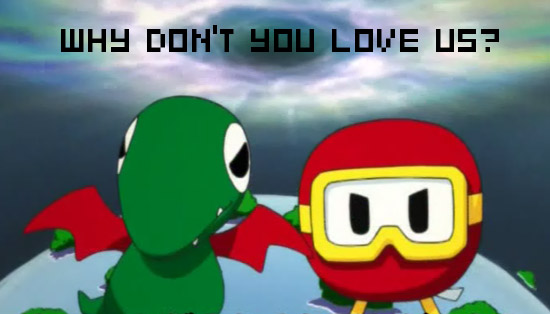 Whatever happened to Dig Dug? I used to love the old arcade version, but that could very well be attributed to the fact that I was four years old when it came out and I thought the main character was a Smurf. The game saw a sequel, a re-release on XBLA many years later, and a crappy DS title, but none of that really caught on the way most other cabinet classics have.

Now Namco and developer VerX have apparently teamed up to take another crack at it, as evidenced by this web site for a game called Dig Dug Island. Judging by the video, the concept looks similar to what they tried to do with the aforementioned DS game, (called Dig Dug: Digging Strike, in which you’d dig under support pillars to break off whatever chunk of your island the boss happened to be standing on) only this time, you’ve got a jackhammer to chip away at the island with instead of a shovel. The other thing you’ll notice is that there doesn’t seem to be any … you know, digging.

Visually, it looks like it’s probably a Wii title, but don’t quote us on that. The site doesn’t specify a platform or even have many working links yet, so the info is pretty limited. (I can read the Katakana, but it just says “Dig Dug Island” and you knew that already, didn’t you?) So there you have it. The character art is really nice, and honestly, it warms my heart to see the baddies from the original again. How about you?