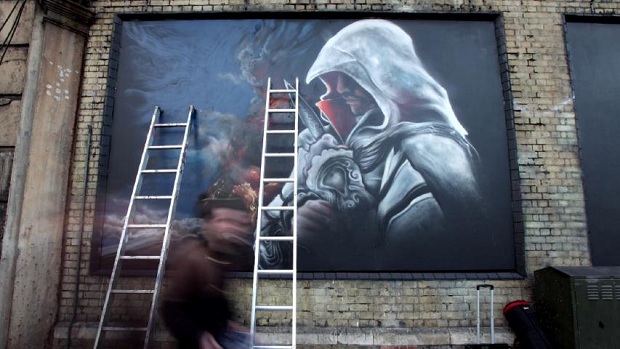 Game publishers have done the craziest things in order to get their upcoming games some attention. So when Namco Bandai goes out to promote upcoming fighting game SoulCalibur V,  I’d expect something along the lines of staging a fight with people dressed up as characters from the game in the middle of a busy street.

Namco hasn’t done this, but instead chose to team up with graffiti artist Jim Rockwell to create an amazing piece of SoulCalibur V art on the Great Eastern Street wall located in East End London. The creation took some 3 days to make, and features the game’s logo in the middle, with characters such as Ezio Auditore from Assassin’s Creed being part of the marvelous display.

Rockwell’s ENDoftheLINE team also made an equally as impressive time-lapse video (everyone loves those) showing the amount of work, preparation and skill that went into this outstanding piece of art. Did I just shed a tear? Yes I just shed a tear.

SoulCalibur V releases on the Xbox 360 and the PlayStation 3 on February 3, so we’re almost there now.