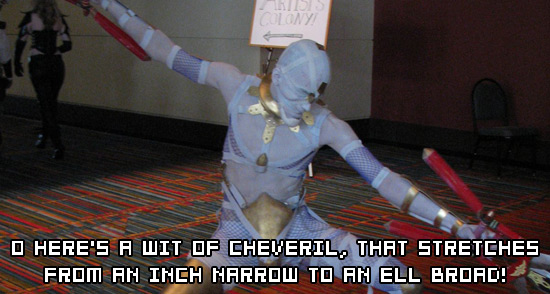 Soul Calibur Legends is the Namco Bandai equivalent of Bob Barker offering to spay or neuter your dog after giving the housewife from Omaha opposite you an RV full of chocolate truffles. You’re dog is going to be pissed, and even if you’re allergic to truffles, an RV would have been totally boss.

According to Kotaku, Game Director Jin Okubo has alluded to a game mechanic bound to induce priapism in all but the dead: one-to-one sword fighting mechanics! Here’s the quote:

By swinging the Wii Remote as players please, in-game characters will perform the exact sword actions that players are thinking of.

Of course, those of you with memories longer than a salamander’s will recall similar claims about the yakuza-meets-third-trimester-abortion title, Red Steel. Namco, however, is a competent developer with a history of putting its vast development resources squarely behind two things: megaton Pac-Man titles and the mechanics of its thoroughbred fighting series. Managing exact one-to-one Wiimote translations is going to be difficult, but short of including Mercutio as an unlockable character, nothing would please us more.