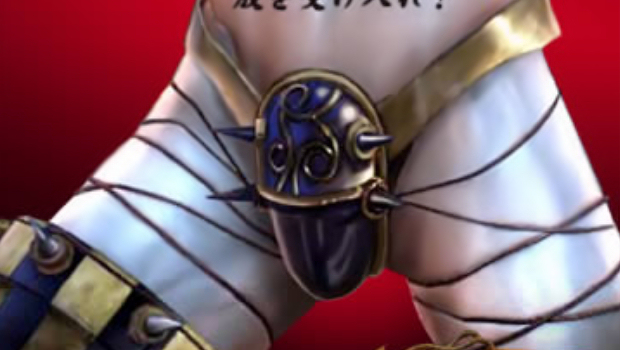 [Update: So apparently it is not real. Stupid sexy Voldo!]

Namco Bandai recently pulled an advert for SoulCalibur V after fans complained that it was too offensive. No, it wasn’t the magazine page featuring ginormous breasts. It was an poster on Facebook featuring its male equivalent — a close shot of Voldo’s ornate codpiece. Apparently, ludicrously out-of-context sexual imagery is perfectly fine until it involves a penis.

By all accounts, the ridiculous ad featuring big boobs (described by myself as resembling two bald men headbutting) still has a green light from gamers and remains in circulation. Poor Voldo’s squirmy sausage, however, is just too shocking for the frail sensibilities of the people. So much for equality.

Interestingly, the Japanese written across Voldo’s midriff reads, “Curious?” Methinks the gamers doth protest too much.