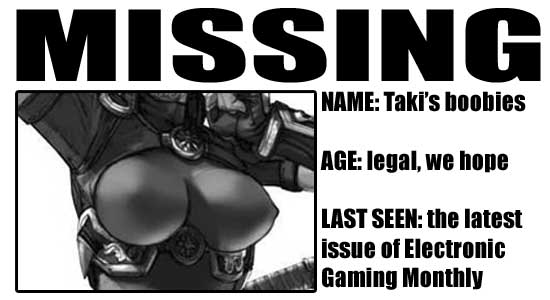 Namco Bandai have revealed their line-up for next week’s E3 Media and Business Summit, and suspiciously (and sadly) absent is a listing for Soul Calibur IV or Tekken 6.

Among the titles that did make the cut include Soul Calibur Legends for the Wii (written in the PR as SOULCALIBUR Legends … wtf is up with the caps and not using spaces?), Beautiful Katamari for the Xbox 360 (no PlayStation 3, folks — drop it already), and Time Crisis 4 for the PS3 (pew! pew! pew!).

Hit the jump for the full run down and what we’ll be seeing next week in Santa Monica.

“Our E3 2007 lineup highlights NAMCO BANDAI Games’ unparalleled commitment to delivering a collection of core franchises, licenses and original properties that will appeal to everyone,” said Genichi Ito, president and CEO of NAMCO BANDAI Games America Inc. “As our industry continues to evolve and captivate the next generation of gamers, we are prepared to meet this market change and engage those who enjoy interactive entertainment with appropriate high-quality content across all platforms and genres.”

Below is additional information on NAMCO BANDAI Games’ E3 2007 lineup:

Ace Combat 6 marks the debut of NAMCO BANDAI’s premiere flight action series on the Xbox 360 and is the most robust Ace Combat game to date. With photorealistic HD graphics, a massive selection of authentic licensed combat aircraft and new gameplay mechanics that let players control allied units across land, sea and air. Players can also engage in competitive and cooperative online dog-fighting for the first time in the series’ history via Xbox LIVE .

The King of All Cosmos, the Prince and all his cousins are back, making their debut in high definition on the Xbox 360 in an all-new wacky adventure. With new mission types, cousins, online multiplayer support for up to four friends via Xbox Live and the series’ timeless rolling gameplay, it’s the most outlandish Katamari adventure yet!

The strategy of board games and depth of collectible card games come together on the Xbox 360 with Culdcept SAGA. Build your own custom deck from nearly 500 unique cards, amass territory and engage the enemy to bring peace to your war-weary homeland. Players can also customize their characters and put their custom decks to the test in massive four player online clashes.

Parallel games with intertwining storylines, Digimon World: Dawn and Digimon World: Dusk immerse players in the Digital World on a quest to fight a dangerous virus. Both games are packed with more than 400 different Digimon across eight distinct species for players to capture, train and evolve. Furthermore, rare Digimon can only be found in each respective version of the game. Featuring full online play via Nintendo Wi-Fi Connection, players will be able to trade and battle their unique Digimon teams against others from around the world.

Collect, train and evolve more than 140 Digimon in Digimon World Data Squad, an original role playing game based on the upcoming Digimon Data Squad animated series. With new cel-shaded graphics, a memorable storyline and voice acting by the cast of the animated series, players can get up close and personal to their favorite Digimon like never before!

Dynasty Warriors:GUNDAM combines the strategic fast-paced action of KOEI’s Dynasty Warriors series with the rich heritage and futuristic storyline of the GUNDAM universe to create an entirely original gaming experience. Thrusting players into massive battles with hundreds of Mobile Suits battling for the fate of the galaxy, the game delivers intense combat on land and in outer space on a massive scale. Players will be able to customize their Mobile Suit and experience storylines straight from GUNDAM lore as they attempt to turn the tides of battle against impossible odds.

Delivering an epic storyline and RPG gameplay to the Xbox 360, Eternal Sonata allows players to become part of a dream world envisioned during the final three hours of world-famous music composer Frederic Chopin’s life. With a constantly evolving environment, a majestic classical music score, breathtaking cel-shaded graphics and an innovative battle system that supports up to three players, the RPG genre takes the leap to the next generation with this incredible game.

The thrilling G.U. trilogy comes to a close in .hack//G.U. Vol. 3: Redemption, as players learn the truth behind “The World” and Haseo’s ultimate sacrifice to save the real world from the grasp of evil. Evolving the series’ action-RPG gameplay, Vol. 3 lets players customize their party with 22 unique characters, transform their avatars into new forms for even more destructive power, enhance their steam bikes and investigate the mysteries hidden deep within massive new dungeons.

Namco Museum DS delivers seven all-time arcade classics to the Nintendo DS – no quarters required! Featuring arcade-perfect renditions of Pac-Man, Galaga, Xevious, Dig Dug II, Galaxian, Mappy and Tower of Druaga, and the handheld debut of the critically acclaimed Pac-Man Vs. with wireless multiplayer support, there’s something for every gamer in this timeless compilation.

Based on the hit animated series SHONEN JUMP NARUTO from VIZ Media, the rich NARUTO universe is at your fingertips with NARUTO: Ultimate Ninja Heroes, as players assemble a team of fighters and battle for ninja supremacy with 20 recognizable characters. Developed exclusively for North America and Europe, experience 3-on-3 team-based gameplay for the first time in the series on the PSP system and upgrade your warriors to create the ultimate fighting force! Create combinations of characters to unlock hidden teams with new and powerful special abilities, rewarding players with unique skills that may help them become the ultimate ninja hero.

Boasting an exciting new storyline, extensive multiplayer cooperative gameplay, multiplayer versus battles and a greatly expanded array of playable characters, NARUTO: Uzumaki Chronicles 2 builds upon the success of its predecessor to deliver an original adventure with more advanced action adventure gameplay superior to its predecessor in every way. Naruto and his allies will face different challenges as they try to unravel the mystery of the Shirogane clan and their nefarious army of “puppet walkers.” Players can expect action-packed ninjutsu missions as well as the chance to explore intriguing locations across the world of Naruto beautifully rendered in 3D anime style.

Take center court with Smash Court Tennis 3! Go head to head against 16 licensed tennis greats such as Maria Sharapova and Roger Federer in intense and realistic tennis matches. Customize the look of your player and learn new skills as you progress through the game’s Pro Tour mode, or put individual skills to the test in unique mini-games such as Bomb Tennis and Pac-Man Tennis.

The unparalleled weapon-based fighting series redefines itself on the Wii with SOULCALIBUR Legends, an original action-adventure that lets players battle around the world to unify the pieces of the cursed sword, Soul Edge. Bringing unprecedented combat depth to the genre, this tale of souls and swords burns with upgradeable weapons, a variety of playable characters as well as competitive and cooperative multiplayer modes.

Put your entrepreneurial skills to the test with Space Station Tycoon! Build an intergalactic business from the ground up while managing the desires of a wacky group of space castoffs. Using the Wii Remote, create gravity points and easily expand your space station, or work together with a friend to run the competition into the ground.

The beloved Tales series arrives on the PSP system with an all-new storyline that reunites 19 characters from previous games in the series. Players can customize their character and take on 300 unique quests as they explore a massive colorful world and engage in thrilling real-time battles.

The definitive arcade shooting franchise arrives on the PLAYSTATION 3 system with Time Crisis 4. Featuring the all-new Guncon 3 peripheral with two analog sticks and six buttons, players will be able to take aim like never before, blasting enemies with a new arsenal of firearms and selecting different paths through each level. Packed with new ways to play including a fully interactive FPS mode and tactical Crisis Missions, Time Crisis 4 launches the genre out of the arcade and into the next generation.