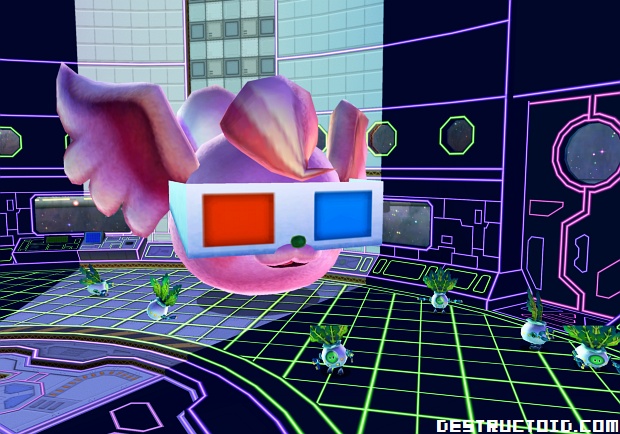 The Munchables may be a major contender for “most entertaining-looking game I never knew existed until today”. An action-adventure from Namco Bandai, the game throws you into the world of the Munchables, a friendly race of creatures whose home planet has been invaded by a bad guy named Don Onion. I don’t know of the giant pink flying thing wearing the 3D glasses in the picture above is a boss or a friend, but either way it looks to be breaking Richter scale levels of awesome.

Two heroes named Chomper and Munchy are the brave souls willing to go up against Don Onion, but getting there means eating your way through enemies. The game also features a total of eight bosses, allows for two player mode and a time-based challenge called Mirror Mode. It also has to be the most colorful game I have ever seen. Cramming any more vivid shades into the title would surely be impossible.

The Munchables will be out this May, although an exact release date is not confirmed as of yet. This is just the kind of silly fun I could use after spending many an evening blasting through the serious business of Resident Evil 5 — looking forward to seeing if this game can live up to the high-spirited screenshots!