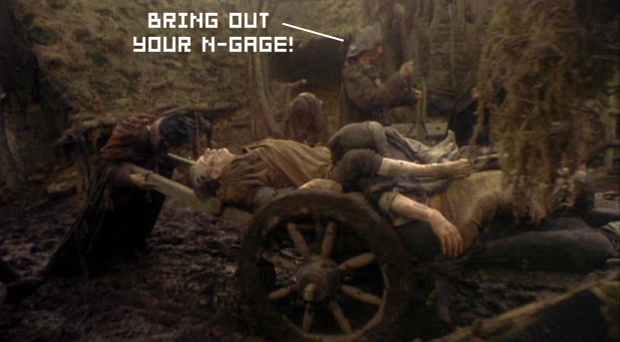 Do you remember the first time you heard about the N-Gage? I do. It was an advertisement in EGM and it had a kid on a skateboard playing the game while jumping at the camera or something. It was horrendous. I’m not sure who they thought they were marketing it to, but I thought to myself that I’d have a good laugh when this thing fell flat on its face and went belly up. It pretty much did so within the first few weeks of its release when sales were terrible, and continued to suck thanks to a plethora of poor design choices. However, it kicked and screamed its way into 2005 (with a few decent games) until the system was basically replaced by smarter, better phones. Games still came out for the platform, but there wasn’t really an N-Gage anymore.

Still, one last vestige of the N-Gage remained, keeping me from having my full laugh. The N-Gage store was still open and the community still existed. No longer. Nokia has announced that as of yesterday the N-Gage gaming service will no longer function and all of its games will be moved over to the Ovi Store. No further games will be pubhlished and on September of 2010 Nokia will put the final nail in the coffin by removing all N-Gage games from the Ovi Store as well. Don’t worry if you happen to have some N-Gage games already because they will still work, but any community connectivity features will stop functioning.

I can freely laugh now at the failed attempt to capture the cell phone/gaming market. Am I being cruel?