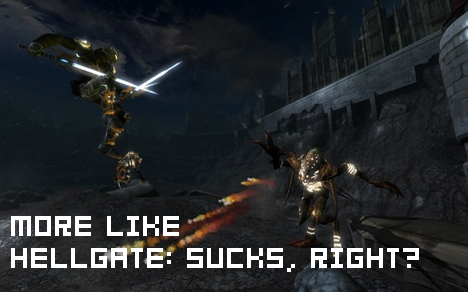 Recently, Mythic Vice President and lead designer Mark Jacobs talked to MTVMultiplayer about why some MMOs bomb out. Specifically, Jacobs mentions the cataclysmic failure that was Hellgate: London and the turnaround of players from Age of Conan to World of Warcraft. Jacobs prefaces the conversation by stating that he’s well aware that MMOs have the “highest failure rate of any entertainment product.”

Jacobs concluded that Hellgate: London and subsequently Flagship Studio’s greatest issue was ego, patience, and community. “You need leadership and you need patience…you also need to deflate the ego a little bit,” Jacobs continued by mentioning that a developer needs to listen to community advice, “The test of greatness is to know how to look at it…We might listen to the wrong advice, but we always listen.”

Listening to the players of an MMO is obviously an important lesson. According to Jacobs, it is a lesson that Funcom may be learning the hard way with Age of Conan in regards to its deflating player base. Jacobs states that while Conan had “great sales initially” it was a result of Funcom failing to fix bugs and “follow up with continued great sales” that has lead to the loss of players.

Jacobs brings up a few excellent points in his discussion. What do you guys think contributes to failure in MMOs? Does community and patience figure into your choice of MMO? Is it the pricing model or some other design of the MMO industry that causes you to move on or ignore?