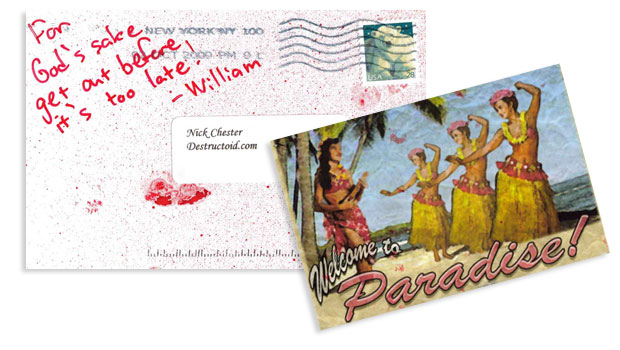 When the above postcard landed in my mailbox yesterday, I was puzzled. I knew it was game-related — unlike those Bosley Hair Replacement flyers I get because some jerk signed me up — because it the shipping label clearly read “Destructoid.com.”

Confused, I turned to the Destructoid editors. Weekend man Matthew Razak had a good suggestion — maybe it was for Dead Island, Techland’s “still in production but missing in action” zombie title. Topher Cantler, thought it could be something else entirely.

“Hula Wii, developed by Milestone,” he said. “The postcard is obviously a warning from a distraught employee who realizes that a company once known for amazing Dreamcast shmups is now making f*cking Hula games for the Wii.”

Well, I slept on it, had an epiphany, and it turns out they’re both wrong. It’s some kind of viral marketing postcard for Dementium II, the upcoming Renegade Kid-developed and SouthPeak-published DS game. The sequel picks up where the original left off, finding William Redmoor trapped inside the Bright Dawn Treatment center (hence the “William” on written on the card). And it’s full of monsters and blood or something.

More details can be found in this Nintendo Power article, which Nintendo Power itself was happy to scan and put on the Internet. We hope this postcard means we’ll get our hands on the game soon; we’re always looking for good scares we can play on the toilet.