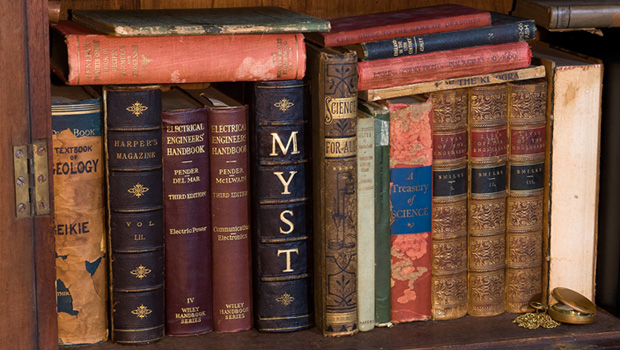 One of the great passions of videogame fans (or fans of any medium, for that matter) is to recreate the items found in the games as real-world objects. We’ve seen countless versions of the Portal gun, no shortage of elaborate costumes with working features, and even various dishes based on appetizing in-game cuisines. The more detailed and authentic the result, the more Internet “win” points the creator will earn.

Mike Andi of Brisbane deserves about five billion points for his replica of a Myst linking book. It’s not merely that the book looks like the one in the game; it literally is the book from the game. More accurately, it’s Harper’s New Monthly Magazine, Volume LIV, Issue 312, December 1876 to May 1877 — the same book that Myst developer Cyan scanned as a texture reference!

Tracking down such a rare book in the right condition was a task in and of itself, but then Mike went about gutting the pages and installing a fully working desktop computer. Now when you open the cover, you’ll be greeted by a 640×480 LED touchscreen “linking panel” with access to Myst Masterpiece Edition, realMyst, Riven, Riven Elementary, Myst III: Exile, Myst IV: Revelation, Uru: Ages Beyond Myst and The Path of the Shell, Myst V: End of Ages, The Manhole: Masterpiece Edition, and Crowthistle, plus extras. I’m amazed that the damn thing doesn’t catch on fire!

This six-year undertaking is so beyond the limits of cool that it’s frozen. If you want this tome on your shelf, Mike’s willing to part with it for $15,625. In other words, make your own, suckers!

A ‘real’ Myst book [Realm of RIUM+ via The PA Report]