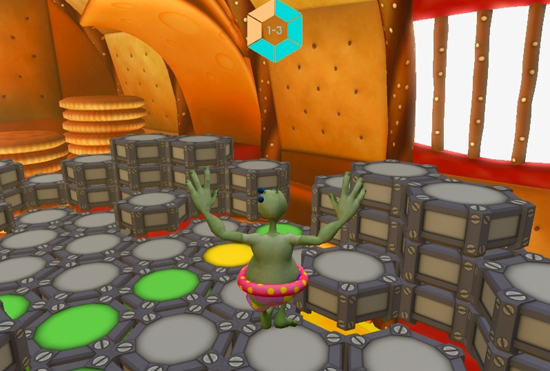 It seems that the ESRB has rated the upcoming Cyan Worlds game Cosmic Osmo’s Hex Isle not only for PC, but for xBox 360 as well. A jump into new territory, indeed. I can’t say if Myst fans will be stimulated by the puzzler, but it looks cute enough. Also it stars Cosmic Osmo, who you may remember from his apperance on computers back in 1989 in Cosmic Osmo and the Worlds Beyond the Mackerel.

The game features 36 leveles of play (roughly about ten hours of gameplay) and features several different ways to play (strategy/speed/score.) It will likely come to Live, as it seems more geared for it than to be released on disc, but only time will tell. The original Cosmic Osmo had no goals and no actual ending, so I’m wondering if they will pay homage to that unusual method or create an ending for Osmo’s adventures.

If you were a Myst fan and hoping for another game or something equally immersive, I’d say you might want to get back to reading the Myst novels and writing your own journals with a feathered quill until the DS reissue comes out.

[Via Siliconera – Thanks Justin!]