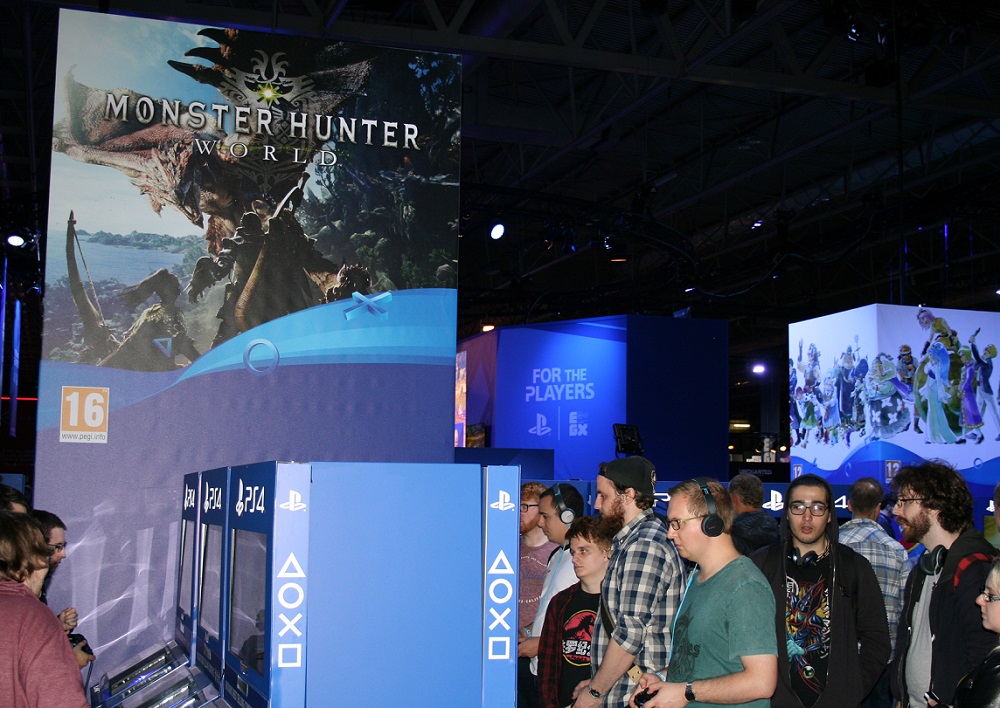 “I only came here to play this!”

I turned my head to see a wide-eyed girl beaming at me like it was Christmas, her eyes glistening behind her trendy millennial glasses. Whereas she was really excited, I was more baffled, as I turned back to stare at the most complex layout of controller prompts I’d seen since Steel Battalion.

This was me at the Monster Hunter World booth at EGX this weekend. Despite the game being premiered at the show, it had been tucked away right in the very corner. It didn’t help that Capcom no-showed the event, leaving it to Sony to squeeze the game between Lego Marvel 2 and a Subway stand. But I did eventually find it and here I was, young and confused, and young left town. 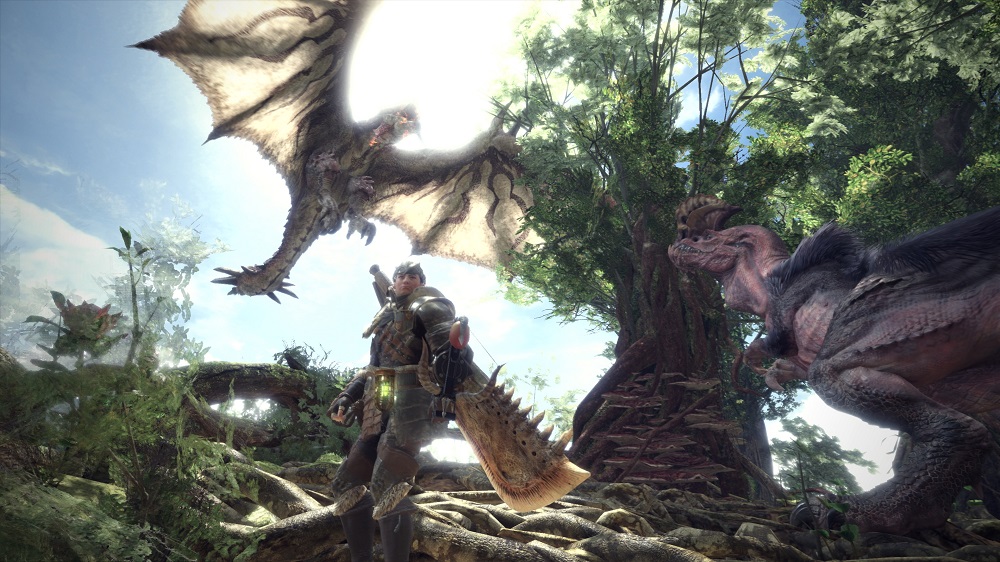 This first thing that hit me about Monster Hunter World were how sharp and detailed its visuals are. The green plantation, sweeping surf and great blue skies were very inviting, had they not been crawling with frikkin’ dinosaurs. It was a world I wanted to get lost in, if only I wasn’t already lost in the game’s equipment menus, which were asking me to tool up from a selection of gear and weaponry, preparing me for a battle akin to a jaunt through Mordor.

Accompanied by steampunk cat-type-thing, Palico, and with the voice of a cutesy waifu guide ringing in my ears, I chose a humble short-sword and shield, before striding out into the unknown. I had orders to track and kill a mysterious beast, until it either tore me asunder or ten minutes were up, whichever came first.

Monster Hunter World is a beautiful looking game and, despite the occasional frame-rate hiccup, moves with fluidity. I personally am not a fan of Bloodborne-esque combat, where strikes have long-winded animations, but my weapon choice shortened that time window. Opposed to this was the behemoth axe I found shortly thereafter, that could morph into a BIGGER axe at the press of a button. Clearly, weapon enthusiasts will squeal with delight at the arsenal of tools on offer. 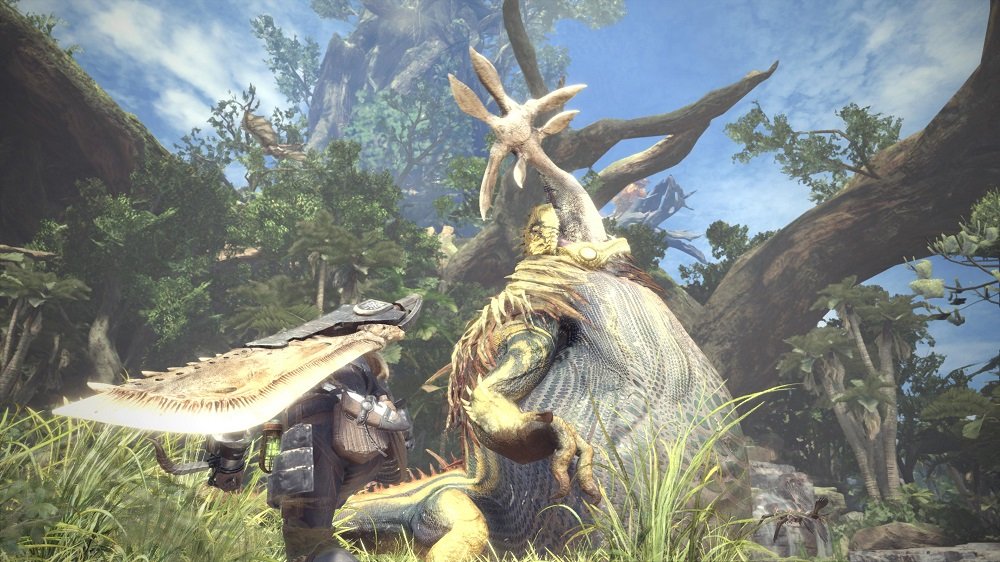 Speaking of buttons, I found the labyrinthine controls wildly confusing. Every single button, both sticks, the D-pad and the touchpad are all utilised, with everything changing context based on your immediate situation. Whilst experienced monster hunters will likely pick things up in no time, new players may find themselves drowning in commands, actions, menus and dials, all of which change with wanton abandon.

Following a trail of footprints and “skidmarks” (lulz) I eventually came across the huge beast, like a giant Komodo Dragon with a huge pulsating throat. I just wanted to run away, but my cat sidekick (speaking in puns, naturally) told me it was time to put a “three-star hurtin” on the beast. So I leapt into battle and simply carved its face off.

Actually, I got taken down quickly and brutally mauled for an age, unprepared for the slow animation that would precede my strikes. Undaunted, I got back to my feet and got to work, using my mobility to circle the creature and pick my spots, chipping away until the monster fell down and lay helpless, kicking its legs and screaming.

“Now, finish it!” said Palico, salivating at the visceral carnage. 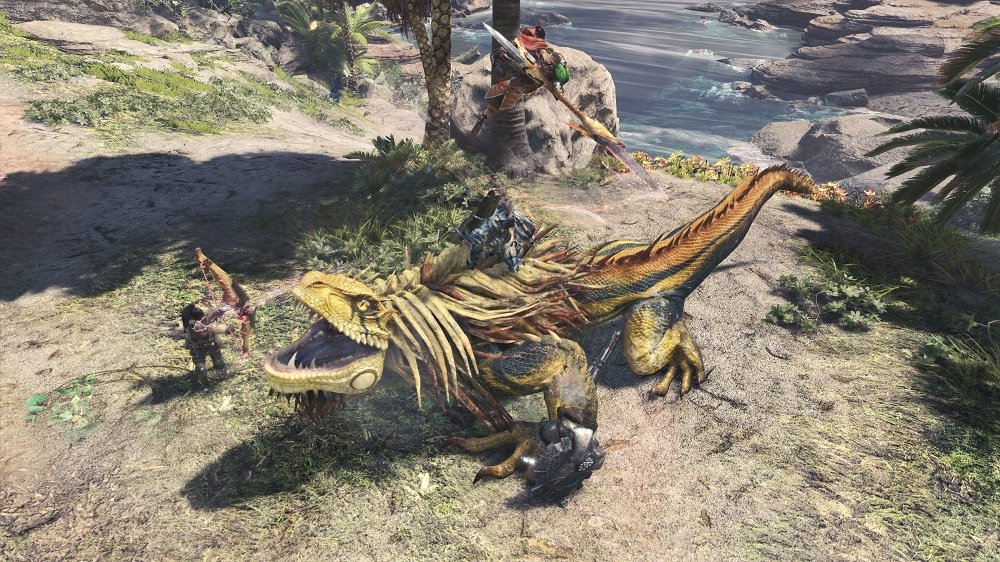 I continued to chop away at the huge lizard with numerous different combo attacks until it regained its footing and limped away to its lair, where I was prompted by Palico, eyes burning with bloodlust, to finish it off. Thus, I followed the crippled creature to its nest and awkwardly sliced the life out its beaten, defenceless form, like the big man that I am.

I had slain the beast, and also gathered some nice flowers along the way.

Then, it happened. As triumphant music played and my characters leapt in celebration, four miniature versions of the creature I had slaughtered slinked out of the darkness to nurse the corpse of their mother, who I had just killed, because someone told me to.

Y’know when Simba finds Mufasa in the ravine? Yeah, that. The young creatures innocently nudged at the still body of their provider and howled with sorrow, whilst Palico, the little fucking bastard, danced a merry jig. Dear God, what had I done? Then, one of the younglings turned to the camera and said “Why did you kill our mom, Chris?” (That’s how I remember it, anyway.)

A Sony rep, noticing I’d finished the quest came over. “Whaddya think?” he beamed.
“I’m a fucking monster” I replied, to which he laughed nervously. Boy, did I feel terrible for my actions. I know these games are hunting games, but some punk once told me the series was basically “like Pokemon”. Sure, if you slaughtered a crippled, bleeding Snorlax and orphaned his kids.

Monster Hunter World was an experience. It’s a great looking game, with an exciting and inviting world. It appears to have a vast gear system and very expansive combat, tracking and trapping mechanics. It even sports a surprisingly wry sense of humour. The creatures I encountered were creatively designed and, although a little jerky, moved well, right up till the moment I made them stop moving.

I don’t think I’m the market for the game, it isn’t a style of combat that I enjoy playing, and the Circle of Life aspects of the game’s theme doesn’t sit well with my broken brain. It may be a fantasy world, but I felt no different killing a grazing dinosaur as I would have had it been a Cabela title. Hell, I once even walked away from the Big Buck Hunter pinball machine without finishing my game.

But, that’s just me, and I’m sure you MH fans will find my upset laughable. I’m fine with that, as The Industry’s Chris Moyse, I can accept your mockery. I think Monster Hunter devotees are in for a real treat with this title. Because as morally odd and technically complex as I found it, I’ll just reiterate the words of the still-beaming gal stood beside me:

“Ohhh shit, that was SO cool!”

Monster Hunter World is available on PS4, Xbox One and January 26, with a PC release to follow.