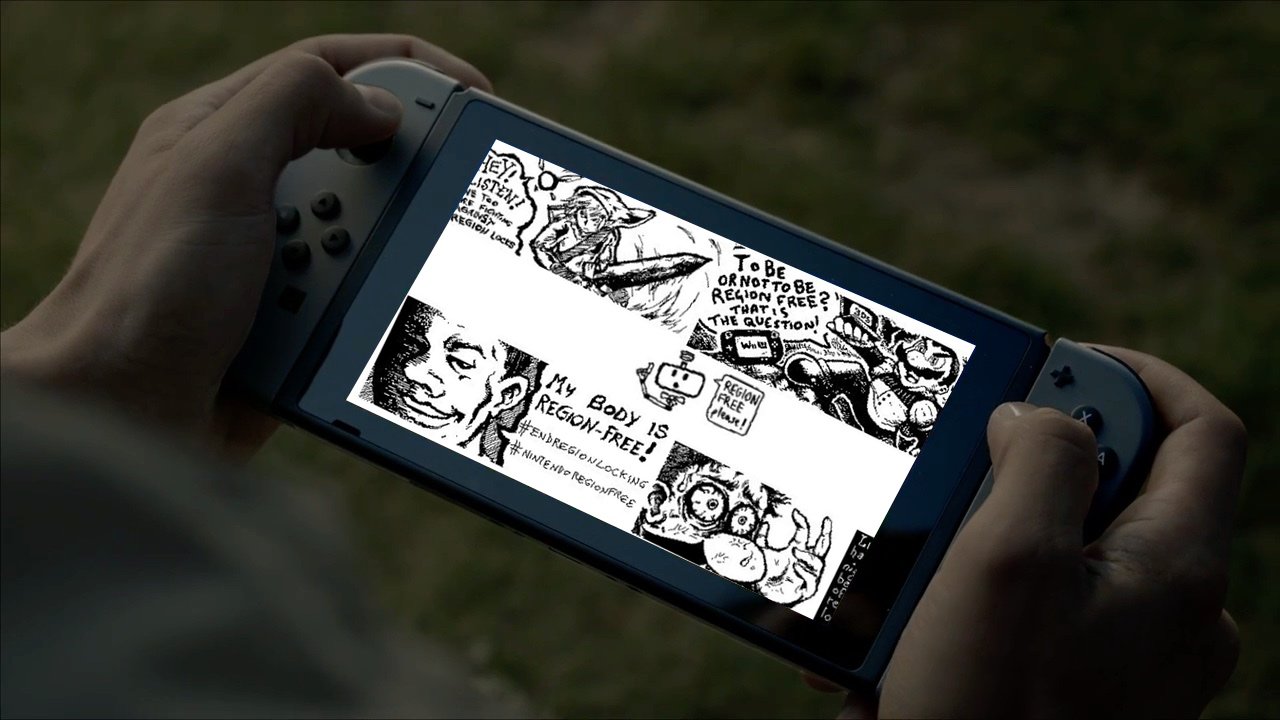 Anyone who has frequented the Destructoid comment sections would know the level of exaggerated vitriol and venom that I’ve spewed forth due to my frustrations with region locking in the past. To put it plainly, I find it to be a highly inconvenient and archaic form of content management that has no place in a modern and globally-connected society. It prioritises the bottom lines of manufacturers and publishers well above the consumer, who sees no tangible benefit from its inclusion.

I’m not here to be as deliberately facetious as I have been in the past when discussing such a topic. Instead, I would like to try and explain my frustrations with region locking. I’d also like to express my hopes that Nintendo – the last major console manufacturer to still employ these kinds of restrictions on its devices – will finally move on from it and embrace the concept of region-free hardware with its new Switch console.

If you want an example of how region restrictions can greatly inconvenience or frustrate users en masse, look no further than the launch of the New Nintendo 3DS.

Satoru Iwata, the CEO of Nintendo at that point in time, mentioned to the media that these more powerful devices would not be making it to the West anytime soon. Despite this statement, the consoles were released in Australia in the November of that year. Strangely enough, if an Australian consumer wanted to pick up a smaller New 3DS console at launch, they’d have to make do with a white unit. When the device launched in Japan, consumers were able to choose between a black or white New 3DS, so the omission of one of the two colour schemes in Australia made little sense. Nintendo eventually did release the black New 3DS in Australia, but that didn’t happen for quite some time.

In North America, anyone who wanted to pick up Nintendo’s more powerful handheld console had to wait until January 2015 in order to even get an announcement as to whether or not it would make it to that region. Unfortunately for North American Nintendo fans, the company confirmed to Kotaku that it was only going to be releasing the larger New 3DS XL in that region. Nintendo of America finally caved in and released the smaller New 3DS in the September of that year.

Retrospectively, the launch of the New 3DS was kind of a mess.

While the removal of region restrictions would not have made the launch of these consoles any less messy, it would have allowed customers in any region to purchase the device of their choosing when they were initially released in Japan or Australia while still maintaining full compatibility with their currently existing library of games. Looking back on the situation now, there were a lot of long stretches of time when individuals were left in a sort of limbo, unsure as to whether or not the particular console they were after would even make it to their shores.

I should stress at this point that I do not assume malice on behalf of Nintendo. I do believe that the launch of these devices could have been handled significantly better, and that communication from the company should have been improved dramatically, but I’d like to think that Nintendo did not deliberately attempt to inconvenience or cause frustration to its consumer base. I also understand the need to stagger the releases of electronic goods in some situations. In theory, it allows the company to test the waters in a smaller and less risky market before moving on to bigger regions, while also giving the manufacturers a little more breathing space with regards to the supply and construction of components and hardware.

With that said, I still think that the option should be made available for enthusiasts and the impatient to get their hands on a new device when it hits store shelves in one region or another.

While this sort of event only occurs once or twice during a traditional console lifecycle, I do think it’s still important to make note of it. After all, there is an established precedent of Nintendo releasing newer and occasionally more powerful iterations of its hardware, and I’d hate to see the launch of a hypothetical New Nintendo Switch become marred with just as many frustrations and roadblocks for enthusiasts.

So let’s move on to a more frequent occurrence; staggered software releases.

Much like how I can understand why a console’s release would be staggered based on region, I also get why the games themselves would be hit with the same kinds of delays. It’s a costly endeavour to release a game worldwide, and for niche products, it may be necessary to determine whether or not it’s worth the expense to even release the title in every region at once. To put it simply, it’s sometimes better for the publisher to launch a game in one region, see how it performs there, then decide whether or not to move on to the next area.

Localisation may also be a contributing factor to a delayed release in one region or another. Even in predominantly English-speaking nations, there are still cultural intricacies that may need to be taken into account. For instance, there is somewhat of a difference between the American and British variations of the English language. Then when you get into territories such as Europe, there are several other languages entirely that may need to be addressed. The end result is that it may take more time (and money) to produce additional scripts and possible vocal tracks in order to best accommodate to another region. This could potentially impose a delay of sorts on the title.

Even if no additional work is being done on a separate or altered localisation, there’s the issue of classification. Again, it takes time and money to submit a title for classification. When there are potentially several ratings boards that stand in the way of a game’s launch in one territory or another, you can see why it may take a considerable amount of effort to release a title to store shelves. This isn’t even taking into account the distribution of the title or possible issues with licensing.

However, when you consider that it took 15 months for Europeans and Australians to see a digital-only release of Shin Megami Tensei IV, or 10 months before Story of Seasons saw a release in those territories, it becomes highly understandable that an inability to import these games would have caused undue frustration and inconvenience to anyone from those territories with an interest in them.

Anecdotally speaking, and as someone who resides in Australia, I know I often find myself annoyed by situations like this. Sadly, it happens far too often.

Then you have situations where publishers expressly state that they have no plans whatsoever to release a game in one region or another. On a region locked console, this effectively prevents anyone in those territories from being able to play the game at all. Just this year, a similar situation occurred with the Sega-published game 7th Dragon III Code: VFD. Thankfully, Deep Silver eventually picked up the slack, and the game will be on store shelves in Europe and Australia early December. With that said, it’s quite a frightening proposition to think that a publisher can prevent entire regions from being able to play its game simply because it doesn’t deem its release in that area to be viable for one reason or another.

To put this into perspective, if the PlayStation 4 was region restricted, Western consumers wouldn’t have been able to discover for themselves that Dead Or Alive Xtreme 3: Fortune really is just as as terrible as Jed Whitaker proclaimed.

The problem of region locks and staggered releases isn’t just exclusive to Europe and Australia. Quite notably, both Bravely Default and its sequel were released in Europe and Australia several months before North Americans could get their hands on the games.

Needless to say, while I’m hoping that the next generation of Nintendo hardware doesn’t face the same kinds of issues that the current this one has experienced, I do not expect companies to change their business practices and habits too dramatically with the turn of a console generation. Instead, I’d like to reiterate that I’d love to see Nintendo become more welcoming to users who may want to mitigate these problems themselves by importing the games they want to play when they are released in one region or another by launching a region-free Switch console.

Putting aside the issue of imports, region locking also negatively affects anyone who travels or is moving to another region entirely. Considering that Nintendo even explicitly marketed the Switch as a device that you can take with you when you travel, allowing players to pick up any game that they acquire while abroad would make the console a much more convenient thing to take with you when going overseas. Users who are moving to another region may even need to purchase a secondary console just to be able to conveniently purchase and play any new games that are released, unless they’re okay with exclusively buying digital titles or resorting to imports for pretty much everything from that point on.

The simple fact of the matter is that I genuinely do not see any tangible benefit to region protections on consoles from a consumer standpoint. The inclusion of region locking on a console just adds an extra roadblock that actively stands between the player and their game.

Now that both Sony and Microsoft have embraced region-free hardware, Nintendo is currently the last major console manufacturer to still utilise this form of software restriction. With the release of the Switch on the horizon, I truly hope that Nintendo is able to finally embrace the present and allow gamers to play whatever hardware-compatible piece of software they so desire, no matter where it originates from.

Let’s just hope that the rumours floating around about the Switch being region-free are true.