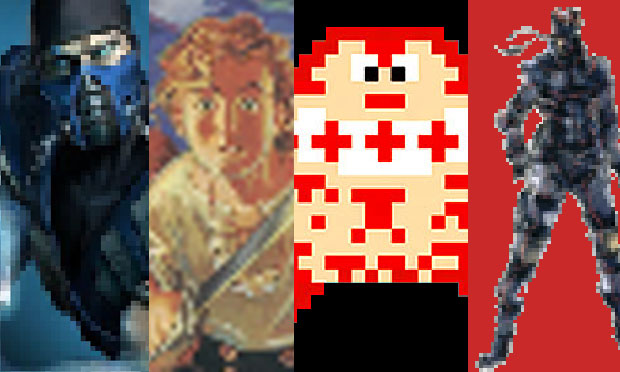 By my definition, any time a new game in a series rejects technological advancements and changes in “mainstream” gaming trends, that’s a rebirth. Final Fantasy IV: The After Years, Mega Man 9, and of course Konami’s own ReBirth series on WiiWare are the best examples, while Bionic Commando Rearmed, TMNT: Turtles in Time Re-Shelled, and New Super Mario Bros Wii don’t quite fit the bill.

Trying to win over new gamers with polygon-based graphics and techno remixes isn’t what a rebirth is about. A true rebirth can’t do anything to remind the player that they live in the age of the polygon. Instead, the game must transport the player backward, allowing them to feel like they’ve traveled ten, twenty, or even thirty years into the past. If you don’t feel “born again” into a prior era of videogame history, then you’re not playing a rebirth game.

This is the sort of thing I think about when I’m driving in my car or waiting for my bread to toast. I don’t think about the economy, or my cholesterol level, or my receding hairline. I think about which videogames could best help me forget about all that “grown-up” garbage.  Hit the jump for the games I think could best do the job.

[Note: I finished writing this post last week. The fact that more than a few of the games here can also be found on Jim’s Ten classic games that didn’t age well post is entirely coincidental.]

For the record, I’ve never really liked Mortal Kombat. There are many reasons for this: the characters all having the same normal moves, the over-reliance on shock value, the crappy animation, and the god damned block button are just a few of the the things that alienated me from the most popular games in the series. I never understood why anyone would ever play Mortal Kombat II over Super Street Fighter II. Actually, I believe that the Mortal Kombat II craze was the very first time I looked at what most gamers were playing and thought, “What the hell do you see in this trash?”, a thought that has crossed my mind many times since.

Well, now that I’m a bit older, I’ve grown to appreciate the first three Mortal Kombat games and the Big Trouble in Little China aura they give off. Seeing people in ridiculous costumes fight each other really is fun, just in a tongue-in-cheek way that I was too serious to understand when Mortal Kombat was actually popular. Since the series has gone the way of the polygon, it’s really lost a lot (if not all) of its plucky, ridiculous charm.

Mortal Kombat ReBirth could do more than just bring back FMV stupidity. It could also work to make right a lot of the things the original motion-capture games did wrong. They could make every character play differently from each other this time, as well as improve the fluidity of the animation, and add more kick-ass monsters like Goro and Montaro.

Seeing a semi-fit dude in a spandex and Ray-bans punch a man with metal arms squarely in the balls made a lot of kids happy in the mid-90s, and I think it could do the same thing for the youth of today.

The time is now for Nintendo to put out an all-new, all old-looking Donkey Kong game. Well, the time was actually a couple of years ago, when The King of Kong was at the height of its popularity. That doesn’t mean it’s too late to harness the newfound appreciation that the film has brought to the hard-as-hell, high-score-hungry days of Mario’s past.

I have to admit, a little part of me died when Donkey Kong Country came out. It didn’t look, play, sound, or feel like the real Donkey Kong. I’ll never be able to say for sure if those SNES games are any good, because their misuse of the Donkey Kong name will always sour my perception of them. Even the newer, more true-to-their-roots Donkey Kong games like Mario vs. Donkey Kong lack that certain Donkey Kong charm.

Donkey Kong on the Game Boy is what I’m talking about here: sprite-based graphics; linear, puzzle-like levels; and mercilessly tough difficulty. Make it look more like the original arcade Donkey Kong, throw in Donkey Kong Jr. (both brown and pink versions) and Stanley from Donkey Kong 3, then put it on WiiWare/DSiWare, and Nintendo could make millions of “lapsed gamers” like Steve Wiebe very happy.

How are you guys liking those new Monkey Island games? Better than nothing, right? Well, how many of you can say that you prefer the way the game looks to the first three games in the series, or the recently released The Secret of Monkey Island: Special Edition?

Well, for me, the series started to lose its thunder soon as polygons and voice acting entered the equation. The polygons lacked the life and beauty of the sprites, and as for voice acting, well, I generally don’t like it when my videogames talk to me, and Monkey Island 4 was no exception. Not only would a new sprite-based, non-voice-acted Monkey Island game appeal to hundreds of thousands of ex-fans of the series who consider sprite-based Guybrush to be the only “real” version of the character, it would be cheaper to make and easier to distribute than the Monkey Island stuff that Telltale is making now.

Anyone who has played the WiiWare ports of Tales of Monkey Island can attest to how much a bad port can break a Monkey Island game. Go sprite-based and subtitled, and a new Monkey Island could easily fit on every modern console, from DSiWare on up.

People have been asking for a new home-console-based 2D Metroid since Super Metroid came out. Metroid Fusion was nice on the GBA (and the GameCube’s GBA player), and Metroid: Other M looks promising, but they both sort of miss the point. Super Metroid showed the world how amazing it can be to explore an intimidatingly large, mysterious, beautiful, and dangerous world made of 2D sprites. This is an experience that can only happen in videogames. 2D sprites, when viewed on a big screen, can be like a piece of minimalist art in motion, like an animated mosaic come to life. Super Metroid’s Samus sprite, with its quiet, haunting standing animation, was one of the first games to show me how powerful 2D graphics could be.

That’s not even mentioning how much better 2D platformers play on a big screen, allowing for a larger, more interesting field of play and the ability to see exactly how close you are to the things you’re jumping off/on. A slightly shimmering, pixel-perfect jumping 2D Metroid game on home consoles could be a huge deal. If done right, Shadow Complex would pale in comparison.

Here’s the thing: I just want more Metal Gear, and I want it to be less than 50% cut-scenes. I’ve come to terms with the fact that no 3D Metal Gear game is ever going to give me that. As everyone knows, Kojima consistently uses the Metal Gear games to make interactive CGI movies now. They’re great movies, too, but I still want Metal Gear games I can play.

There is also something to be said for the special old-school-meets-new-school experience that the good (meaning, MSX) 2D Metal Gear games provided. Combining Pac-Man-style hide-and-seek with Zelda-style arsenal building and puzzle solving, all with a Hollywood action film twist, was a stroke of genius. There’s nothing quite like observing the battlefield from up on high, being aware of the placement of every enemy, and guiding 2D Snake against impossible odds through a veritable minefield of traps, jerks, search lights, and freaks.

Man, it would be so kick-ass to see an MSX-style sprite of Barack Obama giving shit to Solid Snake, then treating him to a tasty burger at the end of the game.

With the success of Castle Crashers, 2D beat-’em-ups came back to the forefront of the gaming world. That’s why it’s so weird to me that Capcom has yet to do anything with the Final Fight franchise. The last two games in the series, Final Fight Streetwise and Final Fight Revenge, both sold poorly and kind-of smelled, so perhaps that’s why Capcom hasn’t touched the stuff since. That would be crappy logic, though, as neither of those games were co-op beat-’em-ups, and they both featured ugly 3D character models that did nothing to appeal to longtime Final Fight fans.

Good Final Fight games are about witnessing well-animated, highly detailed sprites beating down a horde of unreal, unintentionally funny interpretations of American street gangs. Doing this kind of thing with a diverse roster of playable characters, two-player co-op, and a deep fighting system wouldn’t hurt, either.

Really though, it’s the sprites that I care about the most, which brings me to the last entry on the list.

Really, any Capcom game ever made could use a ReBirth. I don’t care if we’re talking obscure series like Captain Commando, or games that haven’t even been in 2D like Okami — they could all use a dose of Capcom’s unmatched skill at sprite artistry.

Ask any aspiring sprite artist and they’ll tell you that outside of the Metal Slug series and a few other select games (like some of those mentioned above), all of the truly top-class 2D sprite-based games were created by Capcom. Everything from the simple iconography of the early Mega Man games, to clean-but-vibrant work on the early CPS-1 games like Strider and Ghouls and Ghosts, to the silky-smooth, bursting-with-imagination stuff like Darkstalkers and Street Fighter III — Capcom spent over twenty years as the reigning king of 2D game artistry.

These days, I can’t remember the last time Capcom put all their muscle in a 2D sprite-based game. Though Mega Man 9 was a great start, and the DS Mega Man games are decent, they just aren’t the same. It doesn’t have to be that way. I’m thinking that Capcom could once again make waves with all-new, retail-quality, sprite-based titles.

As of the past couple years, 2D graphics are officially out of the doghouse. King of Fighters XII, Braid, Muramasa, BlazBlue, the previously mentioned Castle Crashers, and countless other 2D games are currently making money. Hell, I can’t remember the last time a 2D sprite-based game didn’t make money. Fans of the genre are so loyal, and often, so desperate for a new sprite-based game, that they’ll buy any of the sort they can get their hands on.

The audience is there, Capcom; you just have to tap into it. I mean, can you imagine a new Viewtiful Joe game with Street Fighter III-quality graphics, or a 2D Resident Evil that plays like Castle Crashers?

Okay, now imagine it with good graphics and gameplay, and you’ll get my point.

2D sprites are awesome. They have powers that can’t be found in other forms of art. It took a little while for the shine of polygon-based graphics to quit blinding people to that fact, but it seems that the public can once again see how great a sprite-based game can be. I just hope that today’s game developers figure that out sooner rather than later.