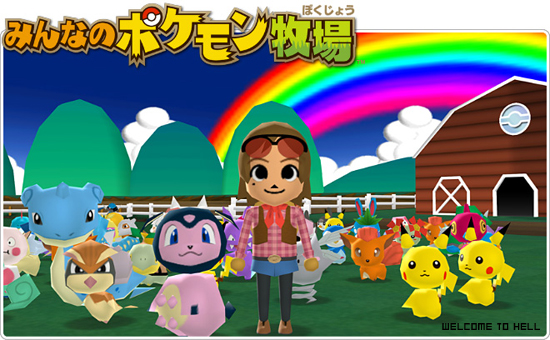 Hey, you know those wacky new Nintendo Miis that everyone (in 2007) is talking about? My Pokémon Ranch, a “game” where Miis and those already cute/ugly cash cows known as Pokémon collide, hit the Nintendo WiiWare service yesterday for 1000 Wii Points ($10 plus tax), and the results are both alarming, strange and mind-numbingly dull.

My impressions of the title, promised to be devoid of any more “let me show you them” jokes, are after the jump.

My Pokémon Ranch is basically a Mii Plaza for your Pokémon, with a few added features thrown in to make the experience a little less sterile. As far as gameplay goes, you can look at your Pokémon from different angles, take photos of them (which can be sent anyone registered in your Wii address book), blow a horn to get their attention, pick them up, read brief descriptions of them, and check out other registered Wii friends’ Pokémon ranches. That’s about it for actions the player can take. Though this is a little more than you can do in the Mii Plaza or the previously released GC Pokémon storage software Pokemon Box: Ruby and Sapphire, it’s still not as much interactivity as an actual videogame would offer, which is a little disappointing.

To make up for the lack of player/game world interactivity, the Pokémon in My Pokémon Ranch make a point to do plenty of interacting on their own. They’ll ride around on each others’ heads, take naps together, blast each other with their respective powers (ice blasts for ice Pokémon, fire for fire types, etc), form totem poles, and fly across the grassy plains — all at random, and all just for your entertainment. The “game” is also sensitive to the Wii’s internal clock, so daytime and nighttime look and sound slightly different from each other. Again, these features are a step up from the Mii Plaza or Pokémon Box, but it’s all far from anything resembling gameplay.

One surprise about My Pokémon Ranch is that it actually encourages you to go back to playing Diamond and Pearl. Haley, the “host” of your ranch, looks at your DS game after you connect it to your Wii, and then proceeds to sticks three Pokémon you haven’t caught yet on in-ranch wanted posters. If you go back to Diamond and Pearl to catch these “wanted” Pokémon and then deposit them into My Pokémon Ranch, you’ll get a reward (as well as three new wanted posters for more uncaught Pokémon). This little incentive actually has me motivated enough to go back and play a little more Pokémon on my DS, which is quite a feat considering I’ve already put in over 100 hours into my Pokémon Pearl game.

Part of me feels like My Pokémon Ranch should have been free. There really isn’t much more to it than other free channels like the Mii Plaza, Everybody Votes, and Check Mii Out channels. However, another part of me appreciates that in order to make My Pokémon Ranch, Nintendo had to create unique polygon models and animations for the 500+ current-gen Pokémon present in the DS Pokémon games. That alone had to set them back some coin. Add to that the fact that Pokémon Box cost $10 more that My Pokémon Ranch, but had none of My Pokémon Ranch’s special features, and this new “game” starts to look like a bargain.

It is a unique experience to see a Mii-ified Deoxys ride around on a Mii-ified Lugia’s head while a Mii-ified cowboy Vladimir Putin stands by and yawns, but is the experience worth your money? If you aren’t the type who has already spent more than $10 this year on Pokémon toys, cards, or other paraphernalia, it’s a safe bet that you’ll not find My Pokémon Ranch to be worth the price of admission. On the other hand, deep-pocketed, OCD-afflicted Pokémaniacs everywhere should be sure to download My Pokémon Ranch post-haste, as it is by far the greatest Pokémon Organizer the world has ever known.

Filed under... #Point and click#Pokemon#WiiWare