They’ll never bury me in my robot

I’ve done a lot of things I’m not proud of in my life. I’ve made a lot of mistakes, missed some opportunities that still feel like a cavity in my heart, know that I’ve done wrong. But if I’m being honest? My number one regret in life is that I never managed to find one of those dope-ass BattleTech centers before they (nearly) disappeared.

I know, my priorities in life might be slightly skewed.

BattleTech Centers are something that should never have existed. The idea was insane, a special mix of ambition and naivety that even in retrospect makes them seem strangely heroic (even if they were doomed from the start). BattleTech Centers were arcade like fun-zones primarily dedicated to one game, for one franchise. While PC gamers at the time would be more familiar with the MechWarrior marquee, it all goes back to the original BattleTech tabletop game, and the associated line of novels, model-kits, and the (unfortunate) cartoon series it kicked off. All of which were about giant walking mechs the size of small buildings blasting the hell out of each other and leveling entire cities with lasers, missiles, and big-ass cannons. 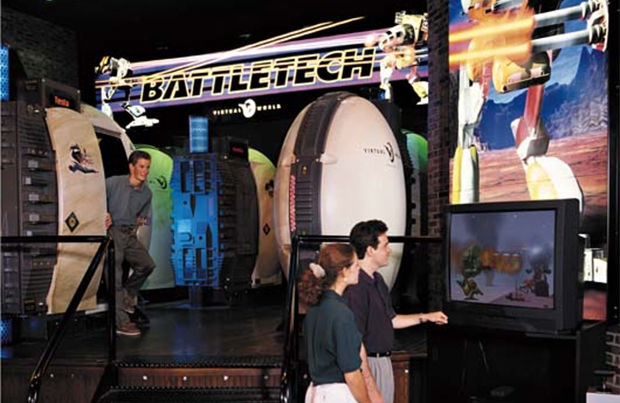 While BattleTech Centers were a video game experience, I’d say they had more in common with a laser-tag joint than an arcade. It was a production; one part video game, one part fantasy. They’d sit you down inside an overly-complex facade of a mech cockpit they called a “battle pod,” complete with WWII bomber-style tail art and mock technical information plastered on the side. Inside were a dizzying array of peddles, throttles, joysticks, and an assortment of quasi-functional warning lights and buttons. The pod was totally enclosed, fully immersing the pilot in the fantasy of actually being in command of a giant war-machine. They’d give you a call sign, have you watch poorly acted in-universe tutorials of how the game worked (staring Jim Belushi of all people!) and print out “after action” military reports (scorecards) of your performance.

Mechwarriors would play a networked multiplayer death match, piloting their giant mech against with other real live humans piloting their own mechs from separate pods. All of this in the year of our Lord 1991. It was astounding for the day. In just a few short years, they’d have the technology to allow players in different BattleTech Centers around the country play against each other, likely the first introduction to online multiplayer for many mech nuts. Again, this is in the early ’90s!

Even voicing the idea out loud, I have no idea how it got off the ground. It sounds like a pipe-dream. A mad fantasy scribbled down in the margins of a high school notebook during the last few minutes of a particularly boring English class. Not something real people would spend real money on. It sounds exactly like the product of one of the “wouldn’t it be cool if…” head-in-the-clouds conversations I’d have with my brother when we were kids.

Even at the absolute height of the franchise’s popularity, I can’t imagine dedicating an entire building to mechanized combat. Nowadays, The Avengers are about the most popular thing on Earth, with their combined movie franchise making more money than some national GDPs. Still, I can’t imagine getting any investors jumping on board to make Iron Man Centers where you strap on some fake Tony Stark gloves and a helmet and shoot repulsor blasts at other players. It’s insane.

Still, BattleTech Centers happened. There was a time when you and 15 or more friends could pile into a couple of vans, drive to a BattleTech Center, and spend the afternoon recreating the 4th Succession Wars of the early 3000s from the comfort of your personal cockpit — and I fucking missed it. 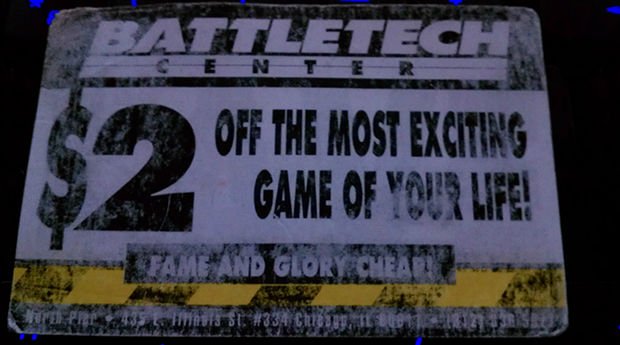 Nothing gold can stay. As the popularity of BattleTech as a whole began to wane, and the general market shifted away from arcades in favor of home consoles, BattleTech Centers around the world began shuttering their cockpits. There were reattempts at the idea. BattleTech: Firestorm came out in early 2000s with improved Tesla 2 cockpits (capable of “Advanced Mission Mode” which actually turned on all of the extra switches and controls in the cockpit, changing them from a cute cosmetic affectation to necessary instruments). But despite a small hardcore audience of enthusiasts, battle pods are on the brink of extinction.

There are a few places still running BattleTech pods, but they are scattered throughout the country and operate on a much smaller scale. A few half-functioning pods tucked in the back of an arcade at a Go-Kart track in New Mexico. A small mech cache in Houston that is only open on occasional weekends or by appointment. Or the Fallout Shelter Arcade’s wandering BattleTech exhibition that travels between conventions and events, dropping pods in the middle of a show floor for curious attendees.

Even with these last few preservationists, the clock is ticking. The machines are getting older, spare parts and the knowledge to repair them increasingly scarce. Soon, the few remaining pods around may suffer the “lostech” fate that befell the advanced Star League technology of the BattleTech series (an end that is deeply depressing to the part of me that still wants to climb into a cockpit, and bizarrely exhilarating to the part of me that is a bone-deep MechWarrior nerd).

Look, I know these centers are dead for a reason. I get that they were cheesy as hell even when they were new. I know the games probably haven’t held up. The once quasi-mystical LAN multiplayer experience is completely unnecessary these days and there are any number of better mech games and pilot sims to spend your time on.

But good lord, I just would have loved to have gone to one back in their heyday. Just the idea of dragging a few of my friends and family (who aren’t obsessed with giant robots) to one of those centers puts a smile in my heart. Sitting through the terrible videos, climbing into one of those big fake cockpits, it’s just the right blend of something I would enjoy both ironically and completely sincerely. Of course I would immediately switch it to the so-called Advanced Mission Mode and spend most of the time flailing about trying to figure out the controls and basically waste the opportunity. I know myself, I’m exactly that kind of jerk.

I guess I should start planning a road-trip to catch up with one of the few remaining clutches of pods scattered around the country. The big, silly BattleTech Centers of yesterday are gone, and I’ll never get the chance to go to one, but their legacy is still around — at least for now. I don’t want to add another regret to the pile.