I don’t have a ton of experience with survival games. I played The Forest last week for the first time in a couple years, barely remembering how to build a fire when I came upon an outpost that my friends had built with blood and sweat and wood and rope. My initial feeling was a punched-gut jealousy that I hadn’t had the time to delve into a survival game and walk away with an intensely personal tale of how I scraped my way to success. So with the Steam Early Access launch of Fenix Fire Entertainment’s Osiris: New Dawn today, I saw my chance and ran with it.

What follows is a short tale of a man being an idiot on a distant planet, making a series of poor decisions. 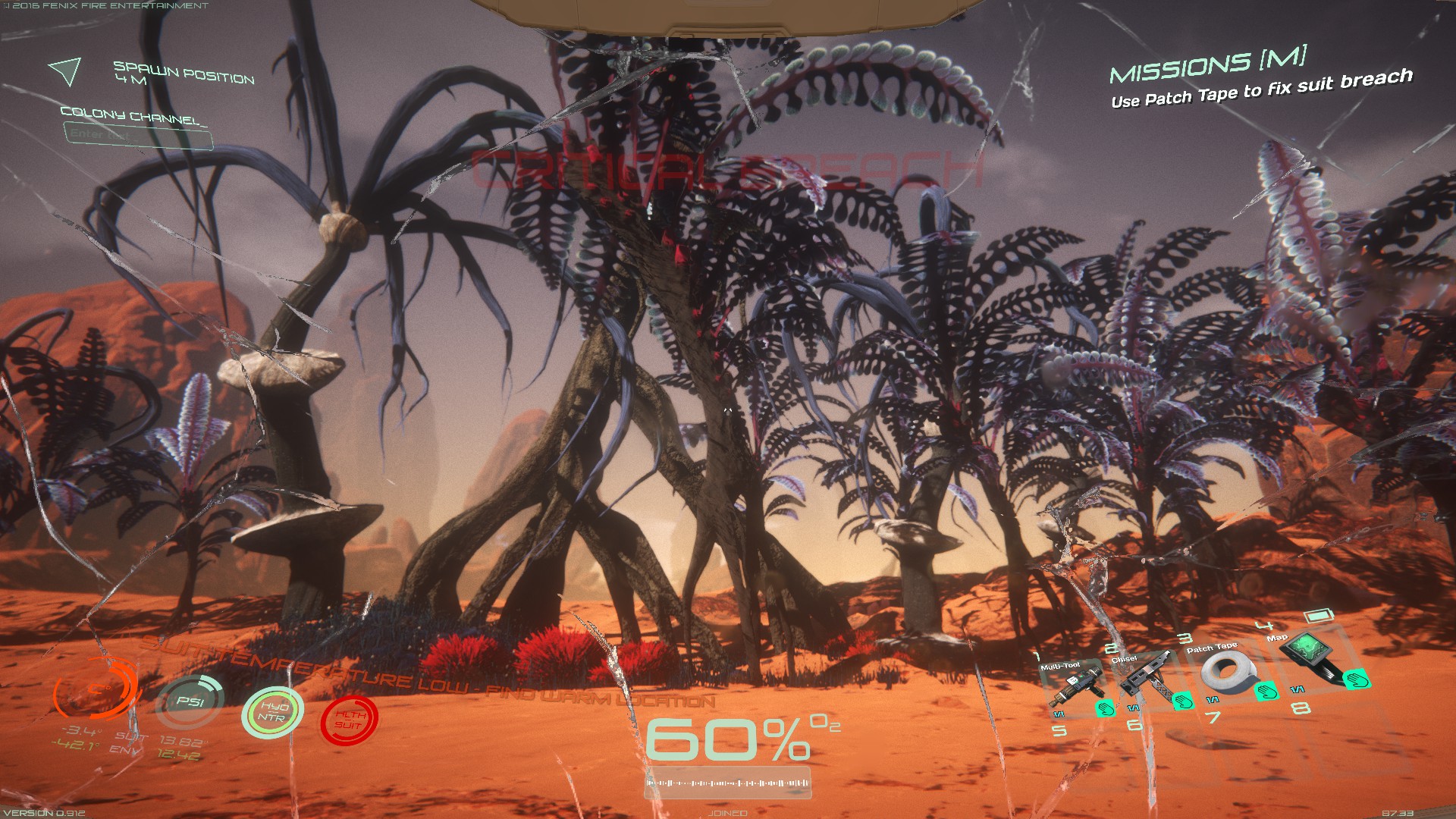 I chose to be a member of the United Nations of Earth, dedicated to studying an alien planet in hopes of fixing shit back home on Earth. The other choice was an Outlander, which are dirty pirates that I have arbitrarily decided I already dislike on principle. I named my character Johnny Spacernaut and decided to play solo so I could learn the basics. The game began with my ship already having crashed, the glass preventing my face from getting sucked out like a vacuum cracked, my oxygen dwindling; my hopes of easing myself into a foreign planet were already dashed against the rocks just like my vessel. 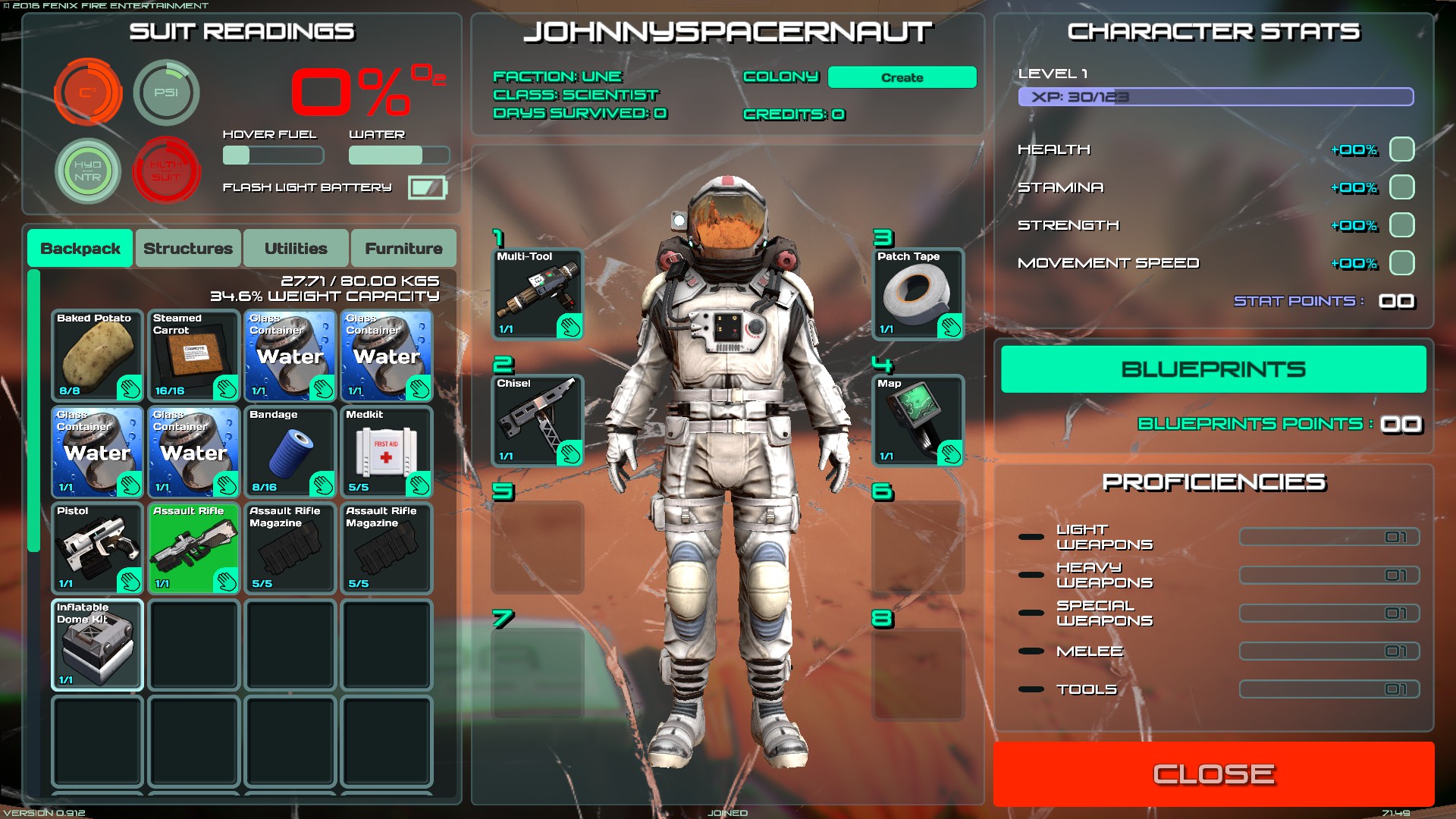 Instead of frantically taping my suit back together before I asphyxiated alone like I had always imagined I would, I lackadaisically meandered over to a survival kit that was filled with baked potatoes, steamed carrots, and water. “You are KILLING it right now, Zack, you didn’t even have to hunt for food, you’ve got this,” I said to myself as my lifeforce ebbed away. I picked up a few more boxes, vaguely thinking there’d probably be tape in one of them for me to take care of business, when I found a gun and played with that for a few minutes. “A gun and food? You are an apex predator, my man, you are unstoppable” I thought to myself, as the oxygen meter suddenly went red, denoting that I had 0% of my oxygen left, and that sprinting to boxes while slowly dying was probably not the smartest move.

That was when my dumb ass realized the tape was on one of my hotbars the whole time and promptly fixed myself up. Of course, that didn’t solve the whole “no oxygen” sitch, so I had to build an inflatable dome, stat. A couple clicks later and I had a new Casa de Spacernaut. 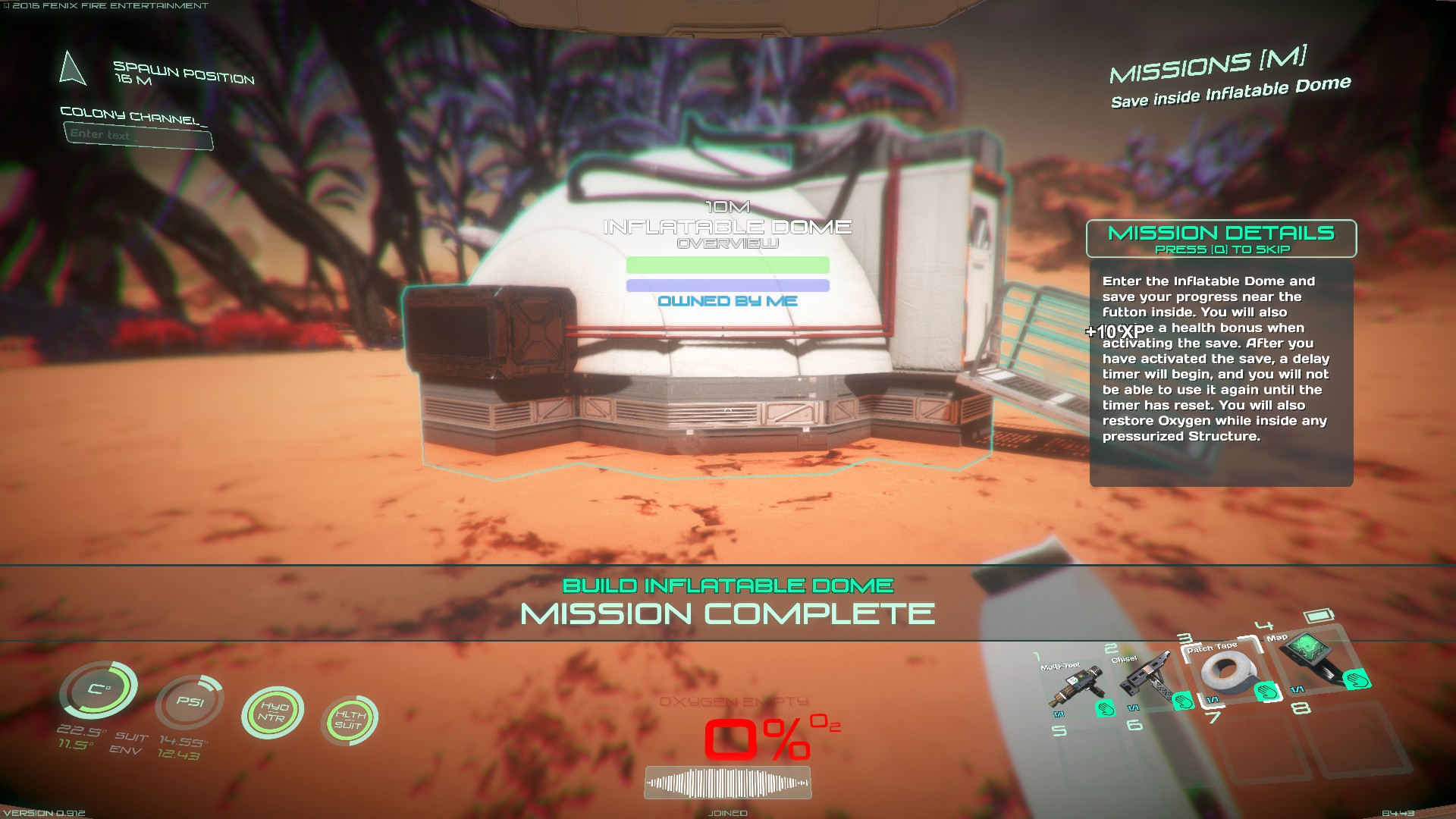 It wasn’t pretty, but I was happy with my instant-noodle home. It had a “futton” to lay on, which let me save my game and heal up. I sat inside for a while after that to let oxygen flow back into my suit before I continued my journey to figure out this planet’s secrets (and how the fuck I was going to get off of said planet). 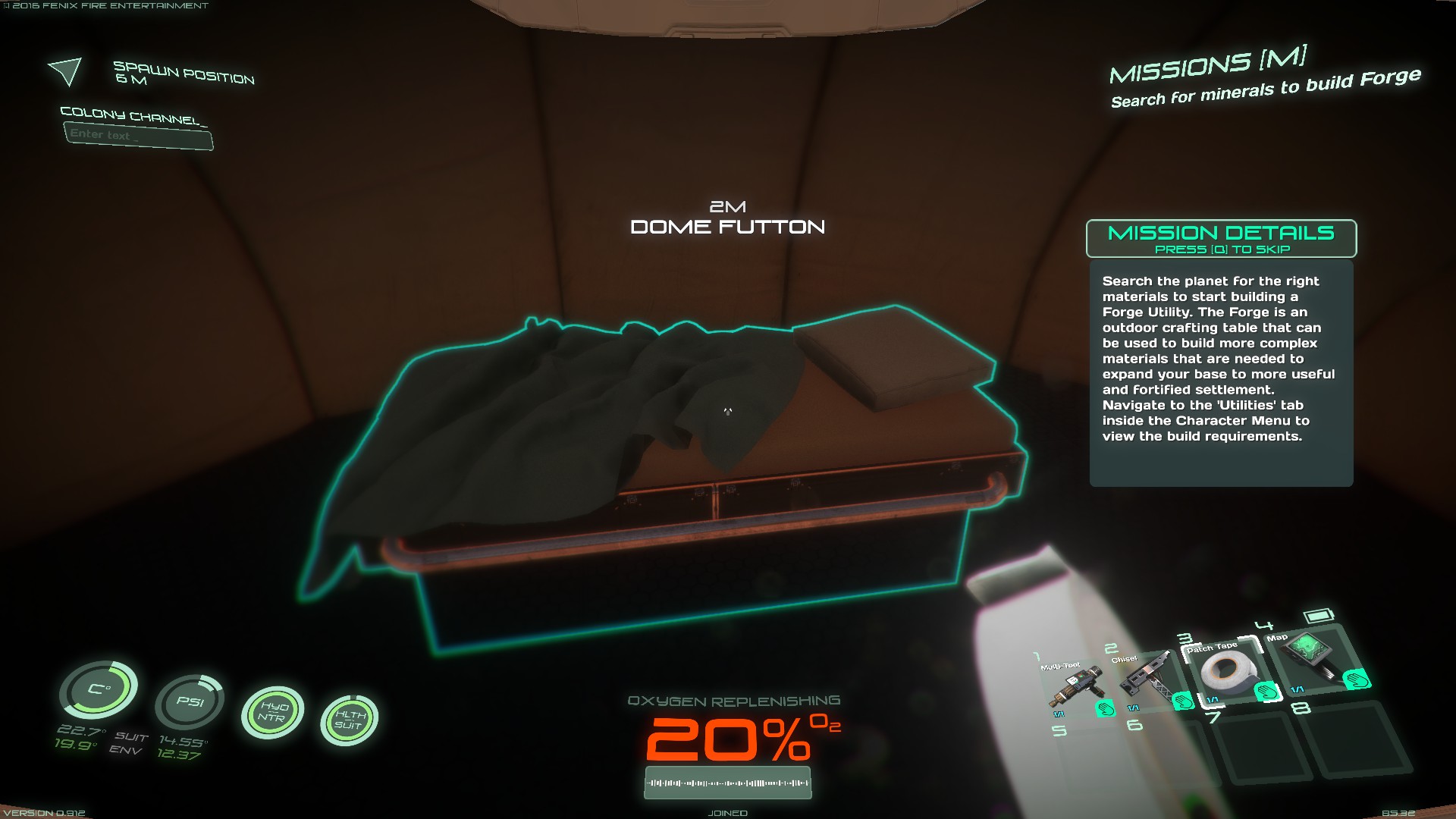 As the oxygen gauge rose steadily upward, I allowed myself and Johnny a moment of introspection. This was about four minutes into Johnny Spacernaut’s Fantastic Spacetime Adventure, and I was already having fun. Within minutes I had formed an attachment to my one-room home and I was dreaming up my new space empire. 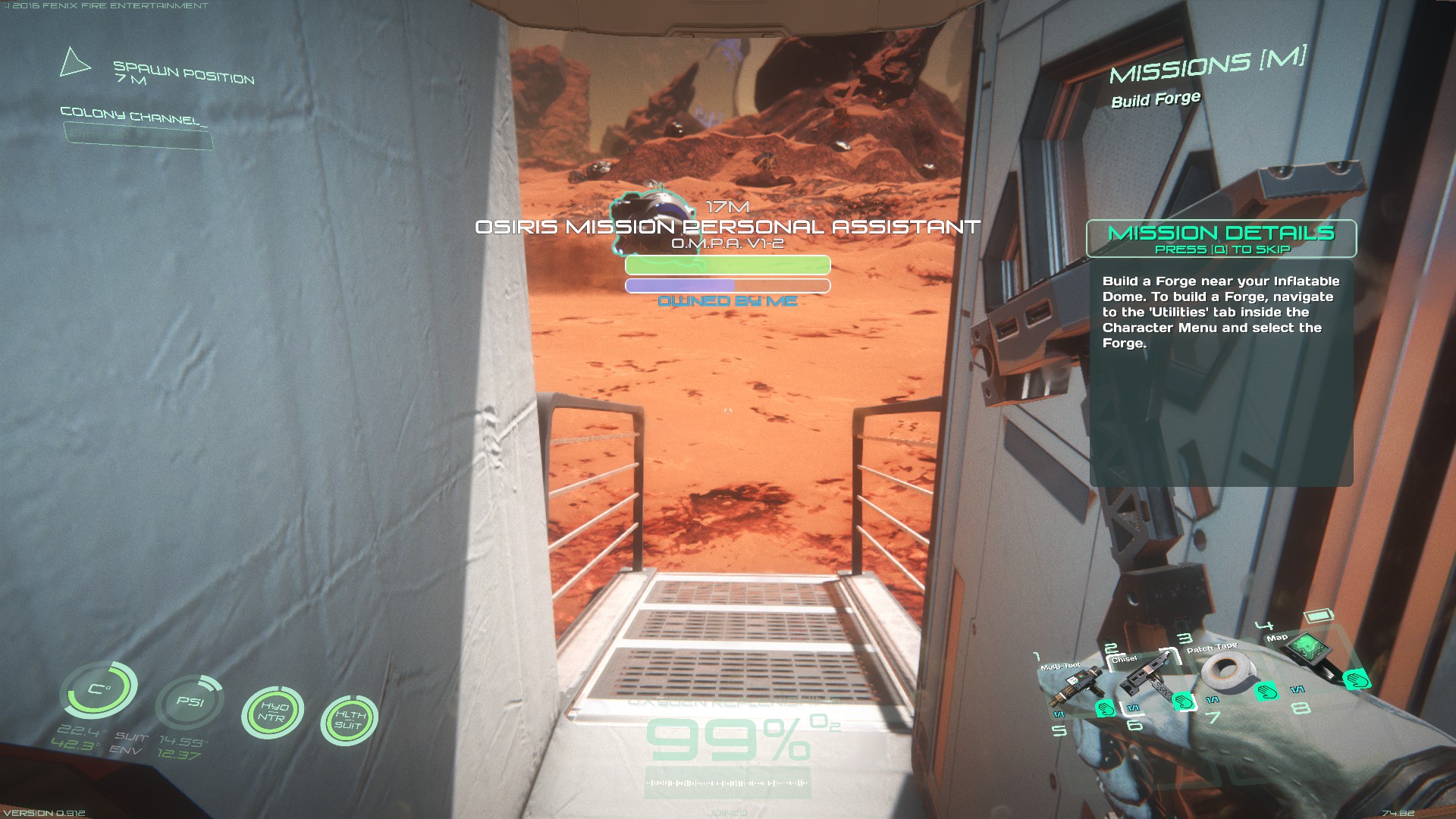 With my suit full and ready to go, I stared out of my home, formulating plans based on the tutorials’ tooltips. It would seem I needed minerals like iron to build a forge that would allow me to set the grand machinations of my dreams into motion, so I armed myself with a chisel and sprinted outside only to be confronted by… 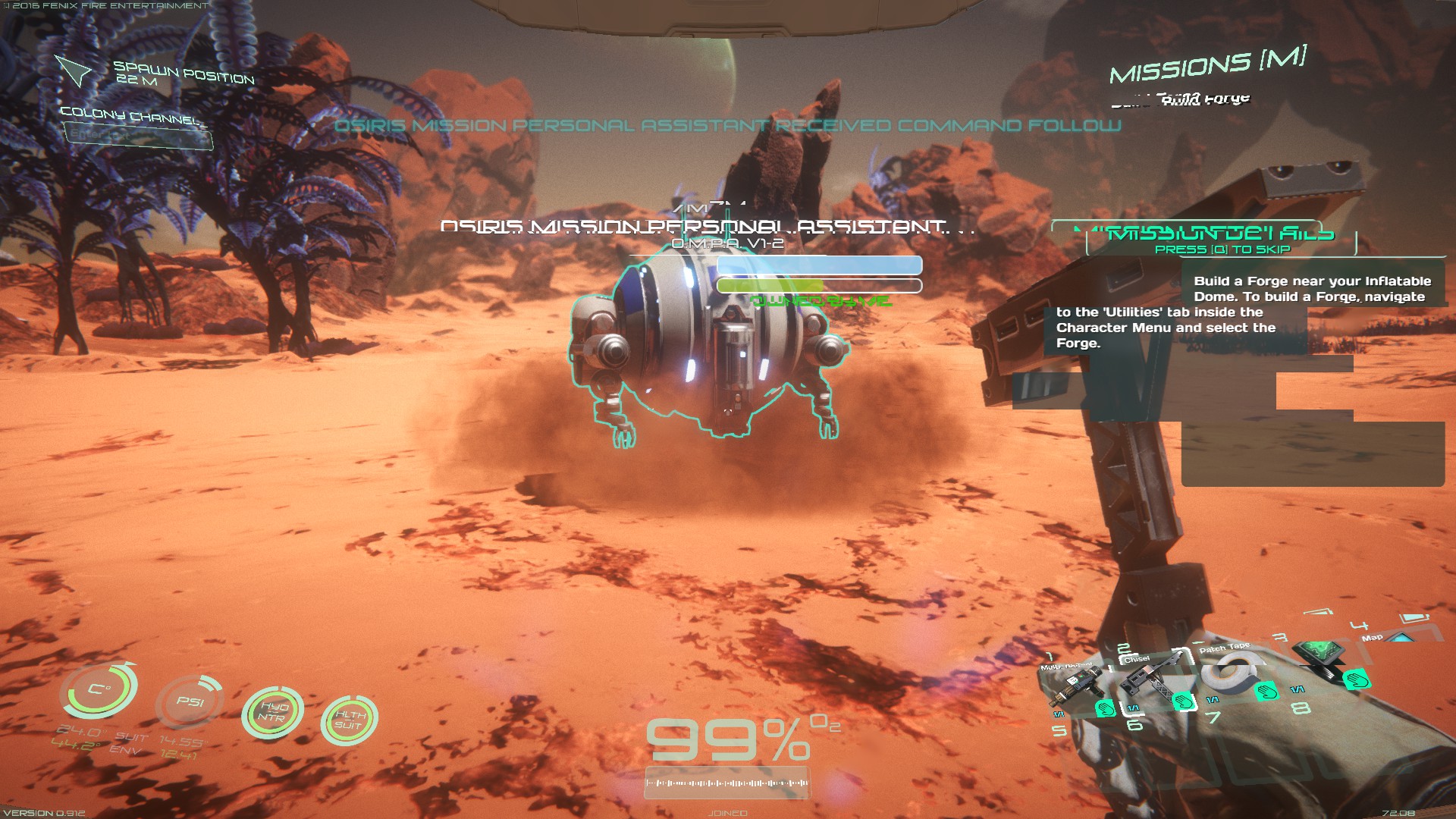 My personal robot assistant that I somehow hadn’t noticed until this very moment. So Johnny and I weren’t alone in this forsaken place. I told him to follow me, and with a new friend at my back, I charged forth towards the first metallic chunk I could find. 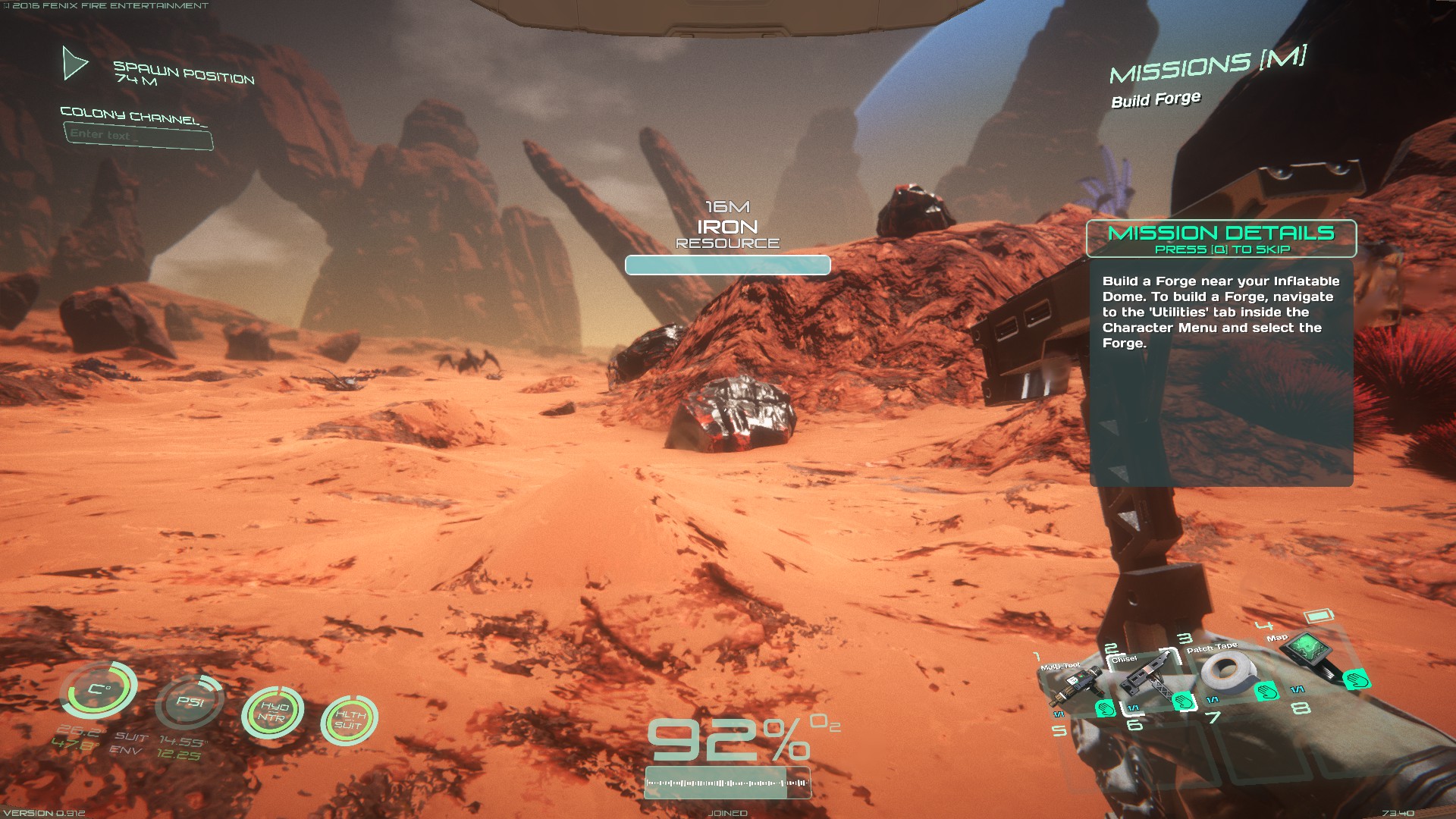 Aha! Iron! I would be building the forge in no time. Yet on the distant horizon, I spotted my next sentient being: is this fucking Starship Troopers, the movie that scared the shit out of a seven-year-old Zack who had watched it much too young? I left the bug in peace, allowing him space as I picked up chunks of metal, fitting them into my space pockets. It was at this time that the space weather changed for the worse: 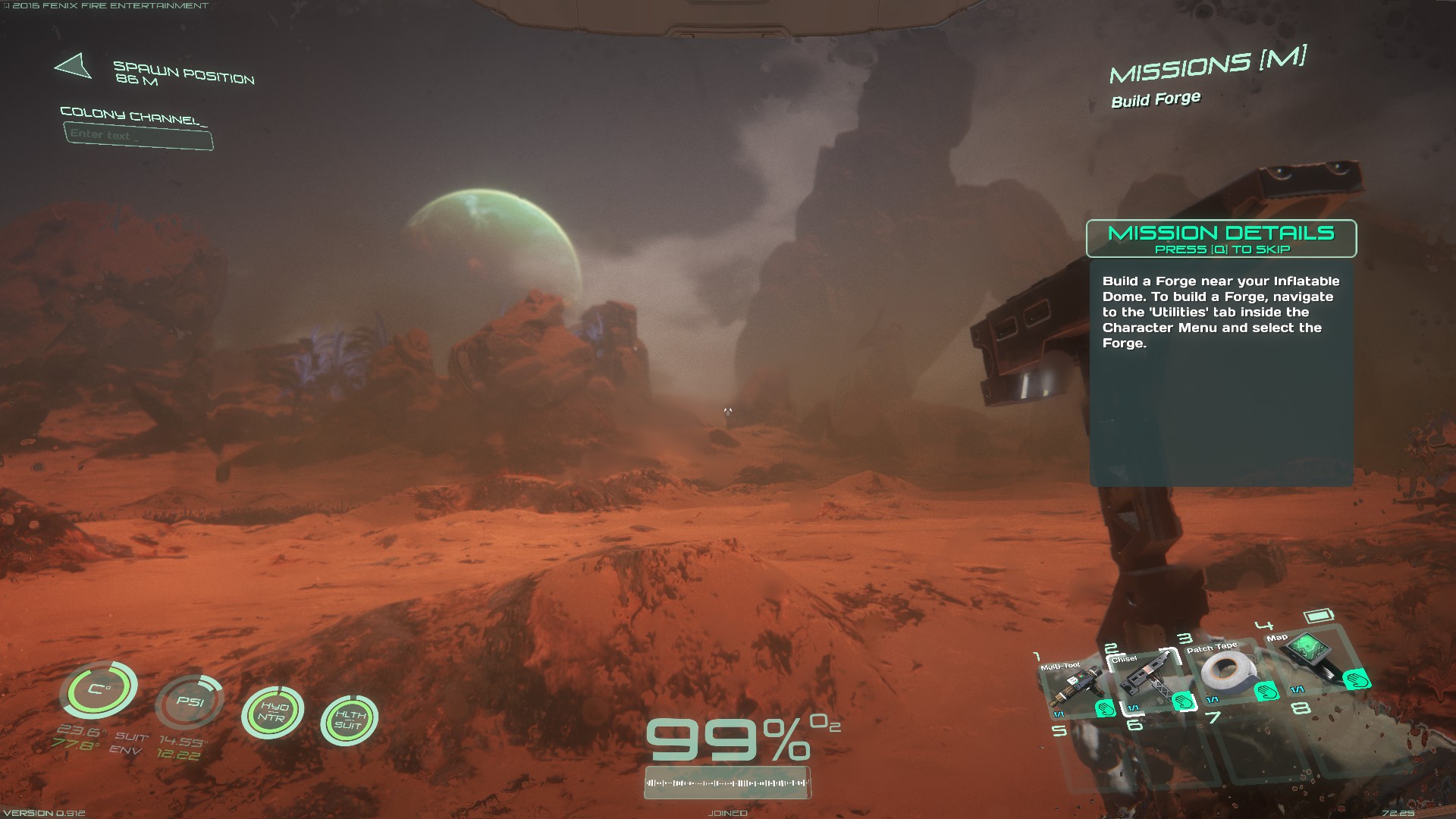 At this point, I realized three things. One, leaving the tutorial on was helpful, but making for bad screenshots, so I decided to be a Royal Badass and turn it off. Two, I was over-encumbered because I had probably a couple hundred pounds of metal (somewhere?) in my suit. Three, the dust storm that was currently enveloping me was getting worse by the second. I headed back to Casa de Spacernaut. 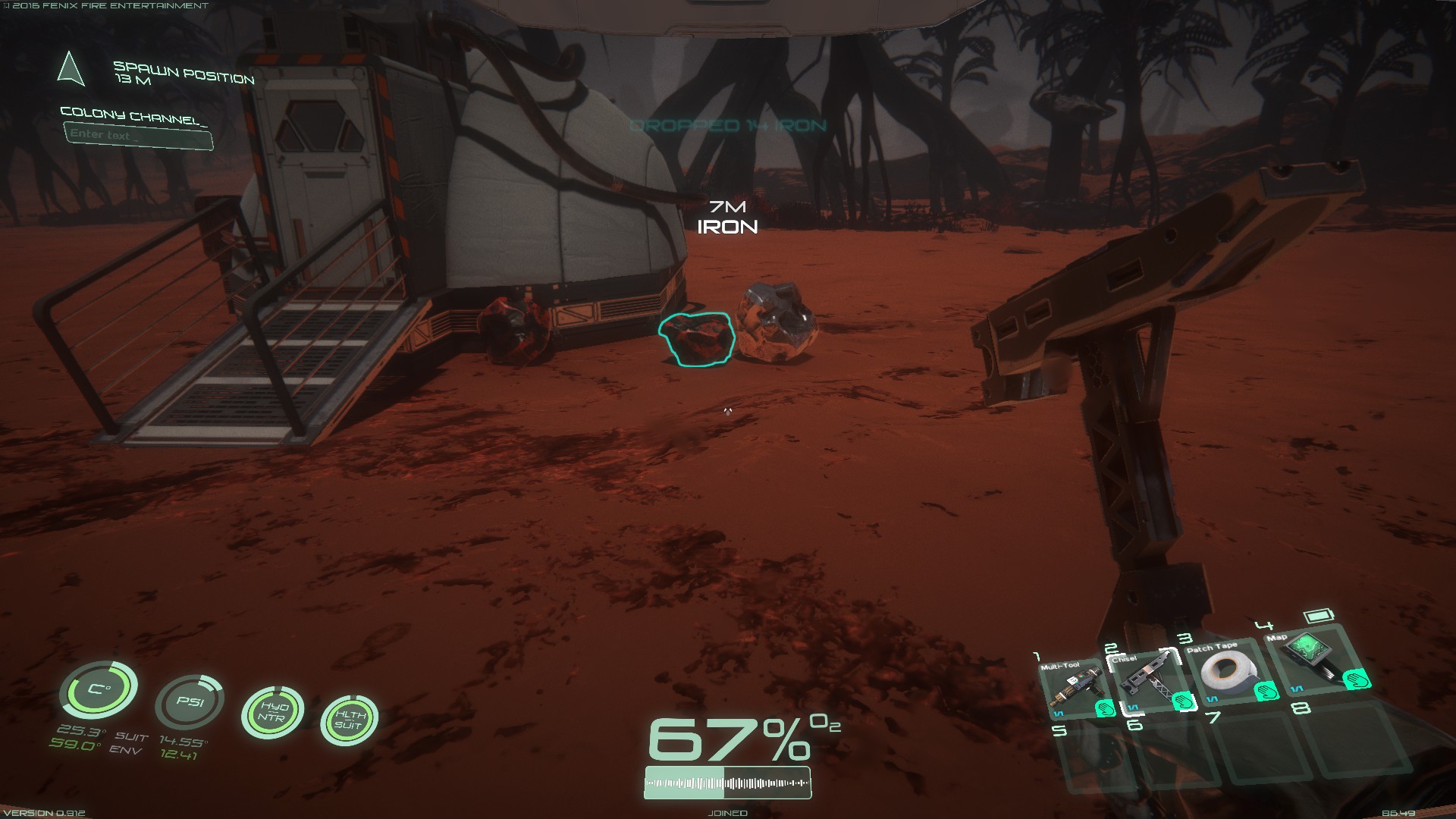 The dust was darkening the skies above, giving my previously hopeful journey a depressingly dreary edge. I would not be deterred though, and a little obscured vision never stopped the true greats from exploring. I dropped my metal chunks off by my house so that I could later return and fuse them with precious-er metals and create that beautiful, beautiful forge that I imagined would let me build a spaceship or some shit (remember, no tooltips at this point). I turned toward a canyon that I had not yet traversed and ran ahead blindly.

To my surprise, the dark sky-dust diffused within seconds. I took this as a sign, thinking that this was the uncharted direction I would conquer, making this small section of the planet my own. Problem was, there was someone there first. 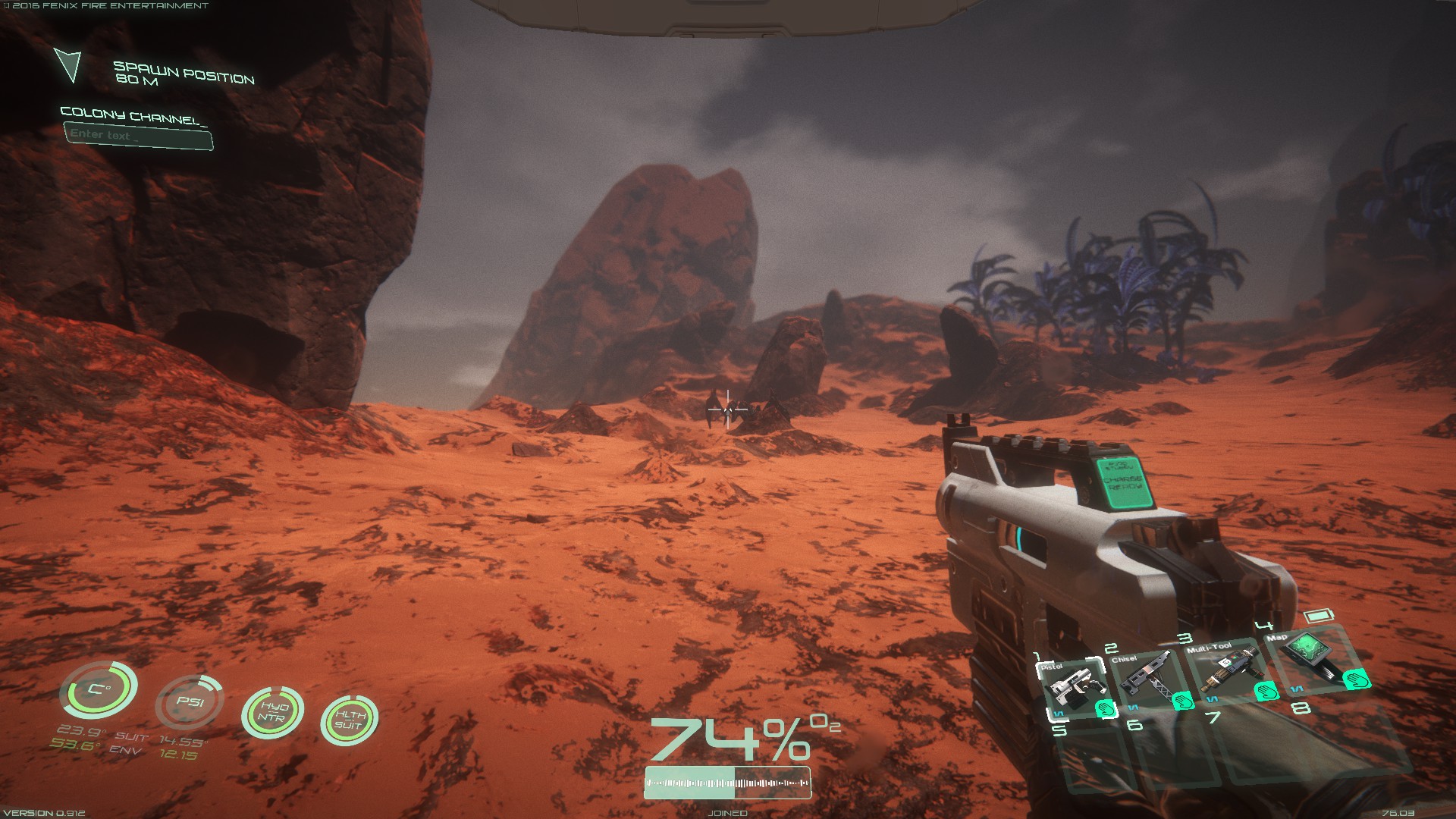 Bug McAsshole was standing in my canyon. Sure, he was minding his own business, doing bug stuff, but he should have thought better of being in my canyon. I pulled out my zappy laser gun and started blasting. Pew pew went my pathetic laser gun, and he started chasing me down immediately. About the time I realized my blasts weren’t doing much, he (maybe it was a she-bug, or a genderless bug, I can’t say definitively, I was new to the planet) was on top of me, raising a massive limb and about to crush me. I knew the end was near… 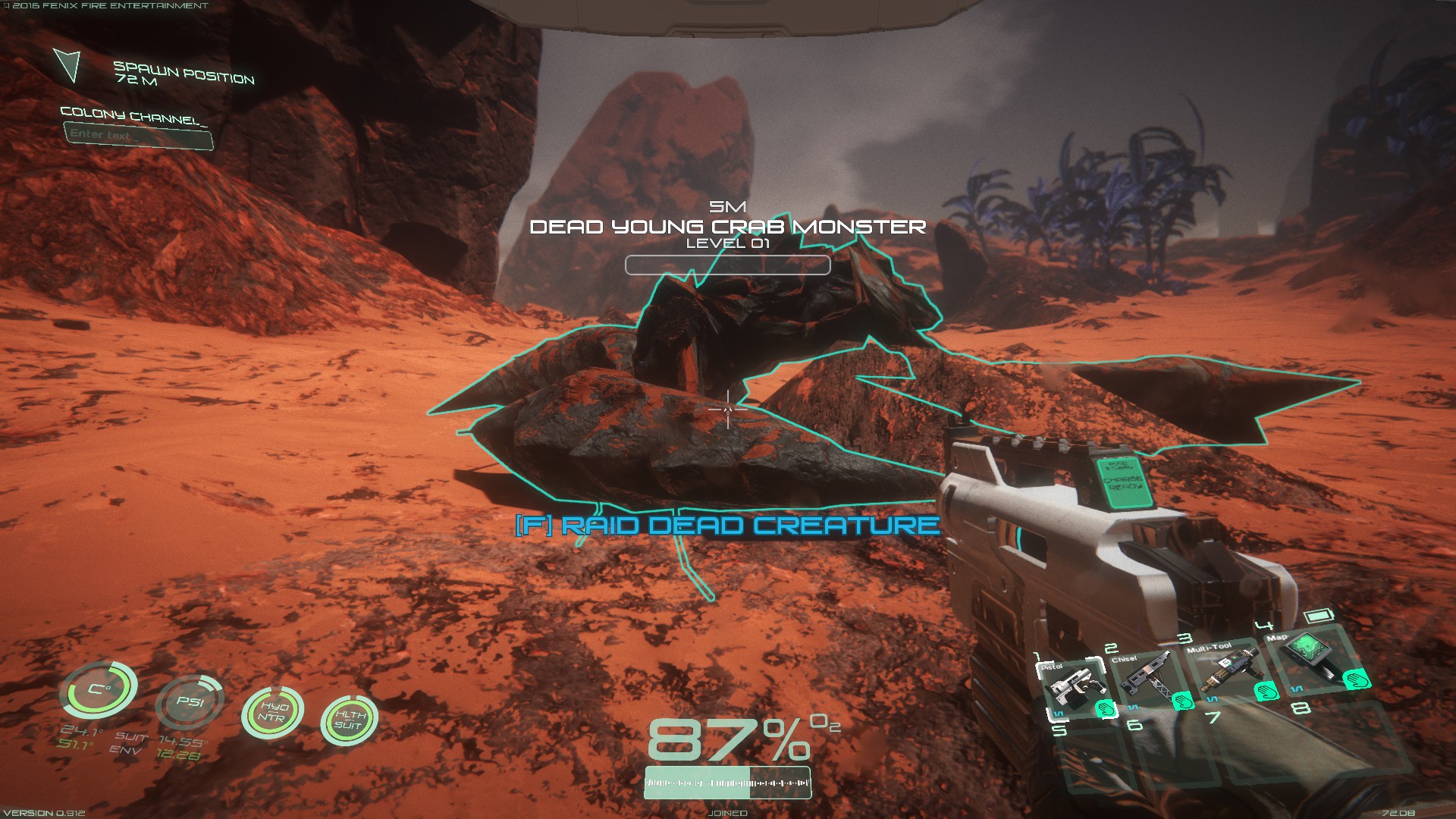 But my personal droid wasn’t having any of that. One attack from him turned the hulking monstrosity into what my visor told me was a “DEAD YOUNG CRAB MONSTER.” Upon realizing that he was but a child, I felt the slightest pang of guilt as I stole the meat from his shell to later roast in my tiny abode. I walked away from his corpse and went up the hill, searching for answers, materials, and morals.

I had all of two seconds to scan the horizon, in awe of the gargantuan skeleton left behind by some colossus I had yet to encounter, when… 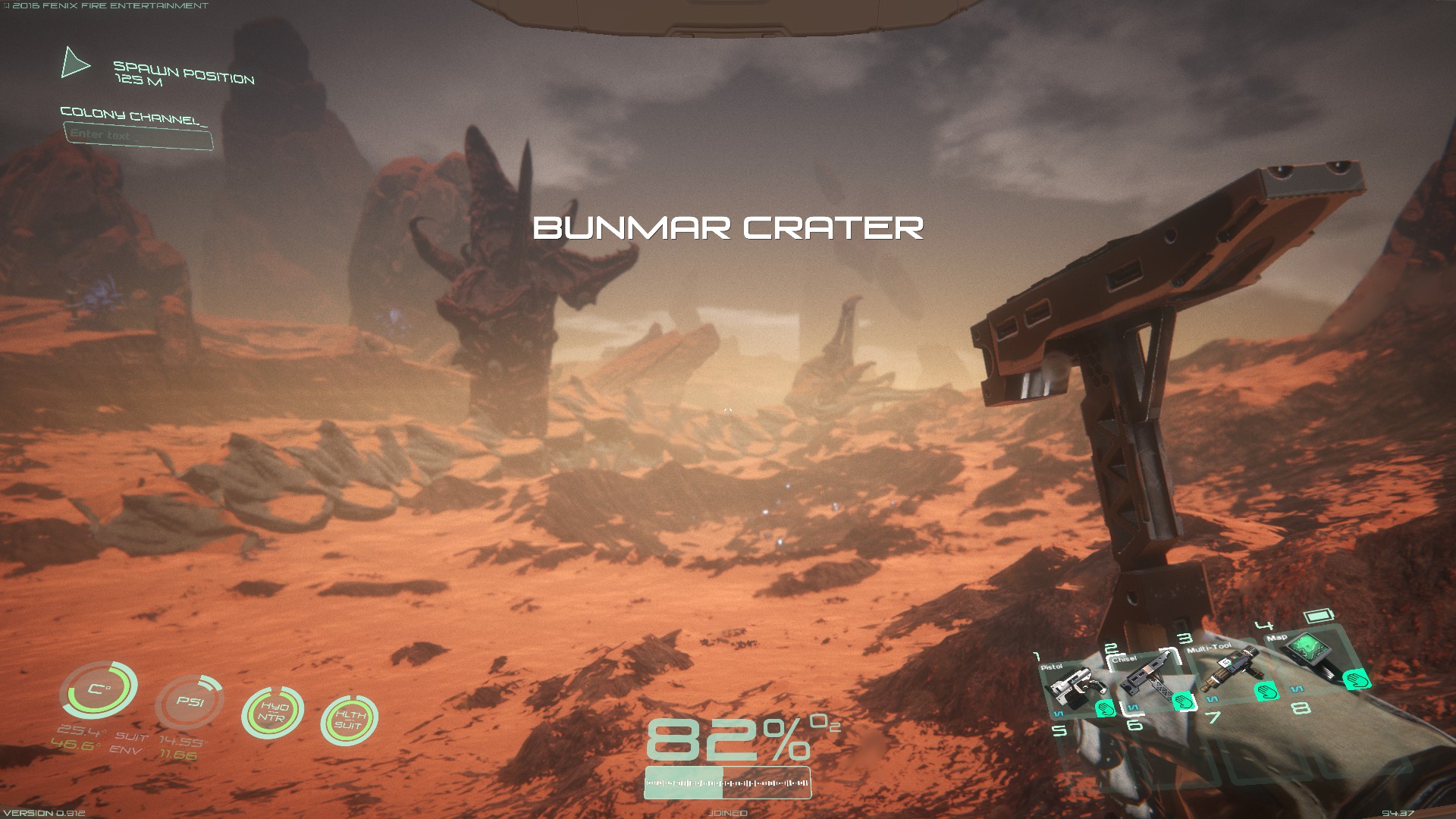 What must have been the creature’s great great great grandchild emerged from the soil, a subterranean beast that was larger than any living creature should be. I marveled out loud at how cool it was that I caught it right when it decided to pop out, memories of Pokémon Snap rushing to the forefront. I had no camera, but I took a screenshot just as I realized that it was heading…right…toward me. 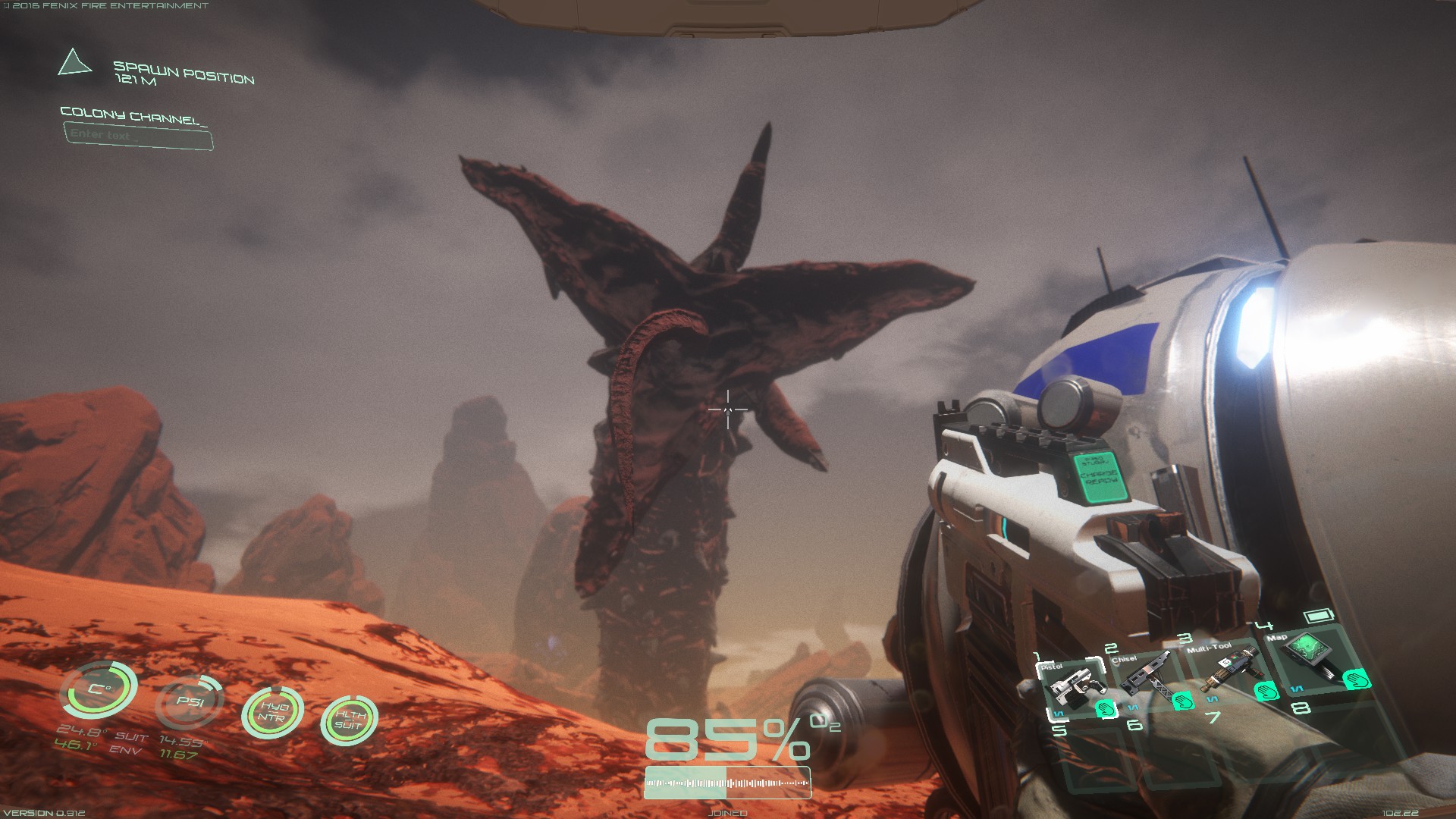 Surely this was some trick by the developer to make me see how diverse the wildlife could be on this planet. It wouldn’t cover a mile’s worth of land to kill me with pinpoint accuracy for no apparent reason (that I had just done this to baby crab was not lost on me), right? I took a few steps back as an evasive maneuver. 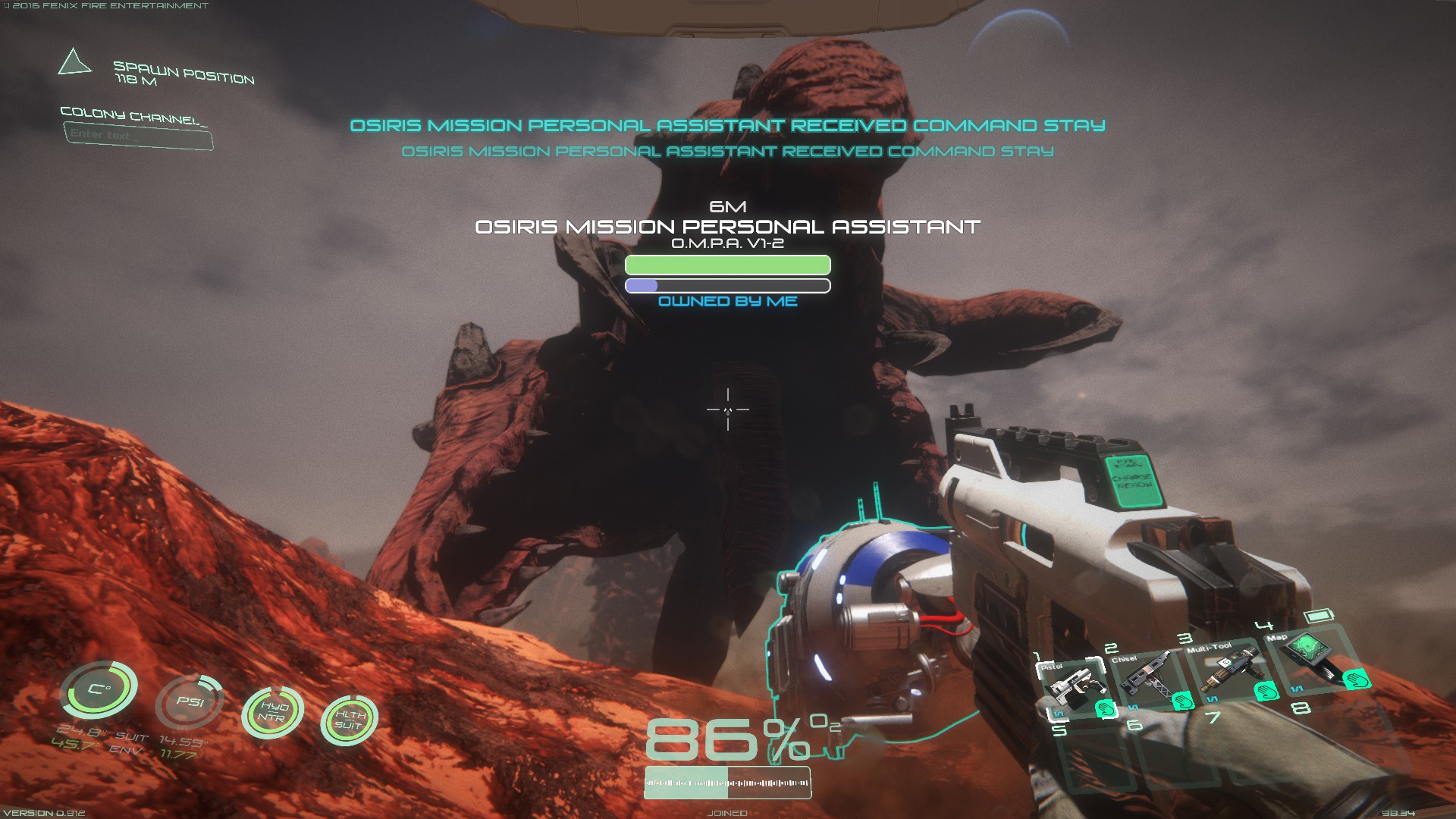 My droid friend zoomed up to cover me, the bastard looking beautiful as I realized our time together might be coming to an end in a few short seconds. With pistol in hand, I prepared myself to defend what little of the world I had come to know. As I took aim, the creature’s shadow loomed over me, and then… 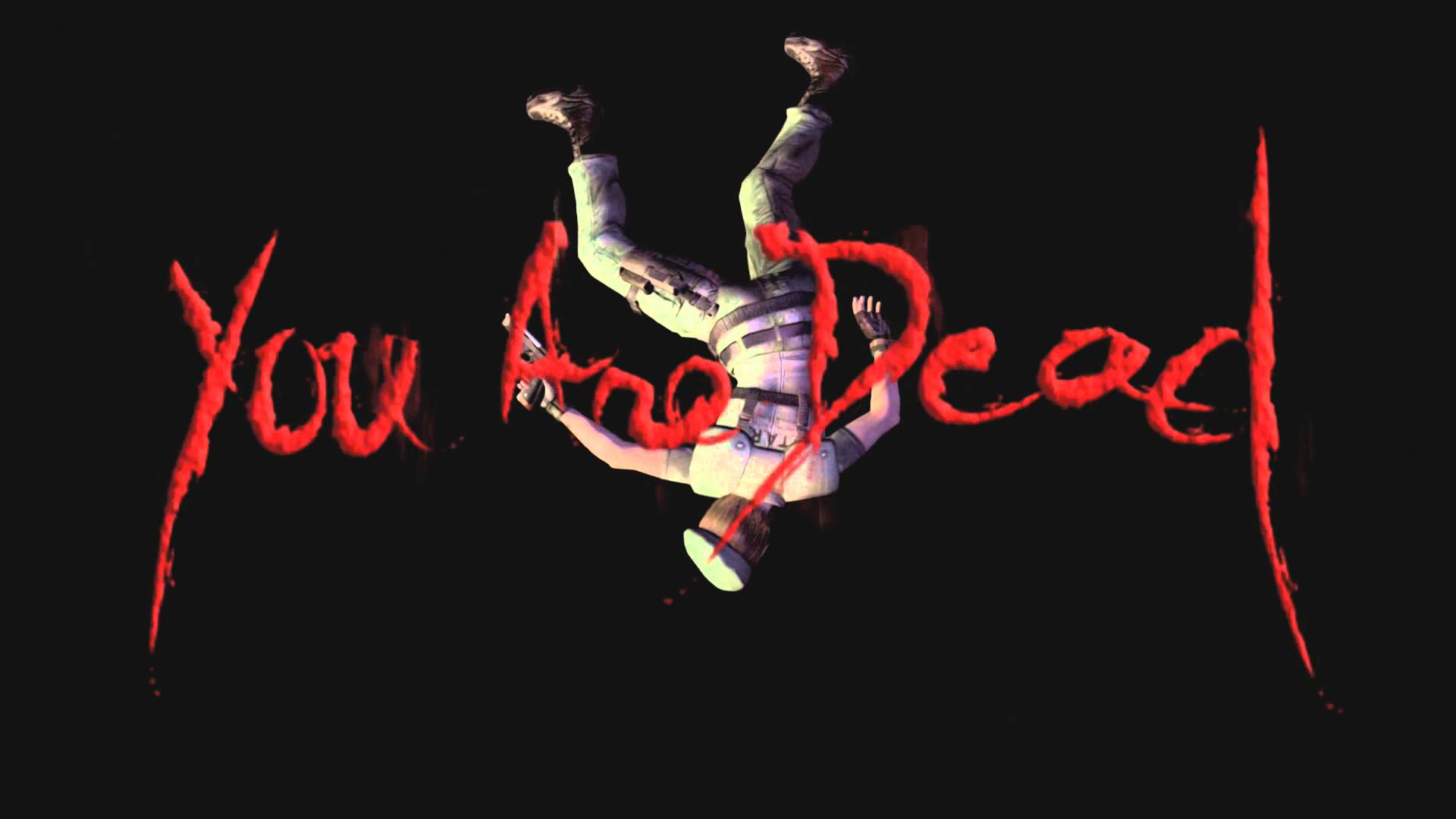 I forgot to take a screenshot, but yeah, the damn thing ate me without hesitating. My time with Osiris: New Dawn has been short so far, but if it allows me to tell more stories like this, I’m going to have one hell of a time with it.