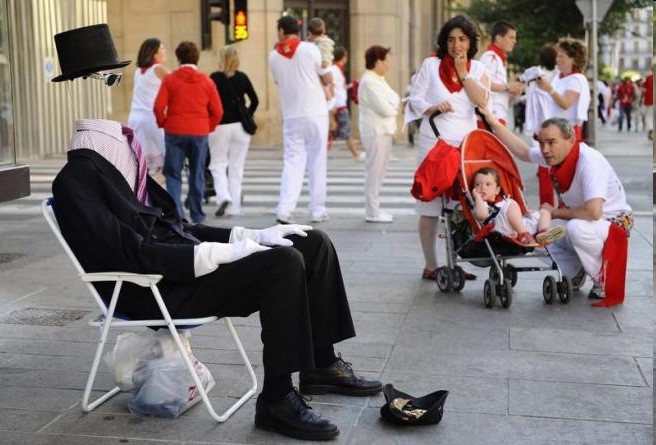 There are those whose skills allow them to dominate a battlefield with strategy. There are those who take command of others, and lead them to victory. Still others whose skills turn them into a roaming nightmare for their enemies, creating an environment of terror with every burst of gunfire. And more who can dominate opponents in personal combat without breaking a sweat.

I can do all of these things in a pinch. I can lead just as well as I can follow. I can formulate the plan and teach others to execute it flawlessly. I can turn a band of madmen into a functional, well-oiled machine of strategic destruction. I can rally comrades after a bitter, heartbreaking defeat. I can put lead on target, execute combos, solve puzzles, and I can even conjure enough dexterity to handle the occasional bit of well-timed jumping, but none of these things are areas which I truly excel.

What am I good at, you ask? I’m good at being impossible to find. Undetectable. Silent. I am the Invisible Man.

I am not what you might call “a natural”. My skills are entirely learned, and I have worked very hard over the years to maintain and evolve them. I did not arrive at my current ability to disappear into thin air by accident.

It all began with Metal Gear Solid. It was a painful learning curve for me, adjusting to not gunning down or beating up everything in sight. At first I did not like the change. I hungered for combat and violence; gathering ammo, and gunning down guards whenever the opportunity arose. I learned rather quickly that this was not the way to go about playing the game. Eventually, I had to learn to utilize stealth if I was ever going to make it through.

Some people learned to be invisible in Metal Gear Solid by memorizing patrol patterns and segments of the game. I had no FAQs to guide me, no purchased strategy guide, only my burning desire and tenacity to bring me through. I learned to become invisible by learning the guard behaviors and exploiting them. I do not have a map of the game burned into my brain with listings of when it is safe to move and when it is not. I just know what the AI will do in this situation or that situation. It is this process that I credit with my current status as a living shadow. This method, which I have been able to apply to many games from many different genres, has helped me to build an exponential volume of knowledge on my chosen craft.

My desire to become invisible transcends the traditional “stealth genre” that Metal Gear Solid can be credited with creating. I am good at stealth games, to be sure. I own nearly every game in the Metal Gear Solid series, each beaten far more than truly necessary. I have been a professional ninja in the Splinter Cell games. I’ve stolen more than my fair share of delightful goodies in the Thief games. However, I am not writing this to tell you that I am a master of stealth games; anyone can learn to do that if they’re determined enough. I am writing this because stealth has become my chosen approach in nearly any type of game, in any genre available. From Battlefield to Neverwinter, my goal is always the same: be the invisible man. I am not just good at doing this, I am exceptional at this.

When it comes to RPG games, if a stealthy approach of any kind is available, that’s where I make my home. In traditional western-style RPGs like Baldur’s Gate, Neverwinter Nights, or the more recent Dragon Age: Origins, my skills are quickly put to use as a stealth expert. More often than not, this takes the form of becoming an assassin or a spy of some sort. I skulk in the shadows and appear only after the battle has already been decided. I have the power to choose which of my enemies live and which die, and I exercise that power with absolutely terrifying impunity. Were my enemies living, breathing people, I might even pity them.

It was in the realm of RPGs that I learned patience and control. Perhaps more essential than any natural talent for subterfuge or camouflage, these two behavioral traits imprinted upon me one of the most important skills of a stealth expert: it is absolutely vital to stay your blade until the right moment. Being eager, being anxious, being excited and seeking the satisfaction of the kill, these are the hallmarks of a novice. A master is patient and precise, wasting no movement, wasting no time. Each second is carefully planned and predicted, from the acquisition to the stalk to the execution and beyond.

The Elder Scrolls III: Morrowind and The Elder Scrolls IV: Oblivion offered me the chance to combine my skills more directly with an RPG framework. Actually hiding, watching, waiting, and timing my strikes for devastating effects in order to advance was a fresh experience in RPG territory for me. It was just another chance to polish my skills and sharpen my senses, taking me even further down the path to becoming the Invisible Man.

First Person Shooters. The name pretty much explains it all; you play it in first person, and you are expected to shoot things. A genre that comes ready-made for adrenaline junkies and action fanatics. A war zone, full of the ripple of gunfire and the shattering crash of explosions is not a place that is typically conducive to invisibility. On the other hand, it has proven itself time and time again to be a place where my abilities can be absolutely essential to success.

The Battlefield series was the first to give me an opportunity to really put my stealth skills into practice against others. The maps were just large enough for one man to be able to go unnoticed, which allowed me to do what I was really good at: completely disappear.

I liked the anonymity of a large map and a large group of people. It allowed me to be just another face in the crowd, and that was good. Every other member of my team was just a tool for me to use: something big and angry that took attention off of the single infantryman circling around behind enemy lines to set traps, sabotage equipment, execute commanders, and flank heavy weapons or tanks. I was already good at being stealthy, but Battlefield 2 made me better in every way possible.

It was through Battlefield 2 that I was able to learn and interpret intangible things like momentum, intention, and capability. The intuitive learning structure I had formed from Metal Gear Solid took hold and I began to accumulate and interpret an incredible amount of information in very short periods of time. Months of learning the maps, the different styles of playing them, and the general structure of the multiplayer community that the game had created paid off in unexpected ways for my stealthy approach to the game. Thanks to my experience from other games up to that point, I was able to apply the same kind of generalized approach I’d used to start my journey to becoming the Invisible Man, to intuitively map the battlefield in my mind as a living, breathing entity.

I could interpret things like troop positioning, movements, likely spawn locations of individual soldiers, when I could expect support or enemy counterattack, and more! I could read the battlefield like a book based on how far into the map cycle we were, how long we’d been on the map, how many people were on the map, what flags each team was holding and the methods of attack they were using. Even now I can list off approaches I would use based on different scenarios in each map.

I used all of that information to lead small teams into vital areas and really hit the enemy where it hurts. Cutting off the next set of reinforcements by capping ahead of the advancing army at a vital position. Sabotaging equipment and vehicles at their locations. Killing high value targets like engineers, squad leaders, snipers, front line medics and commanders. I didn’t get many kills, but every enemy I put down was more important to the greater conflict than any dime-a-dozen front line soldier. Battlefield 2 took my affinity for stealth and turned it into a tangible weapon, while simultaneously teaching me to interpret my enemy on a psychological level based on observable signs. When I was the most hated man on the battlefield, when whole squads were pulled off the front lines to hunt me down, when every member of the enemy team was busy scanning the environment for my last known location, when every last one of them wanted to put a bullet in my head or a knife in my stomach, and they still couldn’t find me, that is when I became the Invisible Man.

I still put my skills to good use in every game I play. You would think that I’m the kind of guy who defaults to the stealth classes in multiplayer games, but that’s not true at all. I can take almost anything and make it seem invisible. I’m the stealthiest damn Demoman you’ll never see in Team Fortress 2, and I continued my stealth career into Battlefield 2142 with the Assault kit rather than Spec Ops. Stealth has a whole lot more to do with patience and reading the situation at hand than having the ability to disguise yourself and walk among the enemy or cloak and make yourself tougher to pick out in the midst of battle.

When you learn to interpret the world around you accurately and instinctively, when you can take that knowledge and turn it into a practical method to evade detection, when you can use that method to strike your enemies with merciless accuracy and efficiency, and when you can learn to master your own impulses to kill, replacing them with patience and unleashing them only on targets of the highest priority, only then can you become truly invisible.

I am undetectable. Wherever you search, I am not there. I am a master of interpretation. If I take you out, it is because you have told me when and where you would be. I am patient. If you pass by me and live, it is only because I have allowed it. I am not apprehensive. I am not seeking the high score. I am not driven or compelled to rush headlong into battle. I consider honor to be a bad joke. I never fight fair.

Ladies and gentlemen of Destructoid, this is my area of expertise. I am The Invisible Man.