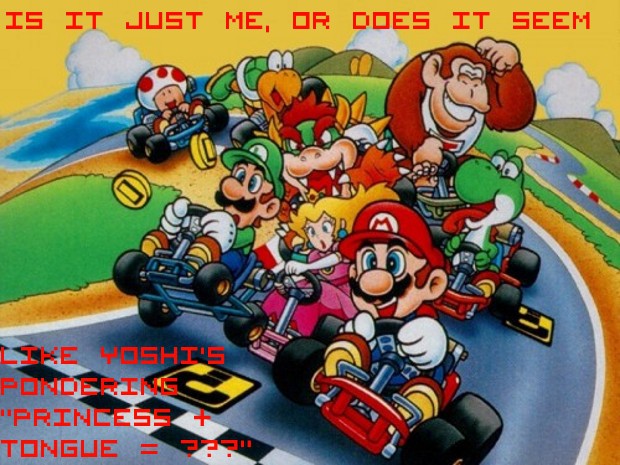 Gran Turismo. Forza. Names that inspire warm fuzzies in car enthusiasts across the gaming spectrum, with their wide varieties of real-world automobiles and courses, and layer upon layer of customization and tweaking possibilities.

It’s a shame I don’t have time for all that fussing around. Let me see your blue sparks instead!

As far back as RC Pro-Am on the NES, I’ve been particularly fond of non-standard racing fare. Even games like Pole Position, OutRun, and Rad Racer turned me off, for being even remotely connected to racing in reality. My dad’s van couldn’t pick up powerups. No missiles were going to be fired out of my mother’s k-car. It just wasn’t interesting without crazy maneuvers and way too much going on. Granted, it helped that the NES was also giving me the serious-business remote control car my parents would never have been able to afford.

Super Mario Kart really brought things to a head, however. Goofy weapons and creative courses merged with characters I already knew and loved? Check, please. I played Super Mario Kart as much as, if not more than, Super Mario World over Christmas break after receiving a much-coveted SNES, fighting hard to unlock and blow my way through the Star Cup. By the end of that week off from school, I’d gotten to the point where I was making up lyrics for the victory music of my two mains, Luigi and Koopa Troopa. “I told you so! Doot-doo, doot-doo-doo.”

Unfortunately, my new-found love was wasted on a fairly sparse field of suitors for quite some time. Sure, there was the MS-DOS game Wacky Wheels, but driving with a keyboard grew old fairly quickly, and I could only play it at two friends’ houses, as I had no computer at home. That poor SNES cart saw a great deal of use, and my controllers their fair share of damage from the occasional rage, typically from missing that half-lap-skipping jump at the beginning of Rainbow Road. All this practice served me well when the short-lived X-Band online play service surfaced, however; I couldn’t hold my own in Street Fighter II or Mortal Kombat, but I can still make you my bitch on any of the battle courses, especially 3 and 4.

It got to the point that I actually spent some time with the first Gran Turismo when it came out, if only to take the crappiest cars available and trick them out to a ridiculous level. Thankfully, the PlayStation also opened the door for mascot racers, bringing us Chocobo Racing, Crash Team Racing, and many other less notables. My hours staring at a turtle’s ass came in handy, with skills translating easily to this new-found, gimmicky racer fad.

One of my favorite memories is, somehow, both Smurf Racer and Super Bombad Racing being featured as “mystery” games in an informal tournament I’d entered. I managed to place in both despite going in blind and both games being, admittedly, super terrible. I should admit that years later, during a brief stint working at GameStop, I actually purchased a used copy of Smurf Racer that I still own and play to this day.

Naturally, I spent plenty of time with Mario Kart 64 and Diddy Kong Racing, the latter renewing my hunger for something more. As if by serendipity, I happened across the video for Fluke’s “Atom Bomb,” which led me to a whole new realm and skillset by introducing me to the WipeOut series.

I was entranced by WipeOut, particularly by how minute differences in handling and maneuver timing could spell victory or disaster, and at the sheer creativity of the courses on the whole. I plunged headfirst into WipeOut and WipeOut XL, and my reaction time and control savvy came out that much the better for it. WipeOut also did wonders for my trigger finger, teaching me to strategize my item use and discards for optimal benefits.

The days following progressed mostly through WipeOut 3 and WipeOut Fusion, until the eventual release of Mario Kart: Double Dash. A marathon session lasting nearly forty-eight hours and involving two controller hand-offs resulted in a full unlock of all the characters, vehicles, and tracks. I’d come a long way, baby, and was ready to wreck all sorts of face amongst my friends.

And so, here we are today. While several games distracted me from Mario Kart Wii, I had half the game cleared in the first two days of ownership, a great deal of it using the wheel that was packaged with the game rather than pussing out and grabbing a GameCube controller. Snaking came easily enough in Mario Kart DS, and I was a reasonable contender and even took out at least one Nintendo employee online, in the game’s early days. The two WipeOut titles on the PSP stand amongst the three games I still actually own for the system, and my first priority upon getting a PS3 is going to be shelling out for WipeOut HD. I made a bit of a mess in Fatal Inertia, despite the relative lameness of the game, and can hold my own in the dreck that is Sonic Riders.

Just yesterday, I downloaded the Sonic & Sega All-Stars Racing demo on my 360, and the shortcuts on the single playable course stood out like a sore thumb. Took me a minute to realize the drift mechanic was similar to Mario Kart’s sparks, but once I hit that, I recovered from Banjo & Kazooie destroying me with gold jiggies to a podium slot fairly easily. It’s definitely a BUY title in my book, even if the racing isn’t particularly innovative, and rest assured that if you encounter me online, I already plan to wreck your rectum.

Kart racers and other non-standard racing games are my house, and rest assured, I like to keep that house in order. Throw me behind the wheel of a virtual Bugatti, and I’ll be off the track (or bumping into you in an attempt to stay on) in seconds flat. Hand me some shells, mushrooms, or a Bullet Bill, however, and your poopflower has my name on it.