“The gamer feels in control of a malleable universe full of surprises, but succeeding at the game actually involves discovering the rules of the program. Once these are learnt, the game’s interest typically fades.” (Bella Dicks, “Culture on Display: The Production of Contemporary Visitability,” (2003), 179)

In this article, I intend to look at Star Fox 64, a game in which I feel like I’ve gotten the closest to becoming a “master” at. It’s a tale that involves rivalry, memorization, and almost extreme obsession. The quote up there will hopefully become relevant by the end of the article, though I would disagree with the second sentence: Expertise at a game only comes from fully understanding the game’s design, and games that keep you enthralled after this point are truly the best. Anyway, to begin …

I had never really cared about high scores, and, actually, I still don’t care now (with Bayonetta being the only exception, where I got obsessed with “perfect” high-combo, never-hit-once runs). I didn’t really have much experience playing Shmups either (which are similar in terms of being focused on memorization, patterns and high scores), nor had I ever tried to “master” a game. Star Fox 64 was different in one crucial way: I had a rival.

My schoolmate Chris was actually the one who owned the game, and I tried to play single-player at his house whenever I had the chance. Luckily, I would often wake up early in the morning after a birthday party or sleepover, so I would get to play through the entire game, although it was with the sound muted. A few years after the game came out, I convinced him to let me borrow it for a while. That was when I became obsessed with the game, playing several runs in a day, continually perfecting my skills and memorizing enemy patterns. I first aimed to beat his high score, which took me several weeks. However, I made the mistake of putting the initials “HAH” for my high score instead of my initials, so a few weeks after I returned the game to him, he claimed that he was the one that got that score! Filled with rage, I borrowed the game again, and became even more of an expert at it. I made sure to take the top score back (and immediately informed him that I did so, and what initials I used), and proceeded to wipe out all of his remaining scores from the top 10, which effectively removed any traces that he had ever played. I didn’t stop there, though. I was truly obsessed. I would continue to play at least one run per day (at least, when I didn’t have another new game to play), on a neverending quest for higher scores. I even fell into a annoying tendency to restart a run if my score in the first few levels didn’t meet my expectations, causing it to take several hours to actually finish an “acceptable” run. In the end, my best score was an impressive 1760. I made sure to call Chris to confirm it. Thankfully, he had never been able to top it.

The key to my success in the game was memorization, plain and simple. Like any classic Shmup, the enemies in Star Fox 64 always appeared at specific times, and followed specific patterns. Sometimes knowing when/where enemies would appear was crucial, so you could quickly take them out on the edge of screen. Just as important was knowing how to trigger certain enemies to appear. Often, you had to fly/drive through a specific area of the screen (like the arches on Corneria), which would cause a group of otherwise hidden enemies to pop up.

The most important part of the memorization, however, was knowing when to take down as many enemies at once for a high bonus. The game had a bonus system for taking down multiple enemies with a single charged blast (the little “HIT +x” that pops up). This was essential for racking up a high score. Timing and precise aiming were key: for example, two pairs of enemy fighters show up, then fly in a random pattern before moving close together for a few seconds; firing a charged blast at that exact time would take down all four at once and get a “HIT +4” bonus. There was an even a relatively hidden trick that gave even more points: if you fired a charged shot without locking on, it would give an extra point bonus. This would even work for single enemies, giving a “HIT +1”. Often you would have to aim off target (hitting the ground, or a wall) to take out the most enemies at once. So, you pretty much had to use the freefire charged shot all the time, requiring memorization of the precise time when the shot was charged but before it could lock on.

I suppose these concepts are hard to explain in text, so here’s a video of a high-score run through the first level, Corneria. Note how the player goes through out-of-the-way gaps and arches to trigger extra enemy formations, and the effective use of the freefire charged shot.


Note: This run might be tool-assisted on an emulator. Nevertheless, the principles of memorization and timing are still present. Just don’t assume that this can be done on a regular N64.

However, my focus on high-score runs did have negative implications. First of all, it was, like all video game obsessions, a major drain on my time. Each run would take almost 2 hours (if I recall correctly), and there was always the temptation to do “just one more” whenever I got close to beating my personal best. Once I had beaten Chris, the only goal I had was to continually improve my own score. At that time, I didn’t have regular Internet access to check other peoples’ high scores (which, as I would see later, had a great deal of fake/hacked/time-assisted scores anyway). Therefore, there was no fixed target to aim at; instead, all I was focused on was to go “higher”, which was a vague and neverending goal. 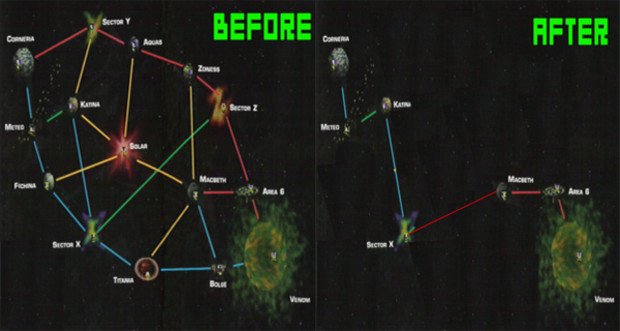 As well, there is pretty much only one “ideal” route through the game that allows for the maximum amount of points. So, naturally, that’s the one I would play, every single time. By doing this, though, I condensed the variable “narrative” of the game (i.e., how the player creates their own stories by the selection of different levels and the actions they take within them) to a completely linear one. There was only one route through the game that I played; any others were “less profitable”, to use a term that makes my gameplay seem even more cold and heartless. Any choices I made in the game were directly related to the score counter, and not to any personal interest in the fates of the characters or to satisfy my curiosity in exploring different levels. For example, in Katina, there is a giant, Independence Day-type mothership about to destroy a friendly base. Destroying the mothership in time would allow you to go to a different level (Solar) than if you failed (Sector X). However, Sector X was on my ideal path, so I would go there regardless of whether or not the mothership was destroyed. Still, I would always destroy the mothership, but only because the point bonus it provided made it useful “investment”. Thankfully, games during this period weren’t nearly as focused on developing a connection between the player and the story as they are now, so my narrowminded pursuit of a high score at the expense of narrative and exploration doesn’t feel as much like I was “ruining” the game.

Despite the intense challenge of going after a high score, it was also quite fun. Unlike most other Shmups, getting hit a few times didn’t ruin your run. Actually, sometimes getting hit was part of the strategy, such as flying through an obstacle rather than trying to avoid it. I would never tire of the satisfaction of seeing that little “HIT+” pop up, especially when it got to the point where my timing was so perfect that I was hitting enemies before they became visible on the screen.

Of course, no discussion on high scores in Star Fox 64 can go by without mentioning the joy that is Area 6, the second last level of the game. You see, the max score in each level would usually top out somewhere between 200-300 points. In Area 6, however, you could get upwards of 500-600! The level was an intense offensive through the enemy’s main defense perimeter, and they were throwing everything at you. The nice part was that you could destroy pretty much everything in the level: fighters, battleships, space stations, you name it. If a normal level had waves of 4 enemy fighters, this one had groups of 10! Memorization and timing became ever more crucial, and getting a very high score on this level usually made the difference between beating my personal best and not even making it in the top 10.

Again, seeing the level in action stands for itself:


Note: This run is even more likely to be tool assisted. However, his attack pattern is pretty much identical to how I would approach my own runs.

Looking at high scores for the game on the Internet, I now realize that my own high score of 1760 is nowhere close to being the highest, even if all the tool-assisted/hacked scores are removed. And I’m sure some of you have gotten higher scores than me as well. However, I still believe that Star Fox 64 is the closest I’ve ever gotten to gaming “perfection”. There’s been no other game where I felt like I knew everything, nor one that became so connected with a personal rivalry and an obsession with continually improving my score. If I can ascribe any grandiose conclusion to this (far too long) essay, it’s that being an “expert” at a game isn’t really about being better than everyone else (or even just everyone you know), even the actual score doesn’t matter. Instead, going back to my introductory quote, expertise is all about understanding comprehensively how the game works. Tricks, patterns, glitches, timing, and, most importantly, memorization, are all critical to becoming a master at a game. Treat the game not just as a dispassionate form of media, but as an opponent, who must be analyzed, strategized against, and eventually overcome.