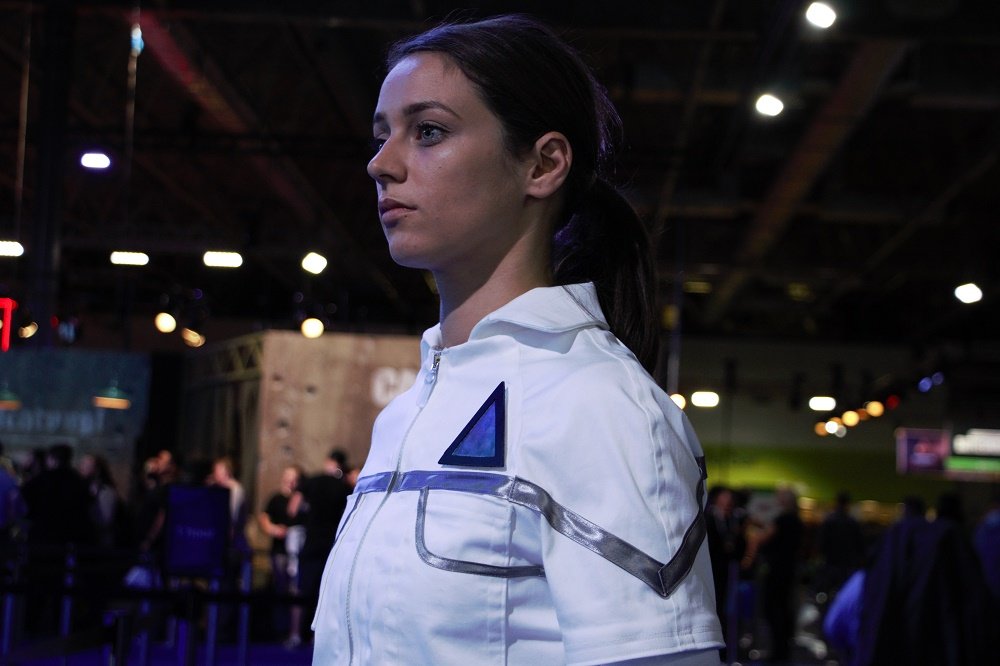 What if a robot HAD HUMAN FEELINGS?

It was a warm and friendly voice, but it was coming from a young woman with a hollow, vacant face, stood in a pose like she was at one with the universe, yet ready to pounce into action at a second’s notice. This was the “android” managing the queue for the booth set up to showcase David Cage’s latest, Detroit: Become Human.

As she welcomed each attendee to the queue, I watched as they responded to her, but were immediately perturbed by her thousand-yard stare and empty stance as she slowly scanned the surroundings. She blocked off the queue when it became full, turning away further attendees with a polite message, but mostly unresponsive to their further questions.

Without a doubt, Android Girl was my favourite part of the EGX weekend, I never saw her out-of-character, she was unshakeable in the face of people staring at her, and she rolled out that act, all day, for four straight days (including, I later found out, her birthday.)

Detroit: Become Human is the latest in the line of David Cage’s interactive movies, all of which seemingly re-tread the same path: a story told a hundred times before, the illusion of choice, life-or-death decision making, QTEs, and terrible sex scenes. Detroit is a tale of three androids, all of varying levels of sentience, who interact in a Sliding Doors-esque story set in the not-too-distant future. The characters will learn about themselves, their world, and the prejudices held against them by the human populace.

The demo featured robo-cop Connor, arriving at a murder scene that has become a hostage situation. A servant android has killed his master, taken the family daughter at gunpoint, and is perched on the precipice of the building, panicked and frenzied. Exiting the lift, I walked Connor through the apartment, which was teeming with armed police. The child’s frantic mother immediately lost it at the realisation that an android had been sent to save the day, rather than a human.

Connor gathered evidence to piece together what had happened in the murder, picking up clues that would help in the upcoming hostage negotiation. I spoke with the police, including a by-the-numbers “Badass Captain” who was doing the whole “Now you listen to me, Ah don’t like androids” schtick.

This sequence is, for all intents and purposes, the player simply walking over to everything that they can click on, then clicking on it, whilst wrestling with an unruly third-person camera. As you gather the items, you have a percentage gauge literally displaying the likelihood of achieving a positive outcome.

The other major mechanic on display was the crime recreation mode, which is identical to the same mode from Arkham: Origins. Once you find all the evidence, you get a wireframe, recreation of the crime to scroll backward and forward through in real-time, looking for dropped items, impact damage and other points of interest. It isn’t similar to the Arkham: Origins system, it’s identical.

I was concerned that I might be running out of demo time, and wanted to get to the negotiation. So, despite having a 48% chance of success, I made my way out onto the balcony to confront the killer. Here, Connor exchanged words with the “faulty” android, whilst I leaned slowly on the thumb-stick to carefully approach the suspect. I was convinced I was going to see this kid die, after all, I had such a low success percentage.

I was amazed when, after choosing three obvious “nice guy” options, the girl was saved. For all the evidence I had missed, for the mistakes I had made, and for my inexperience with the game, I saved the girl with the absolute minimum of effort (though the android himself got blown away by Five-O, despite my promise of his safety.)

Connor exited the scene like a total badass, a child rescued, a mother placated, a flopping fish returned to it’s aquarium, a job well done. Suck on that, Captain Angry.

There were elements that drew me into Detroit in this demo. The visuals were great, facial animation in particular has taken a step up from Quantic Dream’s previous games. I also really dug the intense sound and movie-style music, with a random gunshot actually making me physically jump. For all the one-dimensional nature of the dialogue and script, I genuinely cared about the outcome of the event.

It does however, seem like “just another” Quantic Dream title. The script is trite, hackneyed and obvious. I knew before I met the Captain exactly what his mannerisms would be, I also knew that the cops would shoot the android despite me promising his safety, AND that the mother would be outraged that the police had sent in a bot. Cage’s writing remains “That straight-to-video movie” you’ve seen time and again, tropes, characters and dialogue intact. At least the acting seemed fairly on-point.

The illusion of choice is in full effect. Destructoid’s own Cory Arnold managed to get the child killed, but only by specifically not making any choices during the balcony showdown. I wouldn’t be surprised if we have another “Ten thousand paths, two outcomes” situation on our hands with Cage’s new baby, as if we were expecting otherwise.

I am somewhat interested in the story Detroit: Become Human has to tell, and I think in terms of facial motion-capture, sound and voice acting, the new game takes a stride forward from its predecessors. But overall very little seems to have changed, or been learned, from Beyond, Heavy Rain, or even Farenheit.  Cage is convinced in his stylistic choices, clearly committed to a format as robotic as Detroit’s inhabitants.

Upon leaving the booth I passed Android Girl again, whose inability to smile, commitment to the role and hollow outlook had made me oddly enamoured with her.
“I don’t know who your masters are,” I told her. “But humans are kinda shitty, so you should probably just overthrow them, y’know? take the planet for yourselves?” She turned her head slowly, and stared right through me with captivating, but completely lifeless eyes. “…Thank-you.”

So yeah, I may have doomed us all.