Last month, my family and I were at our local mall doing some holiday shopping. As we were walking through the mall, we noticed a large gathering of people who were playing video games. Upon closer inspection, it turns out that our mall (Woodfield Mall, Schaumburg, IL) was host to one of the many Nintendo Mall Tours that were going on around the nation.

Well, being the Nintendo fanboy that I am, I absolutely had to stop by to see if there were any free goodies that I could get my hands on. The space was set up rather nicely. There were several Wii Us and 3DSes on display, all readily available and all showcasing different Nintendo properties. Hyrule Warriors, Captain Toad, Pokémon, and a variety of other games were on the “smaller” televisions, while Super Smash Bros. for the Wii U and Mario Kart 8 were set up as more “event” style displays. 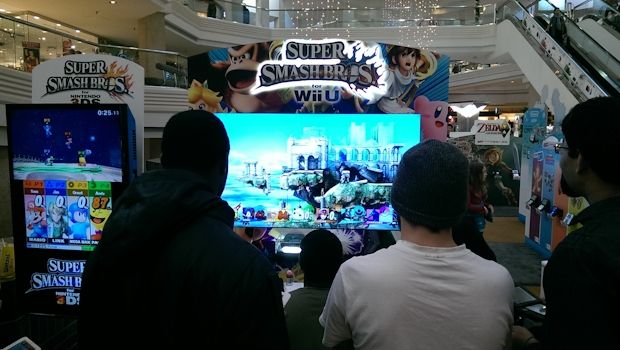 My daughter immediately went to the Smash Bros. display, since she is absolutely hooked on Smash for the 3DS and the Wii U. The number of people playing was pretty high; there was an eight person match going on, set up in an elimination style tournament. Unfortunately, with the number of people waiting to play, we had to look elsewhere for some Nintendo fun. On the other side of the Smash display, Nintendo had set up a large television (70” display) for Mario Kart 8.  The whole setup was really well done, with the television surrounded by Mario Kart promotional ads and whatnot.

As my daughter was settling in to play some Mario Kart, one of the individuals who was waiting to play Smash decided to come over and play with her, since the wait to play Smash at this point was close to 30 minutes. My daughter and her opponent (a guy in his low to mid-20s) grabbed their controllers (my daughter was using the gamepad and the guy was using the Wii U Pro controller). Before long, the races were on; my daughter was playing as Peach and the guy chose Donkey Kong. They were racing their way through the four tracks in the Mushroom Cup. 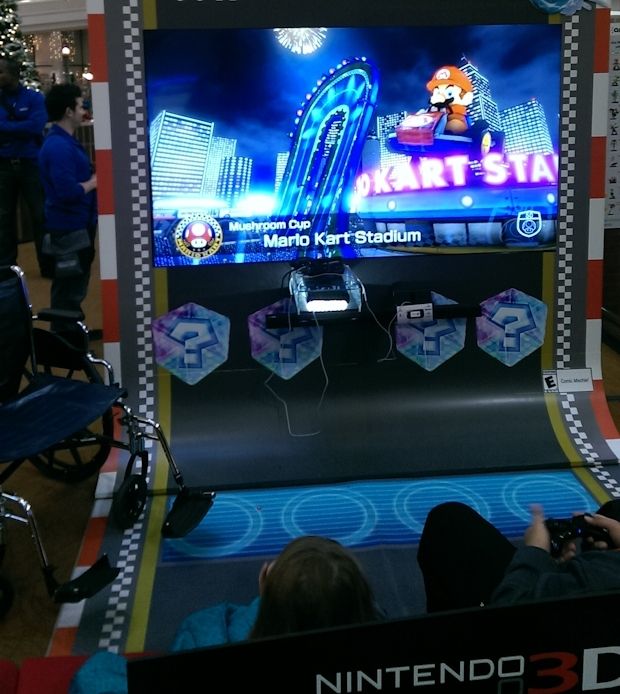 The first race wasn’t even close. My daughter had finished with an almost full-lap lead over her opponent. The Nintendo rep made a sly comment to the guy, almost mocking him for “losing to a kid.” The second race started and you could tell the game was on. My daughter maintained her lead throughout. The guy was definitely in it to win as his posture changed and he was “feeling it” (if you’ve ever played, you know what I mean).

With a win in the first and second race, my daughter was commanding a very healthy lead. When the third race started, the Nintendo rep was doing his best to ensure that this stayed a heated competition (he was basically making fun of the guy the whole time in a playful and innocent manner). The third race was much closer, with my daughter barely pulling off the win; things were definitely starting to get salty at this point, as it was apparent that this guy was about to have his ass handed to him by a ten-year old.

With the fourth and final race (Thwomp Ruins), I was confident that my daughter would sweep the competition (both AI and human), and take home the gold. The entire race was close, my daughter was in second place during the second lap. Halfway through the second lap, she had managed to get a question mark block, which led to a red shell. Not wanting to waste the shell, she held onto it by placing it behind her kart (she is notorious for doing this in our house so that she can’t be hit from behind). In the third lap, she re-took the lead, still holding on to her red shell. 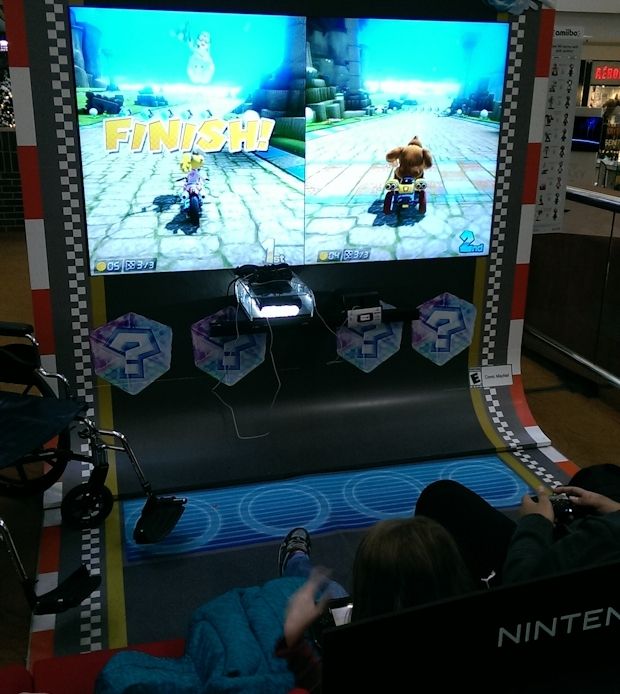 After crossing the finish line, triggering the last lap, the guy sitting next to her sat up, and leaned forward; he was in a very close second and he definitely did not want to go 0-4 against a kid. The last lap was intense. My daughter maintained the lead but it wasn’t easy, she definitely had to work for it. As they were both closing in on the finish line, my daughter did something that was so unexpected, that it caused myself and the Nintendo rep to explode with excitement.

Here’s what happened — picture this if you can. Peach is in first, and Donkey Kong is in such a close second place that if anything slowed my daughter down he would take the lead. The finish line was literally in sight; my daughter still had her red shell attached to the back of her kart. Literally seconds before my daughter hit the finish line, she let loose the red shell, hitting Donkey Kong as she crossed the finish line to win. My daughter had trolled this guy the entire race only to humiliate him at the very last second.

It was beautiful. The Nintendo rep exploded with laughter. I let out a loud yell of my own. The guy playing against my daughter just sat there, staring at the screen, listening to us laugh and cheer. He was defeated. Not just defeated, but defeated and humiliated by a child. 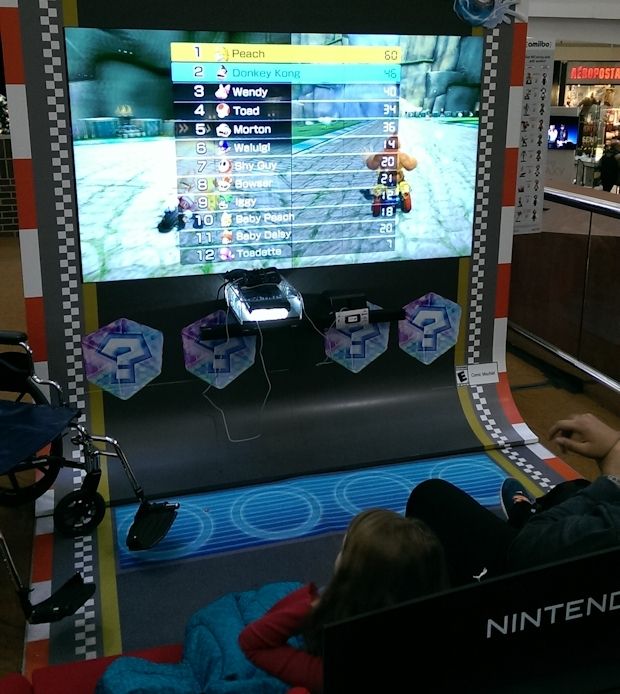 Thankfully he was a great sport and congratulated her after the race; he even broke into a laugh of his own and commented on how throwing that red shell at the last minute was “just evil.” We left the Nintendo event shortly after that. There was no one else to play my daughter at Mario Kart and the line for Smash was still entirely too long. It was a proud moment for me, watching my daughter dominate a game against an honest to God real opponent instead of just AI.

The moral of this story is: if you ever find yourself at some event, and you see Mario Kart with an open seat, don’t underestimate the kids who may be sitting next to you. You just may end up on the wrong side of red shell.