The Xbox presence at EGX this weekend was surprisingly small. Whilst Nintendo and PlayStation had full hall-quarter setups and stage areas, and even individual games like Destiny having huge devoted floorspace. Xbox had a somewhat modest area, with their centrepiece being a beautiful Porsche 911, brought in to promote Project CARS 2.

Of the Xbox titles on display, the only ones I wanted to check out were Cuphead and Huntdown, both of which were relegated to just two setups, hidden behind the four hour queue for Shadow of War. At least this meant you could sit at these games undisturbed, but it was shocking to see what minor presence Team Green brought to the trade show. 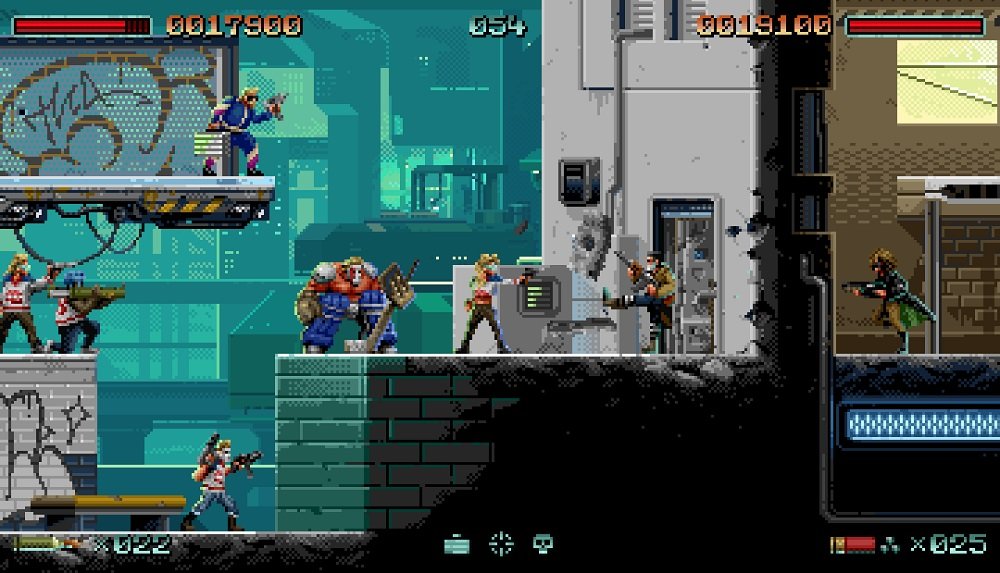 Huntdown, by cosy outfit Easy Trigger games, is a retro-styled platform shooter. A really simple go-to is to suggest that it’s reminiscent of RoboCop vs Terminator for the Sega Mega Drive, or Judge Dredd on the SNES. The neon-soaked cyberpunk adventure sees one or two relentless bounty hunters attempt to clean the mean streets of vicious, but colourfully-themed gangs, similar to those in the excellent 1979 movie, The Warriors.

Though trailers make the game seem like a “Hold right and keep firing” no-brainer, Huntdown is actually surprisingly tactical and pretty brutal. Your sidearm has lame stopping power, and the constant stream of weaponry dropped in your wake has very limited ammo. You can also only carry one gun (and your sidearm) at a time, thus clever conservation of ammo and weapon management is a must in order to progress through the game’s stages, each teaming with a variety of enemies armed with guns, melee weapons, and explosives.

Cover is also important, as is timing the right moment to stick your head out, lest it get blown clean off of your shoulders. Most enemies can take a fair bit of damage before dying, so running towards them whilst mindlessly firing is likely to see your guy or gal go down in a blaze of glory pretty fast. The enemy can also use cover, which you can choose to flank, or bombard with a well placed grenade. In keeping with the 90’s game aesthetic, the punks seem to have no issue taking cover next to explosive barrels. Some guys never learn. 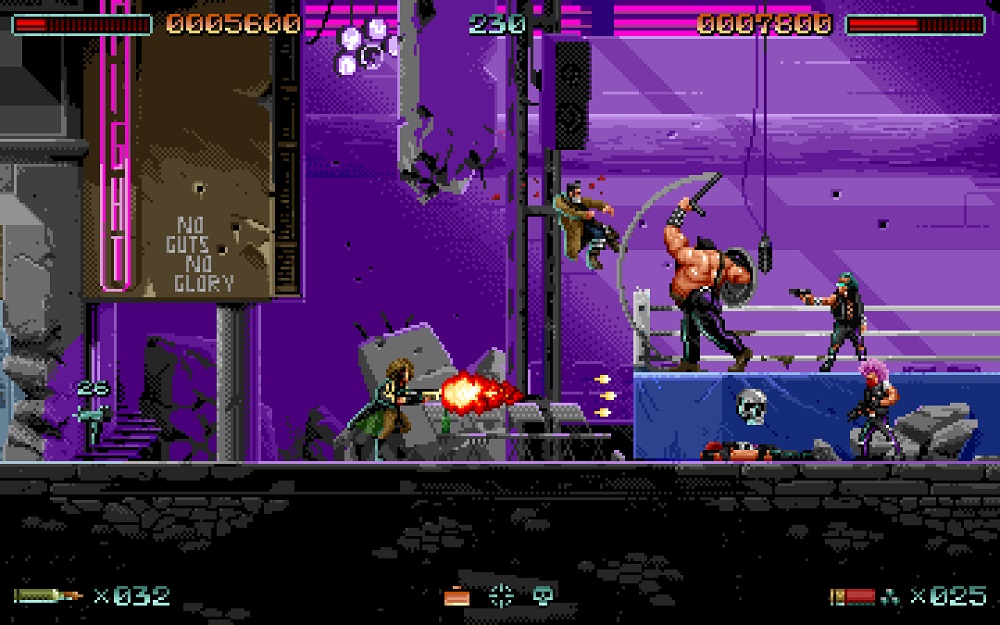 As you progress through the slick, sleazy, but garishly colourful levels, you also come across some hefty boss characters, carrying equally heavy bounties. These are some tough customers, requiring patience, sharp-shooting and good timing to eliminate. You only have one life, and although there are plenty of health packs along the way, being caught out in the open against a gun-toting thug will send you to the graveyard in no time at all.

In keeping with the neon-retro visuals, there’s also a gritty electronica soundtrack which pulsates behind the action, keeping the 16-bit vibe alive. The great character animation was hand-drawn, pixel by pixel, and reminds me of the awesome Elevator Action Returns.

I enjoyed my time with Huntdown, it took me by surprise with its difficulty, as I was expecting to just mow my way through everyone, no worries, but it requires more skill and restraint than I had predicted. (Though I saw a co-op two-player game in action, which did make the game seem a whole lot easier.) Either way, for those who fancy a great, old-school blast of arcade action. Huntdown is definitely a game to keep on your radar.

Huntdown launches for PC, PS4, Xbox One and Nintendo Switch in 2018.