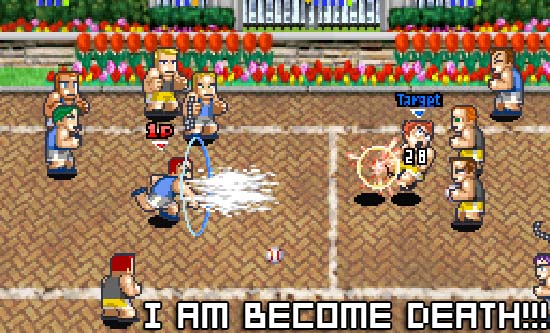 I swear to God I won’t let this degenerate into a nostalgia-fest, but c’mon — Super Dodge Ball was awesome. It taught me two lessons that I reflect upon almost daily in my adult life: first, always run and leap before hurling anything; second, Russian dodgeball players will murder you if you dare so much as blink in the field of battle. It was also my first introduction to Kunio-Kun, Technos’ long-running series of titles in which combat, sports, and combat sports took center stage.

An update to the dodgeball end of things comes in the form of Super Dodgeball Brawlers for the DS, set to drop in the US by way of Aksys Games in the Spring of next year. The press release issued by Aksys promises custom characters, team attacks, and finally: the option to drop the ball and beat the undying snot out of your opponents with fists and weapons. Y’know, in case the ball thang ain’t doing it for you.

Hit the jump for the release and check the gallery for some screenshots of the upcoming title.

“Super Dodgeball Brawlers maintains the great pick up and play feel of the classic Dodgeball series while adding in over 100 new super throws, as well as melee combat–a first for the series,” said Akibo Shieh, President, Aksys Games. “Fans of the original will be pleased that the fantastic versus mode of the original game has returned along with an all new 8 player ‘Brawl’ mode. If you’re a fan of the old-school Super Dodgeball, you have a lot to look forward to in Brawlers.”

• Over 100 ball-busting special attacks! Dish out a variety of pain with over 100 special attacks with their own special animations and effects, like the Cactus Attack, Panda Shot and Spear.
• Finally, an open season for violence! There are some new rules on the playground this time around. If the old-fashioned way doesn’t work for you, you can now use punches, kicks, and even weapons against the opposing team.
• Introducing the Super Gauge System! Activate a “Team Upgrade Attack” with the Touch Screen when your Super Gauge reaches its maximum level. Boost a team member’s status or unleash an “Instant Kill” special attack to turn the tide of battle.
• Create-a-character mode! Create and customize your own dodgeball dream team.
• The perfect game for multiplayer mayhem! Compete in a traditional game of dodgeball against a friend or take part in a multiplayer street brawl with up to 8 players.
Super Dodgeball Brawlers has not yet been rated by the ESRB and has an MSRP of $29.99.