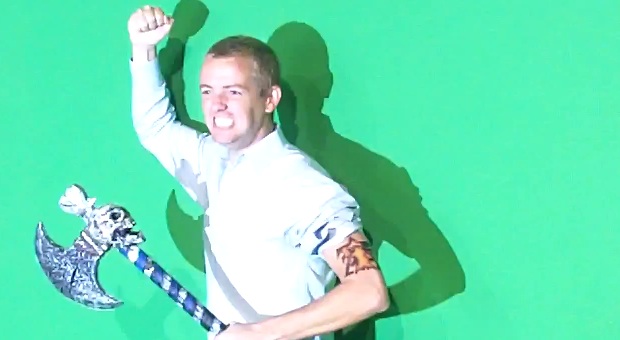 I only had a few hours to spend at BlizzCon 2011 this past weekend, and I wanted to do as much fun stuff as possible in that very limited amount of time. I had already played StarCraft II and Diablo III (and don’t regularly play World of WarCraft), so I decided to partake in all the other stuff there was to do at the awesome fan convention.

What else is there to do besides play games, you ask? Surprisingly, a lot! In the above video — shot and edited by the talented Taylor Boatright — I record some voices for a cutscene in WoW, get a (temporary) tattoo, play some retro games, and take part in a green screen-tastic photo shoot.

To say this is all humiliating would be an understatement. I hate watching myself on video (seriously, I look and sound like that?!), but BlizzCon was really fun and I am nothing if not a guy willing to embarrass himself. So … enjoy?!

Oh, and as a bonus, you can view the final photo shoot pictures in the gallery. I look pretty goddamn manly on that chicken, right?