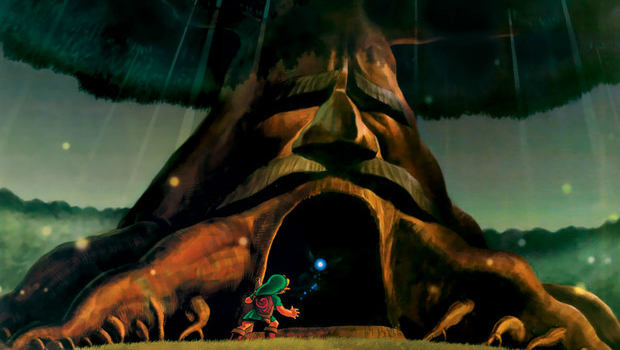 [Dtoid community blogger kingsharkboi remembers one of the greatest games of all time (and shares some wonderful tribute music in the process). Want to see your own blog appear on our front page? Go write something! –Mr Andy Dixon]

This week marks at least a couple of significant highlights for gaming fans, not the least of which include the Xbox One launch, the release of Super Mario 3D World, and of course The Legend of Zelda: A Link Between Worlds. But I’d like to take the time out to celebrate the anniversary of one of the most significant titles in this interactive medium. A title that has no doubt played a large part in inspiring many audiences to look to videogames for providing that perfect sense of adventure, escapism, and discovery we’ve all come to know throughout the years.

The Legend of Zelda: Ocarina of Time is now 15 years old as of 11/21/2013, and remains my favorite videogame ever since I first experienced the Hero of Time’s gripping journey.

Ocarina of Time (and Majora’s Mask) got me into taking games seriously. While I had been playing games on SNES and loving them for their gameplay and wonderful 2D worlds, I got one hell of a different feeling when I first played Ocarina of Time. The world wasn’t just 3D, but it was beautiful in art style. Super Mario 64 was also a compelling 3D world, but it was still a mission-based structure when it came to exploring.

Hey! Listen! My cover of OoT’s Title Theme, made for this anniversary. The ocarina is a 6-hole version of Link’s own instrument from the game.

In OoT, the Kokiri Forest had personality, particles in the air, things to learn, and a sword/shield to obtain. The Deku Tree was extremely rewarding at the time, as it was designed vertically in the first room so players could take advantage of the 3D world. Dropping down into the lower floor by breaking the web, aiming in 3D with the slingshot, learning to target enemies, and finding Gohma on the ceiling was just the beginning! What a compelling first hour, though most people I know happily spent more than an hour in the forest. It was one of those games where you just wanted to screw around, look behind the Deku Tree, talk to people, and decipher that drawing on Link’s home.

But it’s the moment-to-moment reasons why OoT is legendary to so many. The writing isn’t especially complex, but the videogame way is to world-build and perform in it. Leaving the forest and saying bye to Saria, encountering the stupid repeating Owl and talking to your friends about him the next day (realizing that you weren’t alone in answering “yes” on accident), the grandeur of Hyrule Field, realizing you can’t visit Gerudo Valley because you’re too young (even though the great music tempted you), meeting the titular princess, and learning your first ocarina tune were just a few memories from the game’s first half. Then you’d meet the Gorons, who had a city that clearly spoke to what kind of dudes they were, and you would hear “Saria’s Song” guide you through the lost woods (genius). After that you’d meet the Zoras, their King that moved too slow (Nintendo trolling), the snobby tomboy Ruto, and the super-interesting Jabu dungeon. Then Link’s nightmare would come true right as you head happily to Zelda with the spiritual stones. Receiving the titular item in a twist, and then becoming the foreshadowed adult in the most unexpected way seamlessly upped the scale.

My performance of the diegetic melodies used for warping to OoT’s 5 temple dungeons.

Becoming the adult Link you saw in the title screen was played out in a dark, almost tragic twist. You were tricked as a child into letting the villain win, and you awoke as an adult realizing Link had slept away his childhood simply because he was involved in such affairs at a too-young age. The shock of seeing Castle Town ripped to shreds, plus Death Mountain with a menacing ring above it, and Ganon’s Castle replacing Hyrule Castle was powerful. It was effective because we already got to see, and play around in, the world as it should be. The feeling of loss works when you’ve had a clear picture of what was lost. You didn’t know what to do, only having this masked Shiek fellow to trust. You were a child in an adult’s body, but nobody recognized you when you went back to Kokiri Forest. Your home had Deku Babas growing, the Gorons had all been kidnapped, and the Zoras were frozen. This was strong stuff, and still is.

But even after restoring these civilizations via some of the most innovative dungeons ever made (like twisting Forest Temple corridors) you still got to traverse the places you always wanted to go to since Link’s childhood. The uniquely horrific Kakariko Well and Shadow Temple exuded startling grime with appropriately the only bloodstains and torture devices in the game. And of course Gerudo Valley, where you infiltrated a fortress, became a member, crossed a blinding desert, and conquered the Spirit Temple in both time periods. Oh yeah, and Shiek was Zelda (I didn’t see that coming, but it was very smart of the princess to hide). Then you reached Ganon’s castle to do a well-balanced “review” dungeon before taking on the strongest normal enemies in the tower, and fighting Ganondorf himself in a 3D tennis match (in itself a tribute to Agahnim). Finally, the Metroid-ish escape sequence, and the (surprise!) epic Ganon fight, complete with an amazing atmosphere. The ending sequence was specifically composed to pull at the heartstrings, and it was perfect to see the story send Link back to live his childhood in peace. An unnecessary thing to do after saving the damn world where everyone would champion him, but it drives home the additional themes of the Hero’s journey that other adventures (and other Zeldas) simply don’t maximize.

My novice recreation of the Temple of Time, alongside my piano cover of its music

In traditional Zelda fashion, there were secrets abound. The sidequests were more involved than ever before (ice arrow dungeon, mask delivery, gold skulltulas), and the minigames were very diverse (shooting, bowling, fishing, fishing, fishing). Unlocking the ability to travel time refreshed a LttP mechanic and placed it into a context that had different implications. Epona was completely optional, but who didn’t want to get a horse? I thought the bond with Epona was done very well; Link meets her in childhood, and then they reunite in adulthood.

Some of the problems people had with OoT were things I never had issues with at the time. The spacious overworld has been criticized for “emptiness”, which I assume is a comparison to LttP‘s overworld. But in reality, OoT‘s world is bigger and has more content than LttP‘s (from what I can remember). The previous games were simply more condensed. Hyrule Field was just one area, chosen to be a hub and add scope. All the typical Zelda world content was nudged out to the sides in a more natural arrangement. Navi, while not “cool” like Tatl or Midna, wasn’t ear-splitting like she’s been exaggerated to be. She also didn’t shout as much as people think, and the volume on her voice was set to a tolerable level. While I was a victim of the Water Temple as much as the next guy, it wasn’t the Iron Boots that irked me (3 second menus are nothing for an RPG player like me). It was my inability to find that damn small key under that rising platform! The water temple now makes for a good story in gaming for everyone to share, regardless of its notoriety. It’s still a beautiful temple though.

A lighthearted short film I made involving Zelda/Mario music and two strangers with common nostalgia. Enjoy!

It was even joked about at the Zelda Symphony, as the host said they wouldn’t play the Water Temple music so people don’t rush out of their seats in fear. Speaking of music, OoT probably has the best soundtrack in the series. While I do agree that certain songs in WW, MM, and LttP are serious highlights, OoT‘s soundtrack as a whole does the game huge favors. Ocarinas even increased in mainstream popularity after the game’s release. The additional focus on diegetic tunes was a smart decision, a natural step from the Ballad of the Wind Fish used in Link’s Awakening. The ocarina wasn’t just a single-use item, but a tool to interactively connect with very catchy tunes. Essentially, connecting musical themes to different functions and warp areas ensured that the player would make additional associations they wouldn’t have otherwise. In any other game, your optional horse or rainy weather likely wouldn’t have a memorable musical theme tied to it, but OoT established these things so easily for gamers. Now melodies like “Saria’s Song” and “Song of Storms” are infamous in gaming culture. Apart from these tunes, OoT also contributed its own slew of conventional tracks that stand with the series’ best while even paying respect to the past (the “Title Theme” is a variation on the recorder/whistle melody from the NES game).

OoT was a masterpiece, both in narrative and in gameplay design. The dungeons, the use of items, the layouts, and the distinct personality of the series elevated it like no other game at the time. One can still play through nothing but the main quest, and the relative lack of handholding and smooth pacing make it always enjoyable. It was 1990s game design at its peak. Nintendo wasn’t just trying to make Zelda acceptable in 3D, they put their hearts into this one… given such an inspirational boost from OoT‘s legendary predecessors. Together with Majora’s Mask (a perfect sequel that doesn’t downplay OoT in any way), the N64 gave us two of gaming’s most iconic examples of everything lovable about single-player gaming.

1998 was a hell of a year for games, so happy 15th anniversary to Ocarina of Time and all of those masterpieces from that special period.