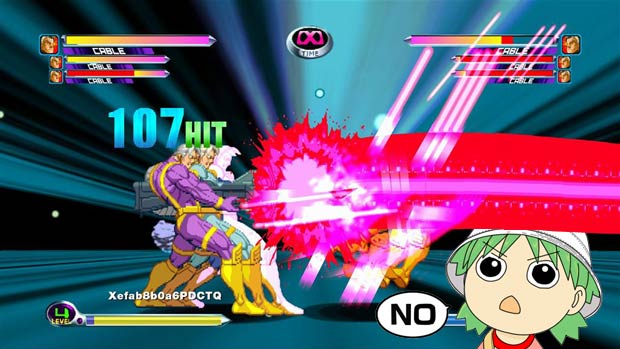 Capcom is releasing a patch today for both the XBLA and PSN versions of Marvel Vs Capcom 2. It includes several console-specific fixes to improve stability, as well as a few universal changes. Perhaps most notably, Cable’s Hyper Beam is no longer unblockable. Get your timing right, and the raep will cease.

For you purists out there, Capcom notes that this is a bug fix, and not a design change. A few other kinks have been worked out, such as Magneto’s Tempest dealing incorrect amounts of chip damage. Even better, the game shouldn’t crash anymore when two players enter a lobby at the same time on 360. The full list of fixes is posted after the jump if you’re intersted.

All in all, this should make for a truer, more playable port of the game, which is lovely. Additionally, the 360 leaderboards will be completely reset on Friday, November 6th. It’s going to be the Wild West of MvC2 out there, so if you had a formidable spot in the rankings, you’d better brush up your skills and get ready to go defend it.

– Cable’s Hyper Viper Beam has been fixed so that it is blockable if you block during the flash.  There were many reports that other moves had the same issue but they seemed to be incorrect.  Note, this was a bug fix and not a design change.

– Jin’s lp, mp, Cyclone Hyper was not combo’ing correctly.  This has been fixed so that it combos correctly.

– The title will no longer crash most of the time when using the “Search for Match” function.

– Overall online stability has been improved, particularly when using headsets.

– Occasionally, a users record will freeze or contain grossly erroneous ratings.  This has been fixed and if you have this problem with your stats, they will automatically fix themselves the next time you play a ranked match.  For example, if you have a frozen record, the next time you play after the patch rolls, your wins/losses/ratings should fix to what they actually are.  ***PLEASE NOTE*** I will be resetting the leaderboards (every stat) on Friday November 6th (my birthday thank you very much).  This was the consensus from Unity members when asked if they wanted the boards nuked or not.

– The game will no longer crash if 2 users enter a lobby at the exact same time.