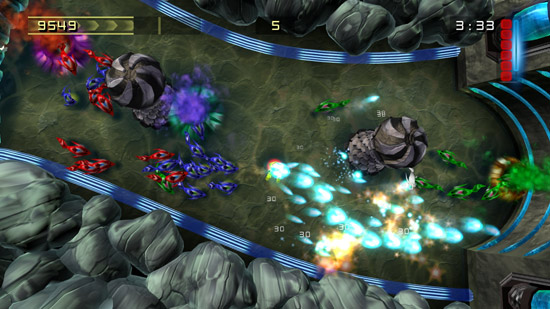 As if Wednesday won’t be exciting enough already with Halloween festivities going on, Mutant Storm Empire will also be out on Live Arcade for 800 Microsoft Points the very same day.

Anyone who bought their Xbox 360 at launch will probably remember the game’s predecessor, Mutant Storm Reloaded, as it was one of the very first XBLA titles for the system. As far as I recall, it was a decent shooter in the vein of Robotron 2084 and Smash TV, but it wasn’t amazing by any stretch of the imagination.

From the way things are sounding, Mutant Storm Empire should be much better than MSR. For starters, the game features 16 levels that are all connected together seamlessly, so you won’t have to sit through a single loading screen.

Mutant Storm Empire also offers online and offline 2-player co-op. My biggest complaint against the first Mutant Storm game was that it lacked online multiplayer of any kind, so let’s hope that the rest of the game can deliver as well.

Also attached with this week’s XBLA press release was the announcement that N+, Undertow, and a few other highly anticipated games will be released in the next few weeks. Hit the jump to see more on that.

In the coming weeks, look out for the following titles:

“Screwjumper!” (THQ) – Players take the plunge in “Screwjumper!” and free-fall into the depths of the chaotic underworld as a Screwjumper, driving aliens back to their home world by destroying their precious mining equipment.

“SpongeBob SquarePants: Underpants Slam™” (Nickelodeon and THQ) – In this quick and fun game, players search the kitchen of the Krusty Krab, the Flying Dutchman’s ship and the Armoury of Atlantis for 99 pairs of underpants.

“Switchball” (Sierra Online) – Based on real-world physics, “Switchball” is an intricate puzzle game set in a stunning 3-D world where players control an ever-changing ball along a narrow, winding course suspended in midair.

“Undertow” (Chair Entertainment Group) – This fast-paced action-shooter sends gamers underwater as they battle up to 16 players for control of the oceans! Players race to upgrade their units as they engage in non-stop conquest-style battles through multiple levels of combat action with some of the most stunning graphics ever seen in an Xbox LIVE Arcade title.

“Word Puzzle” (InterServ International) – The classic pen-and-paper word search game is brought to a new level of excitement on Xbox LIVE Arcade, complete with combos, high-score achievements and the ability to compete against others online.