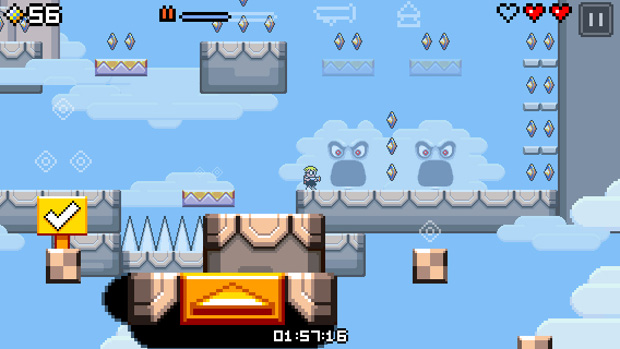 Quick impressions of the mobile port

Today is the day that Renegade Kid’s Mutant Mudds slip-slides onto Apple devices. If you’d like to double dip (or triple dip), it’s a paltry $0.99 on the App Store.

I’ve messed around with this latest build to see how it stacks up against the original and PC versions. Long story short, it’s the same Mutant Mudds we’ve played before — as I previously said, it has all the levels released thus far. In regards to the touch controls, while they probably won’t win over new converts, the register boxes of the virtual buttons are at least large enough to reduce the chances of anyone hitting dead space. On top of that, you can customize button placement for further ease.

There are two really significant changes this time around. First, levels now have checkpoint sign posts, so you don’t have to restart from the beginning should you die. Renegade Kid’s Jools Watsham tells me that this is to give the more casual mobile players fewer headaches, but I’m sure veterans will find the addition welcome as well. Nonetheless, if you are a purist and prefer to play sans safety net, you can disable checkpoints from the main menu.

Second, the absence of the depth-of-field effect from the PC version does indeed impact your judgment of distance. I always played the 3DS original with stereoscopic 3D on, so I never got a feel for the standard 2D view. I don’t know why depth of field wasn’t implemented here, but I hope it can be brought over with a future update. But even though the lack of depth perception is slightly disorienting, the game remains quite playable.

Overall, this is still Mutant Mudds, still a pleasant ride. Hopefully the mobile audience will be as enamored with the game as 3DS players were. And maybe a warm reception will push Renegade Kid into expediting its Mutant Mudds 2 plans.

After that Wii U version is out, of course!