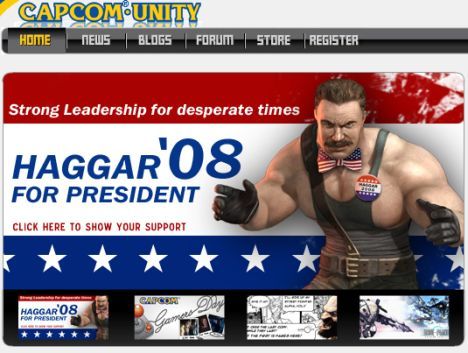 Firstly, if you didn’t know already, Mike Haggar deserves your vote in 2008.

Secondly, I am a man who prefers to remain stoic whenever possible. I try not to get too riled up about things. But let me tell you, in total confidence, that I absolutely lost my sh*t about five minutes ago. Why?

Because I just found out that the Capcom Unity website has officially backed Mike Haggar as a candidate for the 2008 presidential race, that’s why.

Not only is Haggar’s rough, mustachioed presence crouched and ready to attack on the front page, but Capcom has also manufactured some campaign merchandise. We’re talking Haggar 2008 buttons and bumper stickers, people. Get them while they’re hot. Haggar wants you to show your support, and you should want to show your support as well.

But what if you have no money? What if you love Mike Haggar, but can’t show him your love with the cash his campaign so dearly needs? Well, be patient. It’s highly likely that there may be a Mike Haggar photoshop contest in your future…