Epic apologizes and promises a fix

Muhammad Khan attempted to sign up for the Paragon beta — Epic’s upcoming MOBA — and was surprised to receive the following message: 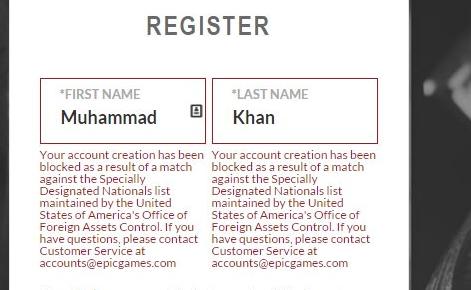 Khan then tweeted at Epic Games, stating, “My name is Khan and I am not a terrorist. #Islamophobia.”

This tweet prompted a swift response from the co-founder of Epic, Tim Sweeney, who replied, “Sorry, this isn’t intended. We’re working to fix ASAP. Cause: Overly broad filter related to US trade restrictions. Understood and sorry. This is bad filtering code. It checks a Federal export restriction list based solely on name!”

Paragon‘s sign-up page had reused some code from Unreal Engine 4 purchases to check against a list of names provided by the US government called the “Specially Designated Nationals list.” The US Department of Treasury describes the list as “individuals and companies owned or controlled by, or acting for or on behalf of, targeted countries. It also lists individuals, groups, and entities, such as terrorists and narcotics traffickers designated under programs that are not country-specific. Their assets are blocked and U.S. persons are generally prohibited from dealing with them.”

Apparently you can’t export UE4 if you have the wrong name which happens to be on a list from the US government. Weird, especially considering how popular the names Muhammad and Khan are.

“I’m surprised they didn’t catch it earlier, but am grateful Tim Sweeney apologized and his team worked hard to correct the mistake,” said Khan. “A lot of companies can learn from the way Tim Sweeney handled the situation. Grateful that we engaged in a dialogue.”

As of the time of writing, I was able to sign up for the Paragon beta with the name Muhammad Khan. All’s well that ends well.