[Christopher J. Oatis is the grand prize winner of Gamecock’s and Space Squid’s Mushroom Men fiction contest. He’s a the proud winner of many things, among them this writer’s dream come true — having their work printed on Destructoid. Congratulations, Christopher! — Nick]

Since the Spore Wars, the mushroom men of the Bolete tribe have passed down the legend of Shiitake. A mushroom with no origins, the only one of his kind, or maybe just some dinner leftovers someone sneaked through customs on their way back from Japan right before the comet came — no one was ever sure. The Bolete of the Dandelion Forest just knew he was different.

It wasn’t until the staff of brown herbs fell into their village that they knew his true value. Shiitake was one of the few that never inhaled the smoke pouring out of the flaming staff. He was the one asking all the right questions. “Where has it come from? Is it clouding our minds? Why are you all craving to breathe it after meals and right after you release your spores?”

The Bolete gave him no answers. Instead, they became irritable. They turned on each other. Some Bolete broke off from the tribe to seek out the brown herbs, with their only clues being the strange symbols on the side of the staff. Some staffs were engraved with the symbols C-i-g-a-r-e-t-t-e. Others only had the image of a four-legged beast on the side, or symbols that had been burnt away.

Shiitake started warning them that the only large beasts they need to worry about were the spider mounts the Amanitas tribe had been gathering on the Great Northern Lawn Chair Ridge. “Soon they will charge, and your people will be scattered about, grasping for foolishness.” 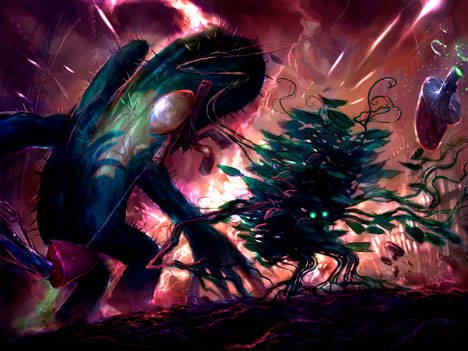 The Bolete were irritable. They didn’t listen to his words. They just looked at him with blank eyes, nibbled on their caps, or ground their teeth. Shiitake knew their addictions were too deep within their stipes, and he decided to meditate amongst the falling dandelions seeds until he could discover the stem of the problem.

His Bolete companions were less productive. They went on quests for the brown herb. Some returned with success, and others never returned at all, but some just stayed home and bummed the brown herbs off their friends instead of questing for their own. (There’s always a few in every tribe.)

Shiitake ended his meditation with a single thought in his mind. “The brown herb must have a source, just as spores must drop from a mushroom’s gills.” He departed early the next morning for the Compost Heap Canyon. Buried deep amongst the rotting foliage Shiitake knew he would find ancient weapons for his journey. The gears of an old watch supplied him with several throwing stars and he weaved blade-tipped-nunchakus out of pushpins and a piece of a bracelet.

An Amanitas scouting party found him shortly after he left the canyon; riders on spiders, five mounted warriors, galloped towards him. Eight eyes of death were watching Shiitake, closing in from every side. Venom dripped from their fangs, and Shiitake could smell their arachnid hunger as the Amanitas put spurs to their mounts, urging their legs to move faster.

Slowing his breaths, Shiitake examined the situation. Then he acted.

Everything happened fast. Time flew and so did watch gears. The unmushroom-like cries of the dying spiders echoed amongst the blades of grass. Wild, desperate legs kicked out in every direction, trying to gain purchase, but the spiders knocked over the other riders more often than they aided themselves. Four Amanitas were thrown and lying on the ground with cracked caps. One final rider stood between Shiitake and the edge of the dandelion forest. He rode a serpentine course and avoided Shiitake’s projectiles. Then the rider swung his mount around to flank the lone mushroom, but Shiitake spun and let his nunchakus fly.

The last Amanitas had a salad-fork-trident fixed on Shiitake’s cap, but his mount reared and turned over. Shiitake had popped all of the spider’s eyes out with his nunchakus like a sheet of bubble wrap. An audible squish sounded through the blades of grass as the crippled spider reared and fell on its rider. The spider screamed blindly into the darkness, and Shiitake offered an unseen bow to his enemies before leaving the forest. 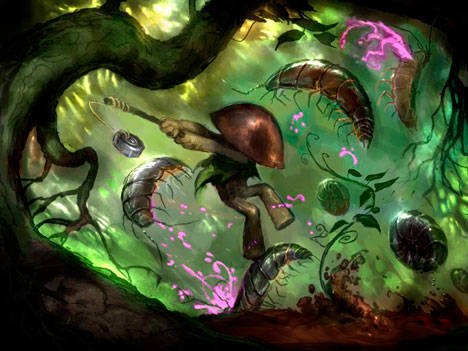 It was outside the forest, after a long climb onto the Picnic Table Plateau, and at the top of ivy vines that Shiitake found himself looking over the entire Dandelion Forest from a window ledge. He could see the lines of mounted riders preparing for their charge into the Bolete village, covering the Lawn Chair Ridge from the pillows to the armrests, and he could see the Bolete still wandering around like lost little spores, looking for dirt to settle in. Little time remained.

It is said by the Bolete that the sun never shone below Shiitake’s cap to reveal the mystery of his face. However, fortune was shining upon Shiitake that day. The source of the brown herb had found him. Two cardboard crates were lying on the windowsill he was standing on, next to an altar full of ash. Shiitake knew this must be where the Amanitas had developed their poison. He shoved as many of the staffs as he could into his belt and destroyed the rest.

Shiitake returned to the village just as the torches were being struck to life, and the Bolete gathered around him like flies to dog waste. They all eyed the staffs that hung from his belt. “I killed the five Amanitas who were guarding this. It is a weapon. They clearly must be catapulting these staffs into our midst to distract us and separate us. I have also seen their forces. A large cavalry gathers on the north ridge. If we accept the plague they have cast on us we shall surely perish. We may be mushrooms, but we don’t have to be kept in the dark and fed this crap.”

The Bolete watched the lone warrior throw the staffs of brown herbs at their feet. Then Shiitake walked right over to the south defenses, where number 2 pencils had been planted into the ground to keep the spider riders at bay.

One by one, the Bolete joined him. The herb remained untouched. Whether it was pride or shame that struck the Bolete, no one has ever questioned, but the feeling spread through the warriors of the village faster than the brown plague of addiction. 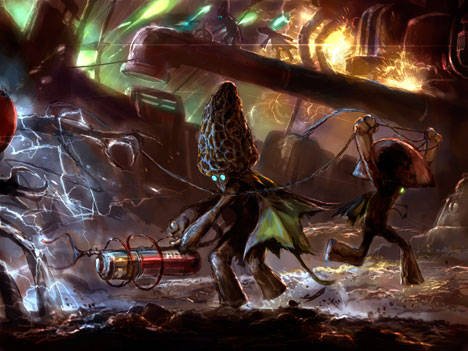 The Amanitas charge came and broke against the Bolete defenses. Wave after wave of riders rode into the pikes like moths to a bug zapper. Shiitake moved along the battle lines like a whirlwind, cracking and piercing any dismounted fungi that tried to squeeze through the defenses.

The invaders signaled retreat and Shiitake retired beneath his favorite dandelion and collapsed from exhaustion. That is how the Bolete retell the tale of the journey of Shiitake and the battle that followed.

But, it is also said that when the morning sun rose, many young Bolete staggered under his dandelion to thank him for helping them rid the village of the brown herb plague. Shiitake only bowed, but then heard the sound of slurred and angry words coming from the forest. When Shiitake rose to his feet to investigate he see could the turmoil that was shaking the dew from the grass.

Two Bolete were fighting and wrestling in the grass. Another was lying on a rock holding his stem and expelling out a large spray of spores. A third Bolete was hugging a fellow warrior, telling him he was the best mushroom he had ever known.

“What is that?” Shiitake asked pointing towards an overturned aluminum vat.

Shiitake saw yellow-colored liquid seeping out of the cracked vat, and there were large symbols, B-e-e-r, printed on the side. He drew in a long breath and shook his cap.

Shiitake’s fate was as it was, and he accepted it, but the mysterious warrior was going to have a long week in the dandelion forest.

Christopher’s short story, along with the other winners of the Gamecock/Space Squid Mushroom Men contest can be read here.