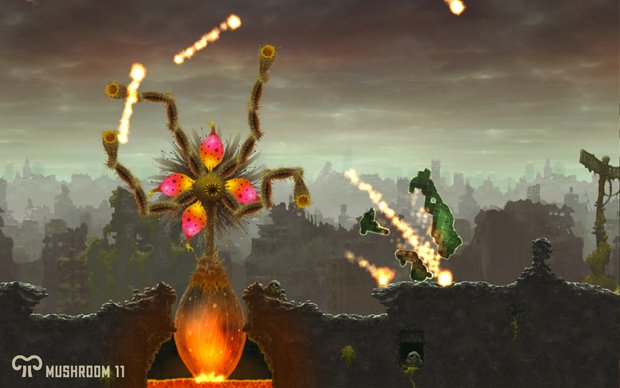 No puns this time, I swear

Everyone I know who’s tried Mushroom 11 won’t shut up about how good it is. After clearing the first two levels today in a preview build, I’m joining them. 25 minutes well spent.

This is a puzzle-platformer unlike any I’ve seen before. You guide a green blob through a post-apocalyptic world — up cliffs, through tunnels, over toxic sludge — by erasing parts of it. Each time you click on the ooze, you’ll trim its cells and fresh replacements will pop up somewhere else; do this enough and it’ll start to move (though not always in the exact direction you want).

It’s fun to aimlessly “push” the blob forward across the ruined world, but traversing obstacles requires careful planning, quick improvisation, or both. In one puzzle, I anchored the organism to the perimeter of a cave suspended above lava and chipped away at it in such a way that a makeshift limb stretched down and left toward solid ground without falling straight to its fiery doom.

A later section, a boss fight against a giant mutant spider, involved launching the blob off a seesaw and navigating up and around the creature’s jabbing arms. Sequences like this are frenetic. You have to rapidly erase cells to maintain momentum but you can’t overdo it; the blob won’t rematerialize mid-air. Brute-force attempts at puzzle solving proved futile by the second level.

All that said, I’d recommend watching footage or, better yet, playing the game yourself next year on PC/Mac/Linux (pre-orders come with a preview). It’s tough to convey what makes Mushroom 11 such a treat in text, but pick it up and you’ll understand the appeal in seconds. Tell your friends.