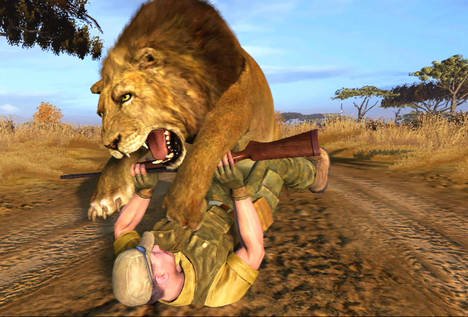 I just killed an Impala (no not the car) and strung up its corpse on a tree some where on the African plain. I then covered my scent, used a lion call in an attempt to attract some bigger game and then took cover by a nearby tree in a shadowy area waiting for a lion to approach. Unfortunately for me, my hiding spot just so happened to be in the same path as the lion was taking to investigate the lion call.

My character gets surprised from the back and the God of War quick time event starts up. I swing the six-axis controller in the air in different directions to avoid the lion and smack it around a little with the butt of my gun. I then whip out my pistol and shot the lion right between the eyes. Humans: 1 — Mother Nature: 0

As you’ve no doubt figured out by now, Cabela’s Dangerous Hunts is a hunting game where you hunt dangerous creatures. Lions, alligators, hippos, buffalo, wolves, and much more will all be available for your murderous joy. Hit the jump to find out more about Dangerous Hunts. 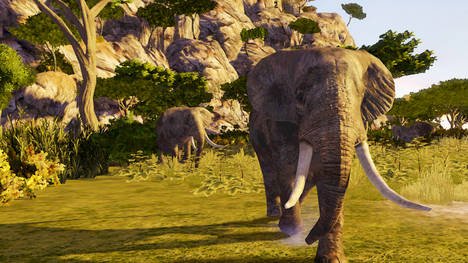 Cabela’s Dangerous Hunts is broken up into three modes:

The Campaign starts off with the main character Clint and his friend out hunting for animals in Russia. After a few words, the player is told to take out a nearby deer foraging for food. Clint is sharing some words with his friend after killing the deer when a big old mean bear comes barging in.

This is where the game introduces you to the quick time event freature, as mentioned earlier. With the PS3 version of the game, you’ll swing controller in different directions to avoid or hit a creature with your melee (the Xbox 360 version of the game will require the player to mash buttons). After a few seconds, Clint plays dead and the bear runs off. Clint’s friend is also playing dead, but that’s because he actually is dead. 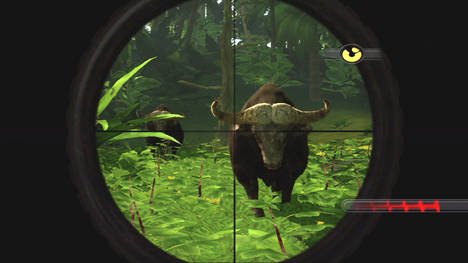 So then the game turns into a worldwide hunt for this bear as Clint tries to get his revenge on all the bears of the world. OK, that’s not true, but wouldn’t it have been awesome if it were? The campaign actually then takes you one year later in Clint’s life as he’s hunting game in Africa.

Each level in the game will have specific goals you must meet within a certain amount of time. In the case of this first part of the African map, I needed to lure a lion with bait as described at the beginning of this preview.

The game gives you goals, but it’s up to the player to figure out where they need to go. Players will have access to an ability called Hunter Sense. When activated, the environment turns black and white and important locations and creatures will have a highlighted glow to them. The hunter sense will also show you fresh tracks left by creatures on the ground and give you some basic information on creatures you’re currently focused on.

Since you’re in the wild, a lot of unexpected things can happen. At a later portion in the game, Clint had to take down a buffalo that was proving to be too hard and was constantly killing us. Shortly before taking the buffalo on for the fourth time, a giant boar came out of nowhere and attacked Clint. 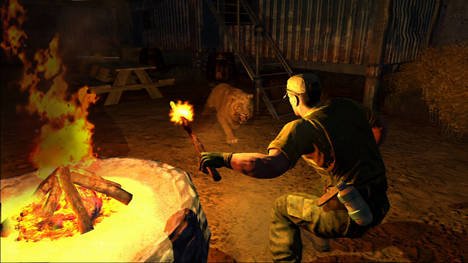 The game does offer a lot of freedom, but there will be some points where you’ll be on a set track. Shortly before arriving to the buffalo, Clint is on a boat in a river filled with hippos and alligators. You have to kill every single one of these creatures before they get too close to your boat, otherwise they will knock the boat over. Thankfully, there’s unlimited amount of retries, as well as unlimited ammo for your guns.

After playing with the Campaign for a bit, I got to try out the Action Zone. The player is put in a small enclosure and has to take out wild creatures as they’re attacking. The creatures will come to the player so all you need to do is take them out. The first challenge I tried was the bears. At first, there are two bears you need to kill. After they’re killed, you’ll jump through a portal (yes, really) to take on more bears until you’ve completed all the challenges.

I found the bears to be extremely easy so next I tried the wolves. The wolves are a smaller target, and were able to take me out as it was hard getting a clear shot on them. How many wolves did it take to kill me? I want to say 70 for all of you Dtoiders, but it was more like 12.

You’ll have rifles, shotguns, pistols and more all at your disposal and all the weapons can be upgraded. The player will also have an adrenaline boost that slows down the action, Max Payne style, which is very helpful when you get surrounded by a pack of Hyenas.

Cabela’s Dangerous Hunts will see players visiting over ten locations with tons of wild game to shoot at across the globe. The game will be about a 10 to 15 hour long affair and should be out by the end of this month for the PlayStation 3, Xbox 360, and Wii.