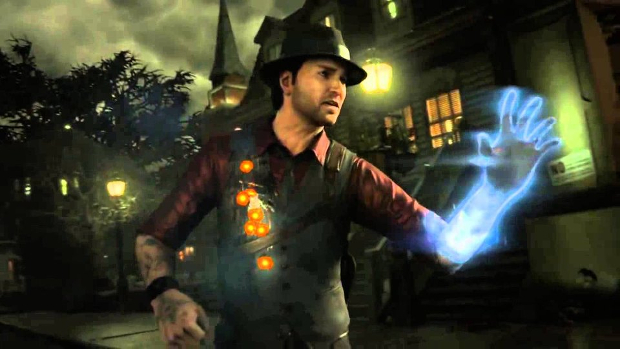 Fedora. Lame vest and tie combo. Watch — or worse, wallet — chain. Man, the protagonist of Murdered: Soul Suspect looks dumb. Certainly has nothing on the style of Ghost Trick: Phantom Detective‘s lead, though I soul suspect that to be intentional given how similar the two games’ central conceit is. Still, nice to know that Microsoft will be populating its ghost town — the Xbox One — with this ghost story.

Murdered is coming to PS3, Xbox 360, and PC this spring. No word on when it’s coming to Xbox One, or if a PS4 release is also incoming, as this developer diary came out of Xbox Canada. It’s got some hilariously serious, deadpan explanations of the game’s otherworldly conceit, though. For example:

“You ask him to find ways to investigate crime scenes in completely new and original ways, ways that only he as a ghost is capable of,” and “It was interesting when we started developing this game and started asking ourselves what does it really mean to be a ghost, what is the fantasy of being a ghost, what is it you want to do as ghost?” (Besides creep on naked people, I guess)

For as much snark as I’m throwing, I’m quite interested in Murdered (watch 25 minutes of it here). It’s a new IP and another shot for games to not screw up proper detective mechanics. If it will let you fail, anyway. I still need to play that Blade Runner game. Also interesting to consider: just how few games have “murder” in the title.