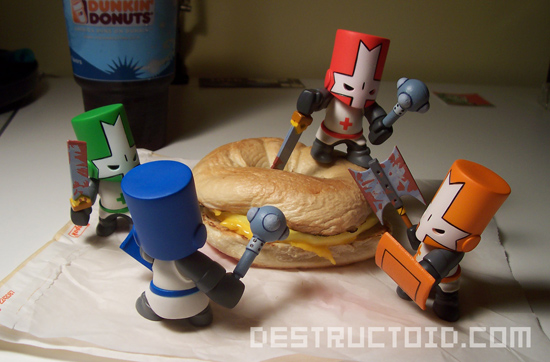 When Brad Rice approached me about starting a new feature, I immediately grabbed my wacom pen and chased him around the office making stabby motions. I have enough to do without him dumping more on my plate, and this time he’d gone too far. I pursued our helpless Features Editor through the long halls of Dtoid headquarters and tackled him at the top of the stairs, where we tumbled down two flights and landed in front of the supply closet we let Nextlust work out of. I raised my pen high in the air and shouted “If we’re about to die anyway, I’d rather die fighting! Come for me, G’mork, I am ATREYU!!” Brad began to curse at me in Japanese, and the only word I could make out through the screaming was “omocha”.

“Wait, you want me to write about toys?”

Thus was born this new feature on game-related toys and figures, like those that are often packed with a special edition release. The first installment was supposed to be about the Big Daddy figure that came with BioShock, but as my 360 is currently undergoing surgery, I don’t have that yet. What I did add to my collection recently, however, was a set of four colorful little badasses, which you’ll hear all about after the jump.

My Castle Crashers. Let me show you them.

It’s no secret that I’m a huge fan of anything Dan Paladin touches. Couple this with my toy and figure fetish, and you’ve got me cleaning the spider webs from my wallet to see if there’s anything in it for me to throw at you. As Colette said when she first told us about them, these exclusive Castle Crashers figures are only available at conventions like Comic Con and PAX, which is where I got my hands on them. There are currently no plans to sell them online, but judging by how many of us went home with them stuffed in our suitcases, their popularity may yet offer hope for any of you who couldn’t make it to one of the events this year.

They’re about 3″ tall, and made of the same quality vinyl that designer toys from guys like Frank Kozik and Michael Lau are made with. (Check out Kid Robot if you have no idea what I’m talking about.) They’re articulated at the wrists, shoulders, neck and waist, and designed to look awesome no matter how you pose them. Each comes with a matching shield and all four weapons from the game, including the sword, mace, battle axe, and the dead fish.

Also included is a display case and a stand, which holds whatever weapons the little dudes aren’t weilding at the moment. These accessories will likely see the least use, because as evidenced by Charlie Suh’s last few blog posts, the figures are just too damn fun to leave on a shelf for very long. I’ll let the gallery do the talking, but if you missed Colette’s earlier post, these guys go for $20 each or $60 for all four. I don’t know for sure if The Behemoth will be attending E for All, but in case you’re there and find these guys on the show floor, you should know that they’re worth snatching up while you have the chance. You should also know that Mr. Paladin is a nice guy who just happens to carry a Sharpie around with him.