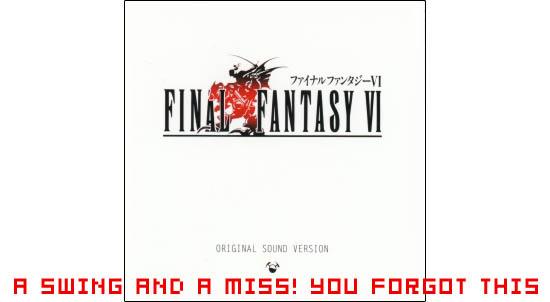 You know, I always cringe a little when the mainstream press covers the video game industry in any way, but MSNBC did a pretty good job with a no-brainner top five list of the most memorable game tunes. There’s still a little bit of “cringe action” worked in — never mind that this is something you’d expect to see on one of those silly video game blogs. In honor of those silly blogs, I’ll respond in silly blogger style.

Of course, Super Mario Bros is listed. It’s a natural, although they incorrectly list the song as the “theme song.” The “overworld theme” is called “BGM 1.” Koji Kondo would forgive you, and so do I.

Halo is also listed, and is a great choice. There’s no questioning that the Halo’s theme sticks in your ear. It’s too bad the score for Xenogears was compared and dogged in the process. For most game music fans, those are serious fighting words, and the various Xenogears themes have made their way into many a concert and album. What’s more is that composer Yasunori Mitsuda would throw his head back and laugh at the comparison.

Ms. Pac Man is a solid choice that gets no complaints from me. I’ll even agree with the comment about the following pellet pick-up sound effects.

The Zelda series is another given, and we agree that just about every Zelda title had very memorable music, though some (Ocarina of Time, The Legend of Zelda) were more memorable than others. It probably would have been good to mention that most Mario and Zelda games share the same composer, Koji Kondo.

Finally, there’s Final Fantasy VII. First off, a major nerd rule was broken by using the numeral “7” in the title instead of the roman numerals — you just don’t do that (unless you don’t know or care). That’s like bait for those silly bloggers. My biggest cringe of the whole feature happened after reading that “the music from this game was so popular that it was released as a four-disc album.” Silly Ken Smith of MSNBC, all Final Fantasy scores are released as albums, and many of them are multi-disc. And everyone knows that Final Fantasy VI is the best of the Final Fantasy scores. Duh.

Filed under... #mario#The Legend of Zelda