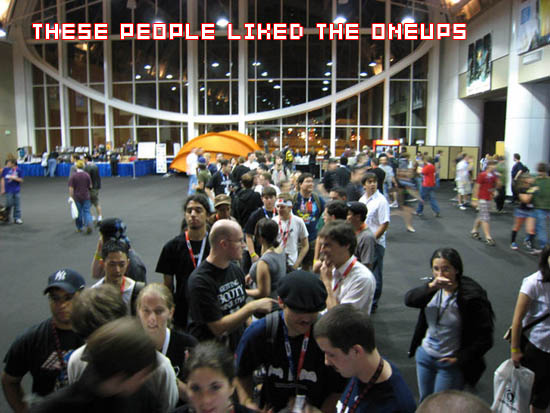 MSNBC has been all about the game music lately, haven’t they? Today they posted a feature on the video game cover band The OneUps, covering their recent performance at the 2007 Penny Arcade Expo.

The feature talks about the seven-piece cover band’s struggle for the last several years to land a big gig, and how they finally ended up PAX, playing a show for over 5,000 people.

After their 23-song set at the show, the line in front of the band’s booth stretched almost all the way back to Arkansas [see above picture]. They sold hundreds of CDs. Fans came up and told them how awesome their music was, how different it was from the usual rock stuff.

The band hopes to be invited back to play at PAX, and Mustin says they’d like to make a two-disc album and release it at the convention. And Mustin wants to record the entire soundtrack to Super Mario Kart.

Read the full article “Making music out of Super Mario Bros” at MSNBC.

[FD: Okay, you got me. I’m one of the OneUps. But, I’m a blogger, and there are no rules for bloggers! Forgive me, Dtoid readers — I’m totally shameless! Destructoid’s very own Nex already did a wonderful (and flattering) write-up of our band’s performance, but I won’t lie — it’s great to see the mainstream media cover my band.]