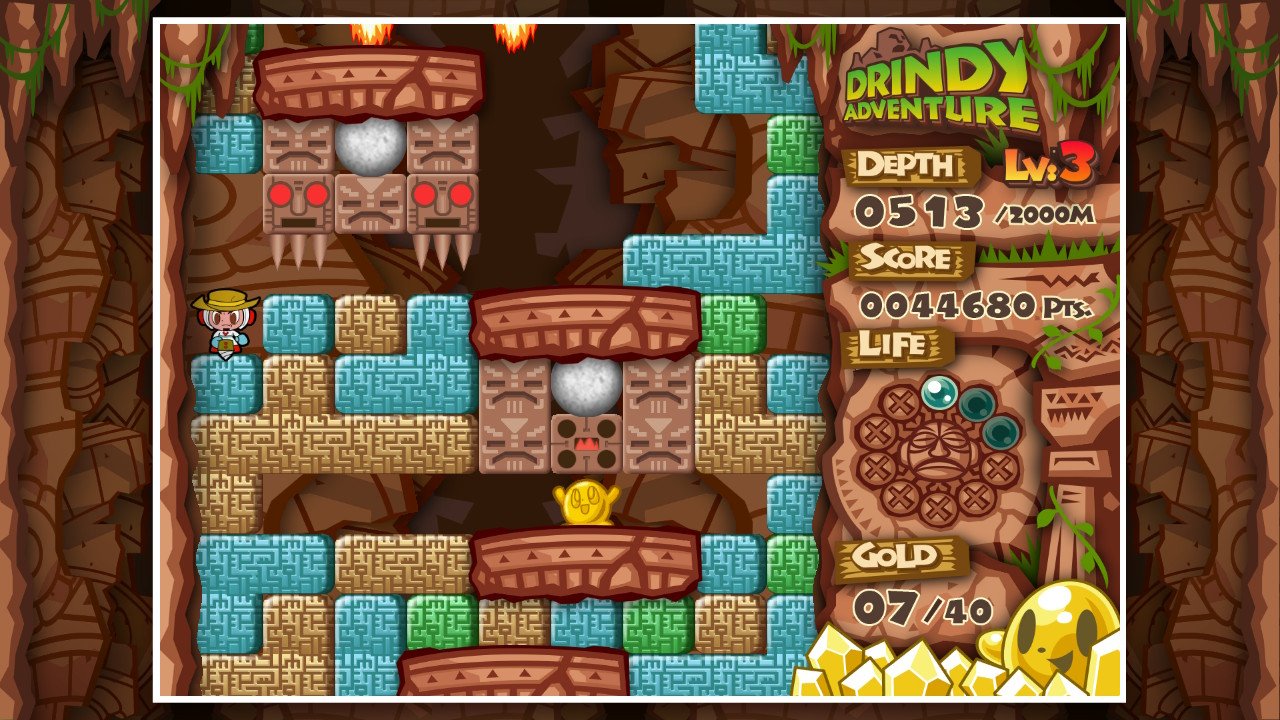 I don’t know what it was about Mr. Driller that drew me to it in 1999. Maybe it was the beautiful color scheme, or the adorable mascot.

Either way, the Arcade/PlayStation/Dreamcast original made me a fan for life. So you better believe I’m here for the Mr. Driller Drill Land remaster on PC and Switch.

As a bit of housekeeping, Drill Land is actually the fifth game in the Mr. Driller series.

Don’t worry though, as there’s no real lore or continuity you’re missing out on: just know that you’re playing as the son of Dig Dug, Susumu Hori, and you’re all good. Drill Land also happens to be a spinoff of sorts, which contains multiple modes of play beyond a traditional campaign-like World Tour mode that takes you through an underground theme park. This is great news for folks who are brand new to the franchise, as it contains a veritable smorgasbord variety of gametypes to try out.

Your job is simple: in most cases, reach the end of a level by digging to the bottom without getting crushed or running out of air. Strategically planning your digs to avoid topping the infrastructure with assist with the former, while grabbing power-up air tanks will allow you to survive the latter task. Six base characters are at your disposal, all of which have slightly different playstyles. It’s harder than it looks, and that’s the basic charm of Mr. Driller.

In essence, the bulk of the game involves holding a direction down while you press the A button to drill, but it’s how you choose every move you make that really matters. Digging into a mass of color will immediately remove the whole block, while matching toppling blocks will eliminate them in turn. You’ll also need to navigate annoying “X” blocks, which cost air to dig through.

Beyond the main mode, there’s also an Indiana Jones-like theme that adds traps into the mix (Drindy Adventure), a mode where you battle ghosts (Horror Night House), a fantasy zone with RPG-like elements (The Hole of Druaga), and sci-fi stages (Star Driller). All of these contain lighthearted new themes and alter the gameplay slightly to mix things up. The themes are all on point as they don’t drastically change the core of the game and are on-brand (read: cute). Beyond the scope of extra modes, options are the name of the game for the Drill Land remaster. There’s an easier “casual” mode, as well as “classic,” which re-creates the original 2002 GameCube experience.

You can also opt for solo play or multiplayer (race or direct competitive) for up to four players. The extras are also deep, and include things like a library that explains the in-universe lore for each activity, alongside of classic old school things like a sound test or cutscene player. It’s a fun game to just get sucked into for days at a time. A new coat of paint is pretty much all this classic needed, as the full [Japanese] voice acting and timeless art style already transfer naturally.

It was a joy to revisit the world of Mr. Driller again, and the Switch is one of the best places to do it given the pint-sized level-by-level format. Don’t let the price scare you: puzzle fans will get a lot of play out of Drill Land.

[These impressions are based on a retail build of the game provided by the publisher. Score – 8.5.]