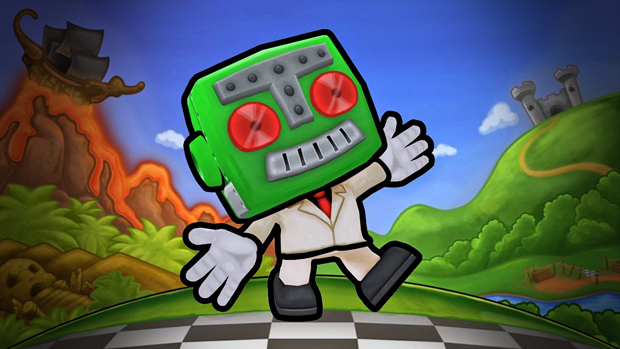 Destructoid is pleased to announce that its iconic mascot, the inimitable Mr. Destructoid, is returning to the world of videogames in Halfbrick’s upcoming Xbox Live Arcade game, Raskulls. The fearless robot leader of the Destructoid community will be a playable character in the side-scrolling party game, unlockable during the course of the single-player campaign.

Raskulls is a cross between platforming and racing in which up to four players compete. Breaking blocks in a Mr. Driller fashion, collecting power-ups, and screwing over your friends is the order of the day. Mr. Destructoid joins a cast of silly and cute characters including King, Koala, Devil, and a rat that is also a pirate. It’s called a “pirat.” That is a pun.

We’ve worked really hard with Halfbrick on this endeavor. We saw in Raskulls a potentially great game worth paying attention to, while other outlets in the gaming media overlooked it. We cared about Raskulls; Halfbrick cared about us. It’s relationships like these that set Destructoid apart from your average gamer blog. We’ve always been grassroots, and whenever we can, we’ll help other grassroots companies.

Rey Gutierrez, of Destructoid Video, created the announcement trailer, as well as the epic site wallpaper that we’ll be using to promote the news. This marks the very first official game trailer created entirely by a member of Destructoid.

Mr. Destructoid is also a playable character in Hudson’s Bomberman Live (XBLA), Bomberman Ultra (PS3), and Xbox Live Indie Game Agent Moo: Maximum Overdeath, and was an enemy in (also, of) Eternity’s Child. This will mark the blogging mascot’s fifth official appearance in a game. We’re all thrilled to be able to make this announcement, and we hope you’ll check out Raskulls to see your favorite robot in action!