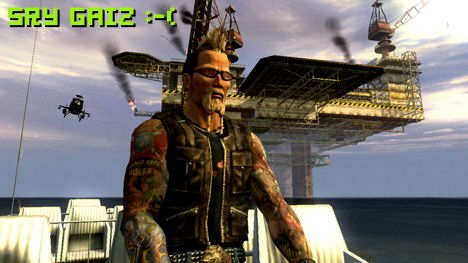 A few days ago we reported that Electronic Arts had commandeered a gas station in London to give away free petrol. The marketing stunt was promoting freshly released sandbox game Mercenaries 2 and lucky motorists were offered £40 worth of fuel each.

Unfortunately, because people can’t be trusted with anything, there was disruption, chaos and arguments surrounding the stunt. As motorists became gridlocked in the ensuing shenanigans, police eventually shut down EA’s operation.

In the wake of the stunt, Member of Parliament for Hornsey and Wood Green Lynne Featherstone has demanded an apology from the publisher. “Trying to recreate Venezuelan-style fuel riots on the streets of London is completely irresponsible and downright dangerous,” scolded the MP. “Whilst a lucky few might have got some free petrol, hundreds of local residents have faced misery on their daily journeys this morning. They deserve an apology.”

It’s a shame that things went wrong because it was a genius idea, but EA should have known that people would not be able to cope with free petrol, especially with the fuel situation and the current economic climate. Or perhaps EA knew perfectly well what it was doing and counted on this controversy. I wouldn’t be surprised.