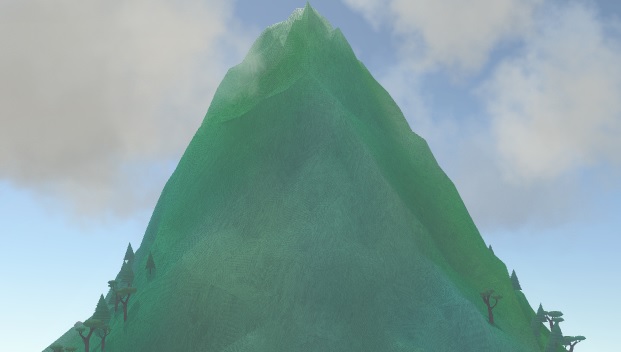 When I was younger, I used to stare at this one screensaver for hours on end. It involved a guy getting stuck on a desert island, and he would get involved in various antics for what seemed like days. I’d rarely ever see a repeat, because while I was getting on with my day periodically I’d come back to check on him, and see something new. That’s kind of what Mountain is like, but a little more serene.

Mountain is created by filmmaker David O’Reilly, who is responsible for the videogame sequences in Her (NSFW). The concept, describe to me by David, is that it’s a simulator to keep running in the background. Over the course of time certain events might happen to your mountain, like a plane crashing into it and getting stuck, and so on — he promises 50 hours of events, of which I’ve seen around 10 so far.

Now, the game is partially interactive. You can use the A-K and Z-M keys in a line on your keyboard to play musical notes. Said notes will accelerate the speed of time if you play it in a melody or rhythm. It’s not evident what rhythms work best and what the time-skip does at any given moment, but it’s fun to play around with. You can also trigger thoughts to appear from the mountain itself by pressing the period key, and thoughts will periodically pop up from time to time. There are no traditional controls though.

For everyone expecting a full simulator with tons of tools at your disposal, you’re going to be disappointed. This is a minimalist program just like Johnny Castaway, and part of the fun is watching, not playing.

If you’re interested, you can buy the game today on PC and iOS for $1.