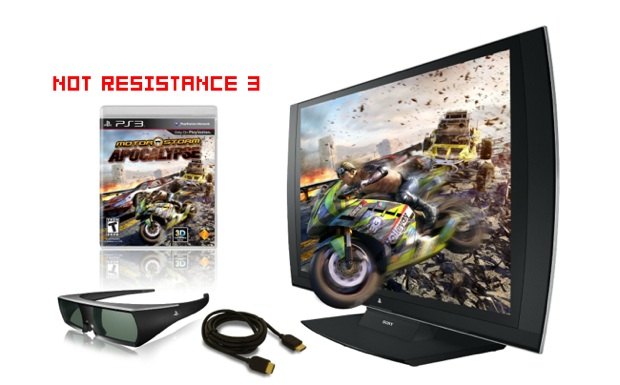 Remember that PlayStation 3D display that was announced during Sony’s press conference at E3 this year? They told us that the 24″, $499 set bundle would come with a pair of 3D glasses, an HDMI cable, and a copy of Resistance 3. But today we saw an Amazon.com link for pre-order, and MotorStorm: Apocalypse was listed as the bundle game. Later we saw that GameStop had an even more confusing bundle listing, with both MotorStorm: Apocalypse and Resistance 3 listed as bundled. Finally, an Insomniac Games tweet really had us wondering. We checked with Sony for the final word, and here’s what they told us:

The PlayStation 3D Display announced at E3 will now be bundled with MotorStorm: Apocalypse, instead of Resistance 3. MotorStorm Apocalypse, the latest installment of the popular racing franchise, offers high-octane action and was built from the ground up for 3D — making it a great out-of-the-box experience for all types of gamers. Its split-screen racing mode is perfect for the 3D Display’s special two-player feature, which allows both players to see individual, unique, full-screen images of gameplay. The 3D Display will be available this fall/holiday, as several blockbuster PS3 exclusives will be launching with 3D, including Uncharted 3: Drake’s Deception.

No other reasons for the switch were given.

Perhaps MotorStorm’s split screen is a better fit to show off one of the coolest features of the display. Does the changing of this pack-in game change your mind on ordering this display?