One of my favorite types of games from back in the day was the side-scrolling beat-’em-up. Though the sub-gene has sorta evolved into more standard and narrative-based action games, I still feel there’s more to be done with these games in the current market. I was always a Streets of Rage guy myself, and I enjoyed barreling through foes with friends while we cheered and booed whenever coming to blows with challenging baddies. Thankfully, the folks at Devolver Digital recognized the need for a new retro-styled brawler and picked up Mother Russia Bleeds.

While hanging out at Devolver’s space across the street from the Los Angeles convention center during E3, I spent some with the developers and played local co-op. I’m a huge admirer of the title, which aims to be the darkest and most violent side-scrolling brawler you’ve ever played.

Set in an alternate universe where the USSR has been crippled with crime and drug abuse, leaving society in an ever-present dystopian fugue-state, a group of street fighters take it upon themselves to fight back against the criminal element. Addicted to mysterious drugs in syringes that enhance their abilities, they’ll have to use their skills to take down the Russian mafia, the powerful government, and a secret society of sexual deviants to exact revenge on those that have laid waste to the motherland.

While the plot is pretty standard for a beat-’em-up, the story gets damn dark throughout. What’s interesting is that you’re not necessarily a good guy — just a lesser shade of grey roaming the streets. The presentation does a great job of pulling you into this twisted world. Much like Hotline Miami, it uses dark and hypnotic lights to set the tone, and also manages to mess with your head. There were several points where I really tripped by the visual style. And I mean that as a good thing. The style is trance-like, and once it gets you, it doesn’t let go. 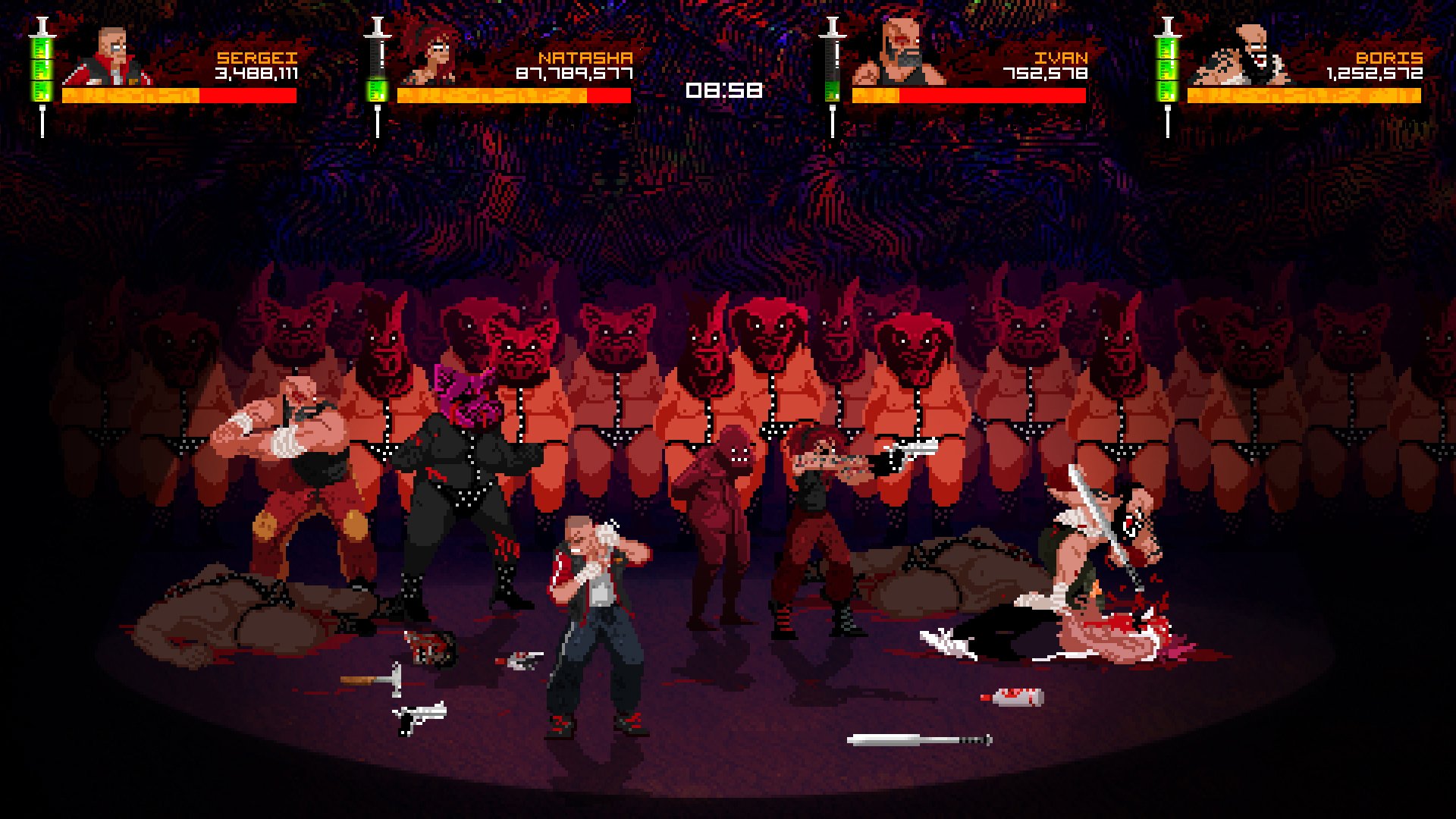 Much like the classic titles Mother Russia Bleeds pays homage too, its controls are largely easy to get into and remember. With a combination of heavy and light attacks, including grab and dash moves, you’ll be able to take out the various enemies trying to rush you down. You’ll also find weapons and gear in the field, such as bats, guns, and bar stools. Moreover, each character possesses their own moveset and stats. Out of the three characters available, I chose Boris, a seemingly homeless brawler with serious speed. With his moves, I made quick work of the mobs. Oddly enough, friendly fire was enabled by default, which made battles hectic but also irritating. Thankfully, you can turn it off (unless you’re in need of an extra challenge).

With that said, there are a number of cool additions to the traditional mechanics. The syringes that the fighters possess grant them buffs for periods of time. When used, the screen turns dark and the fighter on his high will gain super speed and increased strength. Also, they get access to a unique fatality, which instantly kills one enemy. They’re brutal and satisfying to pull off, but you’ll sacrifice the remainder of your buff period. Also, syringes are used to heal yourself and revive downed allies. Though if you’re running on empty, you can sacrifice some of your own life to revive them.

Playing Mother Russia Bleeds was a trippy experience. Though there were a number of odd quirks they’ll have to iron out before released, I was very pleased with what I played. We also got a peek of some upcoming features outside of the story mode. Along with Boss Rush, challenge missions, Arena, and Versus play, the developers plan on giving the people the total package. I got the sense that this was made from folks that loved the genre, and with their aspirations to help revitalize the brawlers, I can say fans will find a lot to admire here.