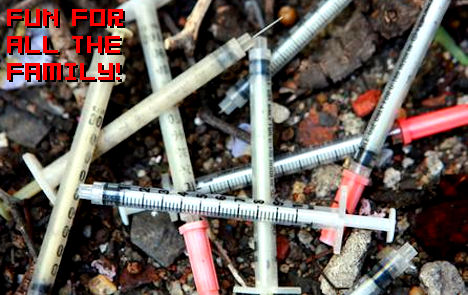 There’s nothing like the “I was personally affected by this, hence I want it banned” routine. The mother of a British heroin “victim” wants iPhone App Underworld, a game we mentioned last week, banned because she feels other children will be as stupid as her daughter was.

UK tabloid The Daily Star reports that Amy Packard has been comatose for seven years following her decision to screw around with the drug. Amy’s mother Thelma wants Underworld abolished, because of course, getting rid of a game that didn’t exist when little Amy was strapping a belt to her arm and playing human pincushion will rid the world of all drug problems.

“My daughter’s life has been ruined by drugs,” protests Thelma. “If this game is allowed to come out, impressionable kids will play it and Amy’s mistake will be repeated over and over again. Youngsters like Amy are exactly the people who download and play games like this on their mobiles.

I just want to help other families avoid the nightmare that’s wrecked mine.”

Underworld is a stupid idea for a game, and even a little bit creepy, but as always, I must argue that wanting to ban something you’re personally upset by is far more offensive than the source material itself. If parents want to load up their spoiled brats with iPhones and let them run around unchecked, they’re asking for trouble.

If you take heroin, you’re a bloody idiot. No amount of censorship will make stupid teenagers smarter. Oh, and what are the odds that Thelma Packard has never even heard of this game until The Daily Star showed it to her?