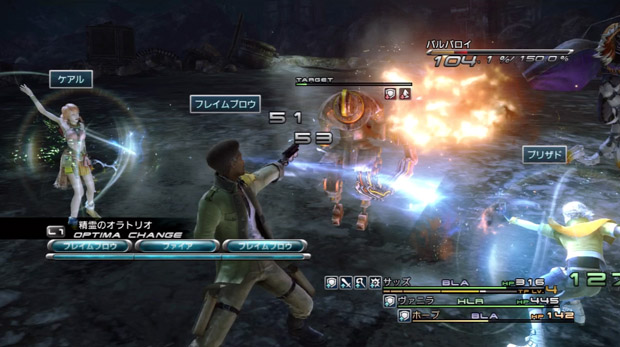 Don’t worry about spoilers in these new Final Fantasy XIII screenshots we’ve created for you. The only things spoiled are inconsequential at best. In fact, I’m so sure that you won’t care that I’ll lay them out for you here.

Spoilers of no consequence in these screens:

See? Nothing important. Just pretty pictures for you to admire. These take place about 5 or 6 hours into Final Fantasy XIII and show both story elements (ahh, fireworks) and battle screens. In the battles, you can see Hope, Vanilla (seriously) and Sazh doing their thing. You’ll also see examples of the Optima Change menus. As the game progresses, changing “jobs” multiple times in mid-battle becomes important.

We’ll put together more screens of little spoil action for you later this week.

And about Sazh? He’s seriously into the young white meat. More on that later.