One of the characters highlighted is the lovely Lynn Silverman. (You may remember her from the video last week.) She’s described as a “thinker” and a haunted little girl. She was nabbed and brought onboard the Dark Athena with her criminal mother and her father. Riddick meets Lynn in the Athena’s vents. She decided to hide after her father was turned “into a ghost drone.”

My question is, will Riddick play the nice guy with her or will he let her rot inside the vents? I’m hoping for some villainy, but I’m willing to bet that Riddick finds a place in that black, shriveled heart for Lynn.

Hit the break to view the character profiles, complete with disembodied mug shots. And don’t forget the game hits stores on April 7. 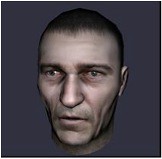 “I’ve been around most warzones in these parts of the ‘verse.”

Calm, level-headed. Has seen a lot of shit in his life-time, it takes a lot to phase this guy. Is extremely lonely, all his friends are dead, his wife died in the Newland transport – a plague that are common on long-flight colony transports. Max Dacher was a marine for 40 years before retiring because of a bad eye – he lost it during battle. Getting little to nil in retirement funds, he had to struggle to get by together with his wife living in the harsh environment on Leiden-9. He took a job as a janitor on the Newland transport to start a new life on another planet, away from everything. Halfway during transport, the colony plague struck the ship – a plague that is very common on longer flights with unsanitary conditions. Watching his wife dying rapidly in front of his wife – a particularly gruesome death as well – was too much for him. He tried to commit suicide in the engine room of the Newland. That was when he found Lynn. He helped her find a home and a family and he found a cause in his life, to protect other people. 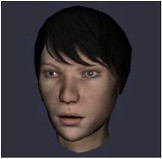 “I’ve seen what they did to some of my friends from the Newland. Death is a much better option.”

A skilled spaceship technician longing for a better life somewhere else.  She was captured for Drone process by the Athena mercs when working on the Newland colony transport, together with her husband and daughter. Deeply disturbed and traumatized.  Ellen longs to see her kid again; her eyes are red and tired. She sees Riddick as her saviour. Has a fiery temperament and fiercly protective of her daughter, Lynn. 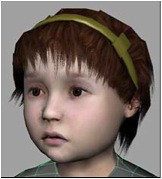 “Are you hiding from the monsters too?”

Lynn is a special kid, a thinker. She seems to carry a potent knowledge within her. She comes off as very mature for her age, very serious and very solemn. The daughter of Ellen Silverman, captured simultaneously on the Newland transport. She managed to sneak away into the vent-system of Athena after seeing her father turned into a ghost drone. She’s been hiding away for about a week when Riddick arrives. 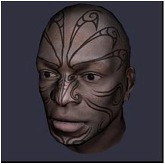 “So… Have you worked out a plan yet, tough guy?”

An ex merc who used to work for Revas. He’s rotten to the core despite the nice guy picture he tries to paint of himself.  Jaylor desperately wants vengeance on Revas and the Dark Athena for turning on him. Before joining the Athena, he was a reject from the Outzones with no sense of right or wrong. His version of a good time is pillage and rape. 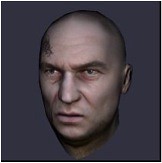 “I’ll take care of him, Captain. He’s going off the books an’ I ain’t saying nothing…”

Spinner was with the mercenary squad who captured Revas during the Sol Lucian wars. He grew up in a wealthy family, but got sent to a military academy because of his attitude problems. The army nurtured his killing instincts and turned him into an assassin and soldier of top quality. He’s the one who’s always stood by Revas’ side. Perhaps he has feelings for her, perhaps trying to make peace with something from his past, what he’s definitely after is to inspire fear and create chaos – because that’s the only way to get people to listen to him. There’s only one person who he answers to and that’s Revas. She has him in his grasp. He can never escape it. 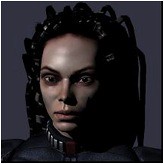 “We are alike. Two souls steeped in the blackness of space.”

Revas is approximately 40-45 years old at the time of Dark Athena, and has had a long and spectacular career as a mercenary. She’s intellectual, jaded with life and hates disloyalty and cowards. Being a grizzled veteran of war and death, she’s a combat expert surpassing most in skill and brutality. She respects talented individuals, people who can match her skills both intellectually and physically. Avoiding any emotional attachments, she has her own stable of lovers, both male and female who she can enjoy the joys of physical pleasure with, no strings attached. Revas has a lot of rage and dangerous emotions pent up due to her tough childhood growing up as an orphan in the worst slums of Sol Lucia.