Buy everything, buy nothing, still the best time to play MKX 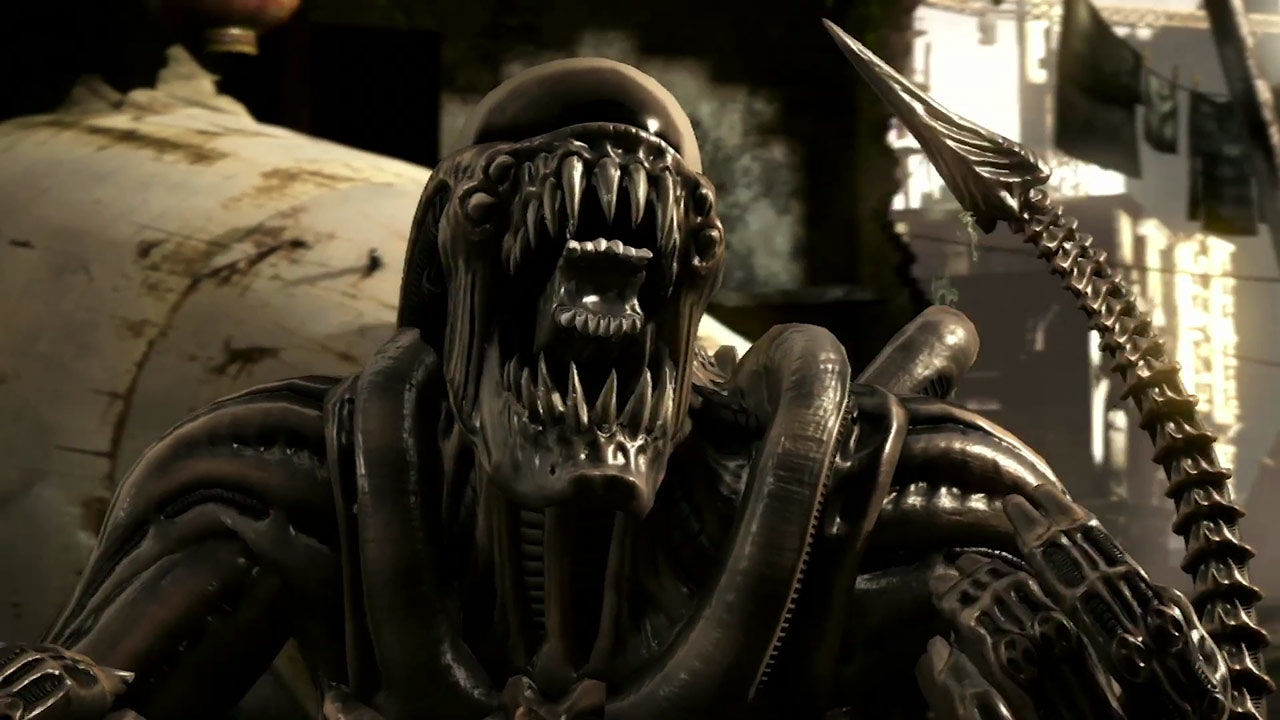 I’ve been playing Mortal Kombat XL like a fiend over the past week and I want to talk about my impressions of it — what the new characters are like, whether it’s a good value, all that jazz. But, I can’t do any of that before I address the elephant in the room. A lot of the conversation around MKXL is going to revolve around its value, and you can’t talk about that without acknowledging it’s main rival, Street Fighter V, which launched last month as a skeleton of a game. Capcom’s  new fighter has no story mode, no trials, broken lobbies — hell, not even a proper arcade mode. It’s where the comments are inevitably going to go, so let’s just address it head-on. When looking at the two games purely in terms of content provided, MKXL is the luxury yacht to SFV‘s leaky rowboat.

I know it’s not entirely fair to compare an expansion of a preexisting game to one that just launched, but I can’t help but marvel at the gulf between the two. MKXL comes with a complete cinematic story mode (that actually moves the plot forward in interesting ways if you care about that sort of thing), a huge selection of characters, over a dozen stages, plenty of unlockable costumes, Easter eggs, secrets, and alternate game modes (challenge towers, faction war stuff, test your luck, etc). Not all of it is completely engaging or mind blowing, but it’s there if you want to dig into it. This is what a $60 fighting game should look like, not some bizarre layaway program where you can play part of the game now while the rest of it drip-feeds into place over the next few months.

Of course, MKXL is only $60 if you haven’t bought in on any other version yet. How much you’ll get out of it depends on how much you’ve already spent on Mortal Kombat X, and how much you enjoy the new content in the XL pack. 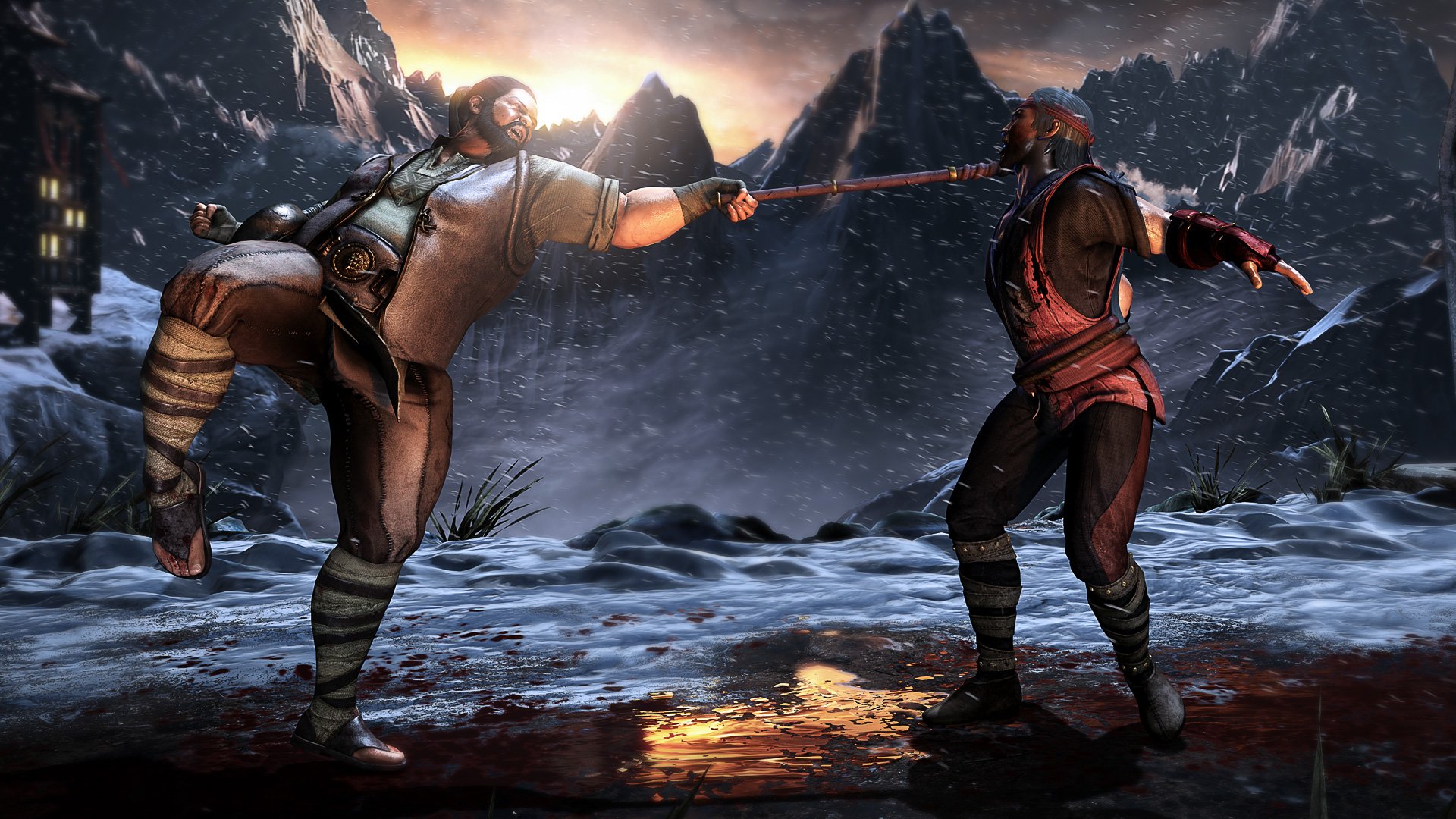 The core of the XL pack is the addition of four new fighters. This includes a couple of horror movie icons, Leatherface and Alien‘s Xenomorph (with Baraka-style arm blades and a goofy posture because Mortal Kombat), along with two returning MK standards, the drunken Bo’ Rai Cho and Triborg. The latter is particularly interesting because he’s basically four separate characters in one. Each of Triborg’s variations represent a vastly different play style with only a few basic moves and a ridiculous head of wire-dreads in common.

The new characters are a welcome addition to the cast. Leatherface is appropriately terrifying when waving his chainsaw and hammer about and has some of the most appallingly violent brutalities in the game. The psychopath has some interesting options between his variations and a few sly references I’m sure horror fans will enjoy. The Alien is an annoying asshat of zoning traps, high-pressure rushdown, and health-eroding acid damage, perfect for players who like to torment their opponent. Bo’ Rai Cho, well, he farts on people? To be honest, Cho is a scary combo beast with fascinating options (I just can’t get over how juvenile his bit is). The Triborg posse completely dominates in all kinds of creative and soul-destroying ways. No matter what variation you play as, it’s a blast to freeze, buzz-saw, and incinerate the competition as a dime-store Ironman ninja.

My only concern with the new cast members is that they seem suspiciously good in some cases. The Xenomorph gets a lot of free damage for seemingly little effort, while some of the shenanigans the cyborgs can get up to across variations are absolutely nightmarish. It’s too early to make a call, but I worry Triborg (in whatever flavor) is going to prove overpowered once players get a grip on him. Combine this with recent balance nerfs to the previously dominant DLC characters, Tanya and Tremor, and it establishes a rather grimy pattern of NetherRealm nudging players towards paid upgrade characters. Maybe I’m being uncharitable, but it smells fishy.

New characters aren’t the only thing in the XL pack, though. It also includes all the previously released DLC, this means Goro, the Kombat Pack 1 characters (Jason, Predator, Tanya, and Tremor), and several character skin packs. All of this totals up to a pretty significant amount of content. With 33 characters, each of whom have three (and in one case, four) variations each, there is tons of match-up specific knowledge for hardcore fighting vets to bite into, and plenty of variety for more casual fighting fans to mess around with. 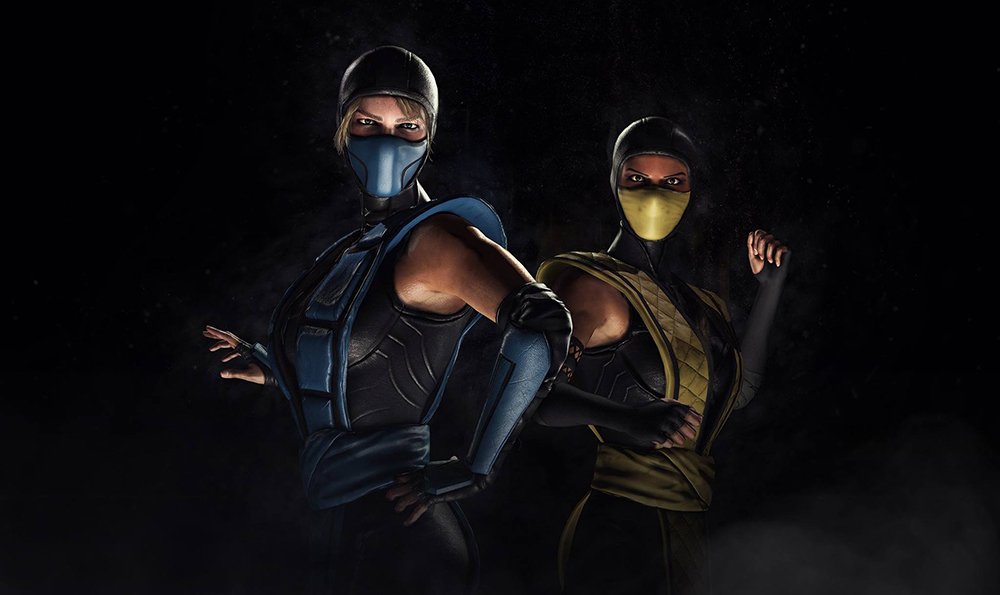 More interestingly are the additions that come regardless of whether or not you buy the XL pack. Free additions to the game include the return of The Pit stage, new stage fatalities not just for The Pit, but also for two previously released stages, and most importantly, improved netcode. This is the secret triumph of the XL update, and it’s totally free.

MKX has always suffered from a below-standard online experience. It wasn’t always awful, but it was rarely great. Noticeable frame delay on even decent connections made online play more of a dice roll than most players would like to admit while bad connections were completely unplayable. That’s gone. As someone who has spent the last month largely as an online warrior, the new roll-back system is like night and day compared to the previous experience.

While terrible connections will still be terrible, decent connections play like a dream. Reversals come out when intended, combos don’t drop on the whims of fickle data-blocks, and your victories and defeats feel like a result of skill, not luck. It’s a huge improvement. Even if you don’t want to pay a single red cent, don’t care about the new characters, and have active disdain for costume skins, there has never been a better time to play MKX. Dust off your copy even if you shelved it months ago. 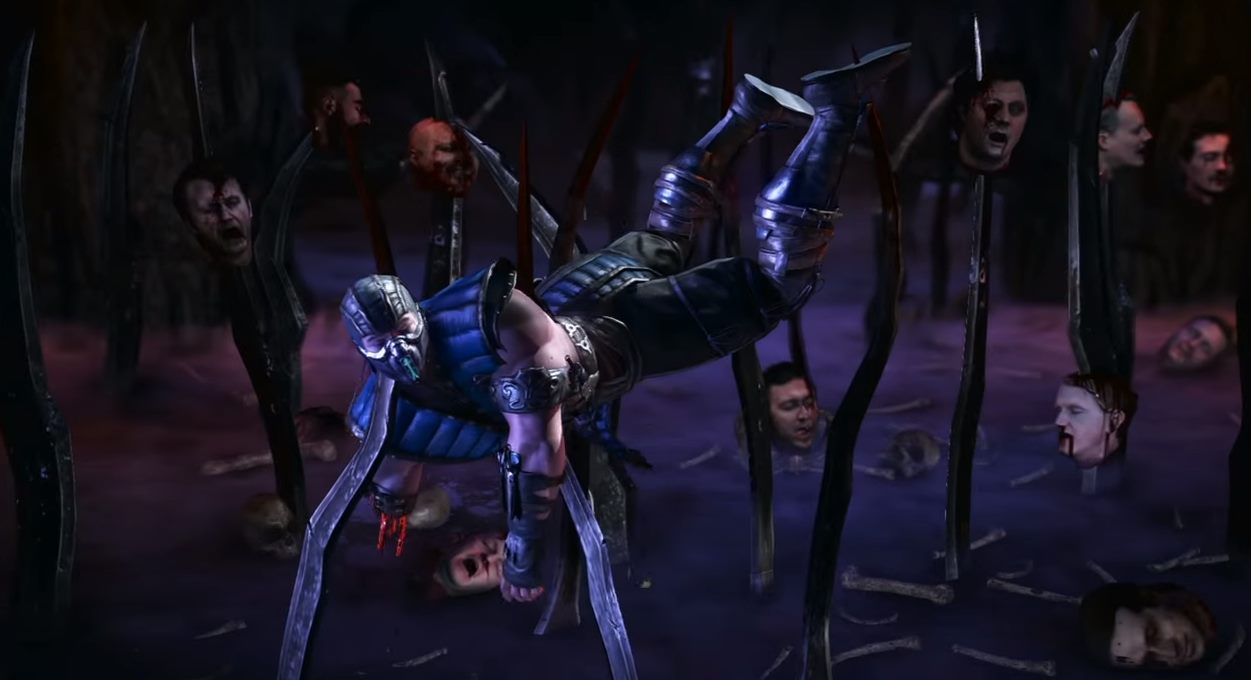 So, is MKXL worth the price? Value has always been a prickly issue for MKX, and for good reason, some of the earlier microtransaction stuff included at launch was truly beyond the pale. “Press X to buy Goro” right in the character screen, unlocking the Krypt content for $20 (basically paying to not play the game), consumable easy fatality inputs sold for a few dollars at a time — pee-ew. That shit was gross and deserved to be called out for the money grab it was.

The value on the XL pack is a little harder to quantify though. If you haven’t bought any version of the game yet, the $60 retail MKXL disk is one hell of a good deal. It is a huge package of great fighting game content. If you bought the retail game but skipped on the first Kombat Pack and didn’t dip into any extra skins (my situation), the XL upgrade is phenomenal in my opinion. $25 dollars for eight new characters, Goro, and tons of skins isn’t the worst purchase I’ve ever heard of.

But, the more money you’ve already put money into the game, the worse the value gets. If you paid the Goro danegeld, bought Kombat Pack 1 (or God forbid bought the characters piecemeal), and loaded up on silly soccer skins and classic fatalities, the XL pack is just another steeply-priced DLC character pack.

My own personal journey with MKX has been an expensive one. I originally bought the game for PC to do a port report after Warner Bros. refused to provide us with a code (for reasons that quickly became obvious). Despite being completely burned on that broken port (that the publisher would later abandon), I eventually broke down and bought the base retail game on PS4 (about a week before the XL edition was announced, natch), where I’ve played it non-stop since and paid out of pocket for the XL expansion. That’s a lot of money, but, I don’t feel that bad about it. I can honestly say that I’ve had so much fun, and so many hours of entertainment, with MKX that I just can’t bring myself to be mad about it (even though I probably should be).

On one hand, MKXL represents what’s wrong with fighting games. It is a package that actively punishes the game’s biggest fans for supporting it on release and throughout its life, while reinforcing the (not incorrect) idea that only suckers buy at launch. On the other hand, it also represents what we should demand from fighting games. A full release with tons of single player content to enjoy, a great online experience, and a wide roster of different characters and playstyles to explore. While other titles are struggling to include even the basics, MKXL has the polish to account for dumb little things like getting the voice actors back for new pre-fight interactions, and stupid little Easter eggs and jokes. It feels like a full game’s worth of content and then some. 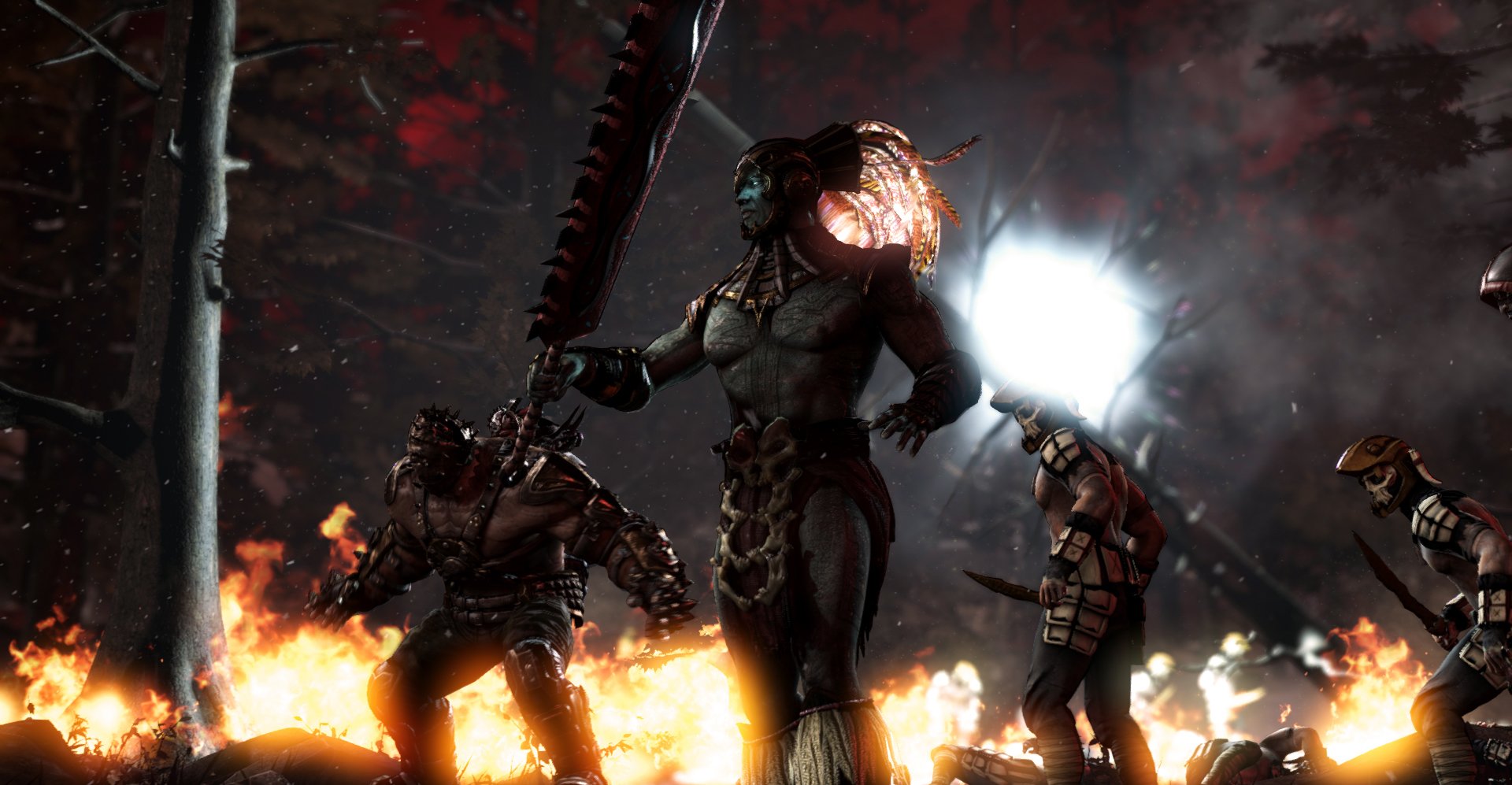 MKX was good, but the XL pack makes it great. If you waited for this version since day one, congratulations, you’re getting an amazing deal. If you’re paying to upgrade, it might sting, but the netcode improvements and slew of extras help soothe the pain. If you’re looking between two recent major fighting game releases and struggling to figure out which one is the better value, you may strongly want to consider the one that’s actually finished.