I was twelve years old when Mortal Kombat first appeared in arcades. At that age, my parents probably were not being over-protective in forbidding me to cross the busy intersection which bordered our suburban housing development. Once the pizza parlor on the far side acquired one of these bloody, fighting machines, the consequences of breaking this rule seemed insignificant. The compulsion to play became so great that any punishment would be preferable to denying myself its pleasures.

Like with many classic 2D franchises, I lost interest when the series made the jump to 3D and my love for the games has never been the same since. I would try a Mortal Kombat game for a few hours and then just long for the over-the-top ridiculousness of the original games in the familiar format I remembered it in.

I never thought I would get that feeling, that inexhaustible need to defend Earth from the forces of Outworld again. I was so very, very wrong.

When I was given the opportunity to see Mortal Kombat in a closed door session at E3, I was immediately assailed by the familiar. Two warriors standing in an arena, an imposing Shao Khan watching from a spike-adorned throne and a roaring crowd made up of low-resolution, motion-captured figures. It certainly looked like the Mortal Kombat of old and the title seems to be making a real push to recapture the essence of the classic series.

Even if this reboot were nothing more than an old game with a fresh coat of paint, that paint job is damn impressive. The characters are dirty and gorgeous and animate beautifully. I also couldn’t help but notice while watching Mileena in action that the designers at NetherRealm Studios are taking a page from the Dead or Alive playbook. The physics were in full effect, if you take my meaning.

That physics engine is doing a lot more than making computer generated jubblies jiggle, however. The iconic sprays of blood players of the series are familiar with act in a dynamic fashion, splashing in pools on the ground and landing on characters where it sticks and adds an additional level of gore to the proceedings. Not only will you be able to become covered in your opponent’s red kroovy, but character models will now reflect damage done to them in the course of the fight which looks really impressive as battles wear on. 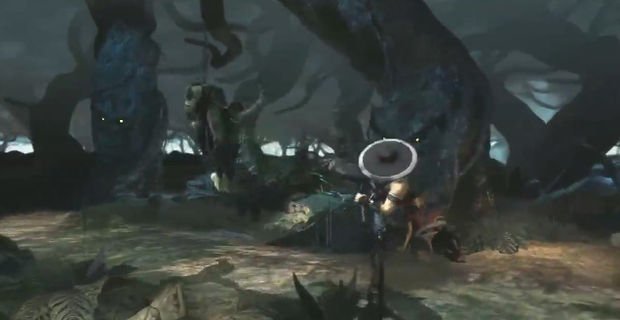 The game plays a fair bit faster than past iterations tend to, and has some other features found in modern fighting games. A super meter has been added which increases as you take and receive damage with three levels granting access to different abilities. The first stage allows you to perform a more powerful special attack, while the middle is used as a combo breaker. But the peak is where things get really interesting.

See, the character models in Mortal Kombat aren’t all about external appearances. They’re beautiful on the inside as well. The team is modeling every character inside and out and this is no better demonstrated by one of the most devastating moves in a player’s arsenal: the X-Ray Combo. When used, characters launch into a multi-hit attack which can deal crippling damage. Going into a cinematic event for the combo, the action slows as each blow strikes and the skin and musculature of the victim peel away to show you the impact on skeletal structure and organs.

Upon witnessing it, I was utterly shocked by the brutality of the sequence. Body parts twist in unnatural fashion with cracking and snapping sounds intense enough to give me a bit of the willies. The sheer force of the attack sequence reminded me of the visceral and haunting sequence in Fight Club where Edward Norton beats the living hell out of Jared Leto on a cold floor, the exterior noise of the crowd muffled and the only clear sound being the thud of fist against flesh and bone.

Fatalities are also back in a big way. Every character will have the finishing moves, as would be expected, and they’re all original and character-specific. In fact, great effort has been made in making each character behave in a manner consistent with who or what they are.

As an example, I was shown a new two-on-two gameplay mode which functions in a similar manner to the vs. Capcom series. The secondary character can be called in to perform a support attack and swap out with the current character either in an attack for combo chaining or a more passive entrance. Even the entrances and exits of the characters are tinged with their flavor. Sub-Zero hops out by turning to ice which then erodes off the screen, while Scorpion drops to the Netherworld in a geyser of flame. While not a significant gameplay feature, it does speak to the attention to detail NetherRealm Studios is pursuing in making each character feel and look unique and appropriate for their personality and ability.

The game is shaping up to be flavorful, fun and unabashedly violent. Fans of the older games will feel right at home with the atmosphere and gameplay, while those who prefer the Street Fighter experience may find themselves surprised at how the pacing of this game more closely reflects that of that venerable franchise. Easily among the most impressive things I observed at this year’s show, Mortal Kombat is high on my list of games to watch as time marches towards its 2011 release.