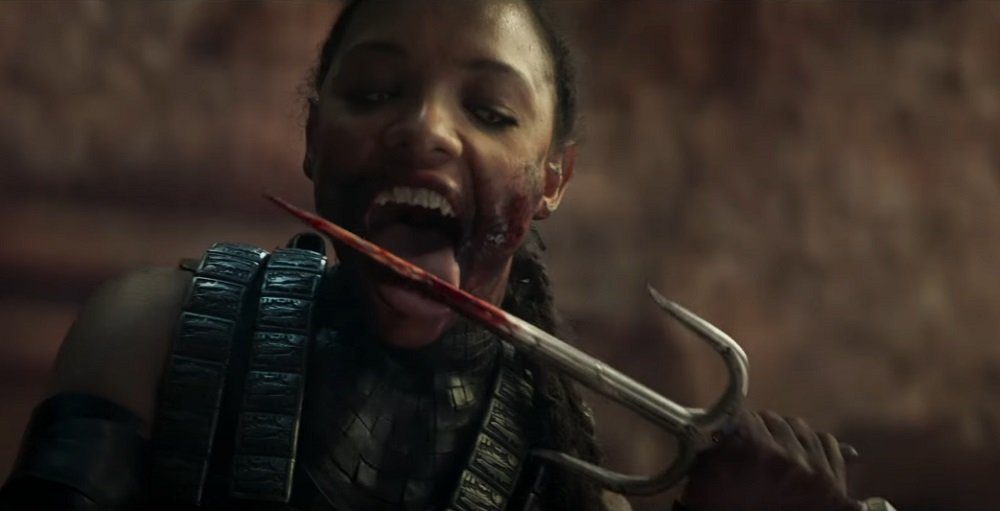 Fans have been waiting a long, long while, but after a year of production woes and calendar shifts, Warner Bros. has finally released the trailer for Mortal Kombat, the upcoming cinematic adaptation of NetherRealm Studios’ legendary fighting game franchise.

The new film will take the MK story back to its roots, as a cast of the series’ original characters (as well as a few sneaky sequel stars) will defend Earthrealm in a brutal and hellish hand-to-hand fighting tournament, presided over by Outworld’s malevolent sorcerer, Shang Tsung. Led by Thunder God Raiden, this motley crew of warriors will face off in a violent battle for personal pride, vengeance, and the fate of the very universe itself.

But enough of my yakkin’, y’all know the plot, so let’s get to the NSFW action.

As some of y’all may know, I’m not only a dyed-in-the-wool Mortal Kombat fan, but I’m also a trailer collector, and I’ve seen enough previews to know you can make anything look better than it might be with a well-made, well-edited preview. That said, I will admit I’m far more impressed than I expected to be. The visuals are neat, the character designs are contemporary but recognizable, and the showpiece battles look pretty damn exciting. It’s the earliest of days, but the trailer has instilled more confidence in me than I had before. And hell, they didn’t resort to a slow bass needle-drop into hip-hop, OR a breathy slow cover of an ’80s classic.

Also, Kano looks like a right bastard. I’m in.

Mortal Kombat will premiere in theaters and on HBO Max on April 16. This day-and-date theater/home release has been adopted by Warner Bros. for its entire 2021 release slate, due to the ongoing COVID-19 pandemic keeping people indoors and away from the cinema. This strategy will see upcoming releases including Denis Villeneuve’s Dune, DC Comics’ Wonder Woman ’84 and The Suicide Squad, the fourth chapter in The Matrix franchise, and even Space Jam: A New Legacy made available via the paid streaming service at launch.

Oh, and if Shao Kahn and Sindel show up in a post-credits sequence, I might not survive.